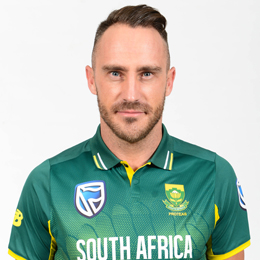 One of the batting mainstays of the South African middle order, Faf du Plessis has proved an able successor to the legendary Jacques Kallis, albeit only with the bat. However, unlike his school friend AB de Villiers, Faf didn't exactly take the swift route to the national side and came into the team only when his Kolpak deal with Lancashire had expired. The former's stonewalling 110* to save the Adelaide Test catapulted him to instant stardom and established him as one of the key members of the Protea side. Later appointed full-time captain of the team, Du Plessis has emerged as a natural leader, especially in Tests. But given the long list of disappointments faced by South Africa at World Cups, Faf's credentials would be carved in stone if he can lead his team to glory in the marquee event.