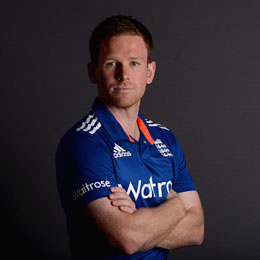 England's limited-overs captain Eoin Morgan is known to be a man with cool temperament and strong convictions. Captain Morgan has earned respect from his players with the help of his inner strength and tactical intellect. Having played for Ireland well before his England debut in May 2009, the Dublin-born left-handed batsman never thought he would captain the England national team in future. He debuted for England in a T20I match against West Indies at Lord's, where he remained not out for 2 runs. Besides the ODIs, Morgan impressed with his stylish shot selection and grit in T20Is as well. Soon after his ODI debut for England, Morgan made his T20I debut against Netherlands at Lord's. However, he couldn't make his name much in the longest format after playing his first Test against Bangladesh at the same venue in 2010.

England captain Eoin Morgan smashed a world record 17 sixes in his blistering 71-ball-148 as the hosts crushed Afghanistan by 150 runs in a World Cup encounter.

England scripted a remarkable turnaround in the limited over series against India by clinching the three-match ODI rubber 2-1.

Cricket fans are anxiously waiting for the action to start on the ground. Meanwhile, here are the eight players to watch out for in the forthcoming IPL 2016.