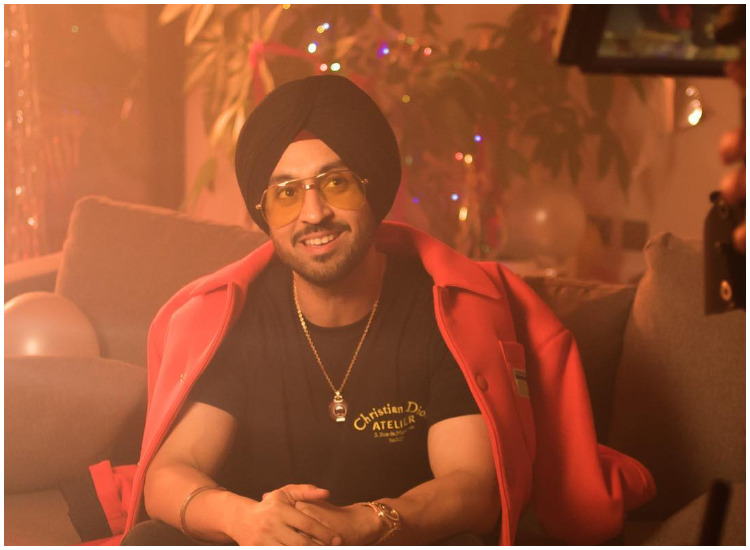 Born in Punjab, Diljit Dosanjh is a singer and a versatile Indian actor. One of the celebrated artists in the Punjabi music industry, Diljit made his Bollywood debut with Udta Punjab in 2016. The actor also won the Filmfare Award for Best Male Debut for his first Hindi film.

Diljit Dosanjh caught everyone's attention when he got trolled for a particular photo in which he was seen refilling his fuel tank at a fuel station all by himself, in a foreign land. A user was quick to respond to his post and trolled him by making fun of the actor-singer for refuelling his car himself. However, he responded to his comments and replied in the most savage manner.

Punjabi pop star Diljit Dosanjh turned a year older on January 6 (Thursday). Many celebrities poured in their heartfelt wishes for the 'Lover' singer. Singer-actor Ammy Virk took to his Instagram Story and shared a picture of him and Diljit at an awards ceremony, along with veteran singer Gurdas Maan.

Set in Vancouver, Canada, Honsla Rakh is about a lovable, rooted, desi, Punjabi young man, a single father whose life centers around his 7-year-old son. The film stars Shehnaaz Gill, Diljit Dosanjh and Sonam Bajwa in the lead roles.

Diljit Dosanjh, Shehnaaz Gill and Sonam Bajwa's film is breaking box office records. Diljit shared a report on his Instagram account and thanked his fans for their support and showering the film with love.

Diljit Dosanjh's post comes after Shehnaaz Gill joined him and Sonam for the promotions of 'Honsla Rakh'. The actress had missed the early promotions of the film after the sudden demise of her close friend and rumoured boyfriend Sidharth Shukla.

While promoting her upcoming film Honsla Rakh, starring Diljit Dosanjh and Sonam Bajwa, Shehnaaz Gill opened up about her character, love and emotional support. This is the first time that she interacted with media post Sidharth Shukla's demise.

If you're eagerly waiting for the film Honsla Rakh to release in theatres, here's each and every possible piece of information about the Diljit Dosanjh, Sonam Bajwa and Shehnaaz Gill starrer curated just for you!

A new song from Diljit Dosanjh, Shehnaaz Gill and Sonam Bajwa's Honsla Rakh was released by the makers. Sung by Diljit Dosanjh, the song 'Lalkaare' has lyrics by Happy Raikoti and composition by Avvy Sra.

Bigg Boss 13 contestant Shehnaaz Gill, who has been grieving the loss of her rumoured boyfriend, actor Sidharth Shukla, is all set to return on screen with her debut film, Honsla Rakh co-starring Diljit Dosanjh.

After laying low for almost a month, Shehnaaz Gill finally made her appearance in order to promote her upcoming film 'Honsla Rakh.' Sailing in the same boat, she featured in a new video shared by her co-star Diljit Dosanjh in which she can be seen acting one of the dialogues from their Punjabi film. However, what caught everyone's attention was the sadness in Sana's eyes.

Honsla Rakh: Shehnaaz Gill's co-actor Shinda Grewal shared a video of him and the actress from the sets of the film. Watch

'Lover' from Diljit Dosanjh's album 'Moon Child Era' is topping charts with several reels being made on it. Joining the trend are Bollywood actors Kiara Advani and Varun Dhawan. Watch their fun video here!

The trailer of Honsla Rakh has met with a positive response from fans. While Diljit's fans can't stop praising the actor, Shehnaaz's fans are imagining how late actor Sidharth Shukla, who was a close friend of the actress would have reacted to the trailer.

Honsla Rakh Trailer Out: Diljit Dosanjh-Shehnaaz Gill's laughter ride is all about 'parenthood'

The makers of 'Honsla Rakh' have finally released the trailer of the movie. The much-anticipated Punjabi film stars Diljit Dosanjh and Shehnaaz Gill in pivotal roles.

Diljit Dosanjh shared the first poster of the film Honsla Rakh featuring Shehnaaz Gill and Sonam Bajwa and announced that the trailer will drop on Monday. The film is set to hit the screens on October 15.

Ever since actor Sidharth's death, fans and colleagues alike have been worried about Shehnaaz Gill. Recently, the makers of her upcoming film Honsla Rakh with Diljit Dosanjh shared an update.

Deepika Padukone hosted a question and session for fans where she disclosed that singer Diljit Dosanjh's latest hit 'Lover' is her current favourite song. Here's how the singer reacted.