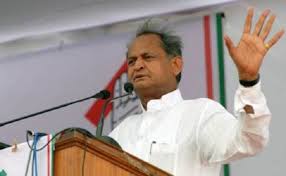 Ashok Gehlot is the 15th chief minister of Rajasthan. Earlier, two-time Rajasthan Chief Minister, Gehlot represents Sardarpura constituency in the 200-seat Rajasthan Assembly. He contested 2018 Rajasthan Assembly election against Bharatiya Janata Party candidate Shambhu Singh. Born on May 3, 1951, Gehlot has served as Rajasthan CM from 1998 to 2003 and again from 2008 to 2013. A science and law graduate, Ashok Gehlot also holds an MA degree in Economics. Gehlot has also served as Union Minister of State for Tourism and Civil Aviation from September 1982 to February 1984. Gehlot is one of the few leaders who have worked under three PMs - Indira Gandhi, Rajiv Gandhi and PV Narasimha Rao.

The Punjab Legislative Assembly on Tuesday unanimously passed four bills and adopted a resolution against the farm laws enacted by the Parliament last month.

Gehlot govt to bear 90% cost for development of madrasas

Aiming at the development of madrasas in Rajasthan, the Gehlot government on Friday announced that it will bear 90 per cent cost of the development while the remaining 10 per cent will be incurred by the madrasa board.

The family of the Rajasthan temple priest Babulal Vaishnav, who was burnt alive by land mafias in Karauli for resisting to allow the temple land being taken over by encroachers, on Saturday performed the last rites of the slain priest after they were assured of Rs 10 lakh financial assistance, a government job and a house under PM Awas Yojana.

Taking cognisance of the incident where a temple priest was burnt alive by the land mafia, Rajasthan Governor Kalraj Mishra on Saturday spoke to Chief Minister Ashok Gehlot on the phone about the situation.

Rajasthan Chief Minister Ashok Gehlot on Friday urged the Centre to postpone JEE and NEET entrance examinations amid the COVID-19 pandemic. He said that lakhs of students and their parents were concerned about their health.

Rajasthan: Ashok Gehlot has clinched a decisive victory in his battle to save his government.

The Ashok Gehlot-led Congress government is set to move a confidence motion in the Rajasthan Assembly during the session beginning today. Pilot had led a rebellion against Gehlot, seeking a change in the party’s leadership in Rajasthan. At the CLP meeting held at his residence, Gehlot urged Congress MLAs to forget the acrimony of the past month and move on.

In a big development right since the rift between the two, Sachin Pilot and Ashok Gehlot on Thursday came together on a stage for Congress Legislative Party meeting.

Though differences between Sachin Pilot with the party leadership may have been moving towards an end after Congress decided to constitute a 3-member panel to listen to Pilot's grievances, BJP in Rajasthan will move a motion of no confidence in the state assembly against the Ashok Gehlot govt.

Natural for MLAs to be upset, need to bear to save democracy: Ashok Gehlot

Rajasthan Chief Minister Ashok Gehlot on Wednesday said resentment among the Congress MLAs lodged in hotels for a month since the crisis broke out was natural but he has exhorted the legislators to "bear it" to save democracy.

WATCH: 'I love you' chants greet Sachin Pilot as he walks past his supporters in Jaipur

A smiling Pilot, walked amidst the throng of his supporters with folded hands, bowed and waved to them as he reached his residence in Jaipur, driving down from Delhi this afternoon.

The Congress has finally agreed to constitute a three-member committee to address the grievances raised by Sachin Pilot. Earlier in the day, Pilot met senior party leaders Rahul Gandhi and Priyanka Gandhi for the first time since the political crisis in Rajasthan began.

Sachin Pilot will remain in Congress, party says will address his grievances

Sachin Pilot will remain in Congress, said the part on Monday after the rebel leader met with Rahul Gandhi, Priyanka Gandhi Vadra in New Delhi. More to follow.

Rebel Congress leader Sachin Pilot on Monday met party leaders Rahul Gandhi and Priyanka Gandhi Vadra in Delhi amid speculations over a possible breakthrough in Rajasthan ahead of crucial assembly session that is scheduled to commence from August 14.

Rajasthan chief minister Ashok Gehlot on Wednesday said the focus should be on establishing an egalitarian society based on the values espoused by Lord Ram, who holds a unique place in our culture and civilization.

CM Gehlot lacks numbers, does not trust his MLAs: BJP

Rajasthan BJP president Satish Poonia on Saturday attacked Chief Minister Ashok Gehlot, saying he does not trust his MLAs and lacked the numbers to prove majority in the assembly.

Accusing the BJP of adopting double standards over the merger of six BSP MLAs with the Congress in Rajasthan, Chief Minister Ashok Gehlot on Friday reminded it about the induction of four TDP Rajya Sabha MPs into the saffron party last year.

Rajasthan crisis: Congress MLAs to camp together till the assembly session

Rajasthan Congress is closing its ranks for what can be a mega showdown on the day of the assembly session. Rajasthan Governor Kalraj Mishra has called assembly session on August 14 and it is likely that confidence vote will be held.