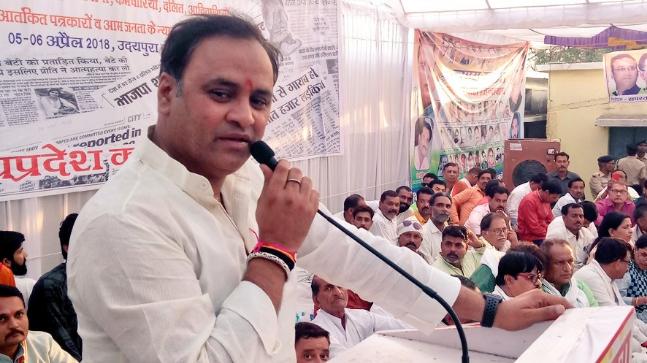 Arun Yadav was a member of 14th and 15th Lok Sabha and is a member of the Congress party. He was appointed as president of Madhya Pradesh Congress Committee (MPCC) on 13 January 2014. Kamal Nath replaced Yadav in April this year. Elder son of Subhash Yadav and Damyanti Yadav, he is pitched in electoral battle against Madhya Pradesh's three-time Chief Minister Shivraj Singh Chouhan. He finished his schooling from Daly College, Indore and graduated with Bachelor of Commerce from S.S. Subadh Jain Commerce College, Jaipur, Rajasthan.

The bypoll, necessitated due to the death of BJP MP Nandkumar Singh Chauhan, will take place on October 30.

Sharma and Patwari are holding the portfolios of Law and Legislative Affairs Minister, and Higher Education Minister respectively in the current Kamal Nath-led Congress government in the state.

Jhabua: Police on Wednesday detained the wife of prime accused Rajendra Kasawa, who is wanted in connection with last week's massive blast in Petlawad town that left more than 100 people dead."We have detained his

New Delhi, July 12 :  Vilas Muttemwar, who today missed the bus to the Union Cabinet, was made Congress General Secretary while Arun Yadav was named party Secretary after he was dropped from the Ministry.