The ECI recommended to the President the disqualification of 20 legislators who were appointed as parliamentary secretaries by the Arvind Kejriwal government in Delhi.

The Delhi High Court on Friday evening refused to pass any interim order of protection to AAP MLAs, whose names have been recommended for disqualification as legislators by the Election Commission of India (ECI) for holding office of profit.

Justice Rekha Palli, however, asked the ECI to inform it on January 22 whether the recommendation has been communicated to President Ram Nath Kovind, as the MLAs have sought that they be heard by the poll panel if no such communication has been made.

20 Delhi AAP MLAs face disqualification: All you need to Know about 'Office of Profit' case

The order was passed late in the evening as the poll panel's lawyer, Amit Sharma, said he was not aware whether the recommendation has been sent to the President. On being asked by the court to check with the ECI, he said he was unable to get in touch with them in this later hour.

The ECI recommended to the President the disqualification of 20 legislators who were appointed as parliamentary secretaries by the Arvind Kejriwal government in Delhi.

During the hearing, the court made it clear that it was not inclined to pass any interim order in view of the conduct of the MLAs in the proceedings before the poll panel. It was displeased by the MLAs' conduct of telling the poll panel not to go ahead with the matter as the issue has been challenged in the High Court.

The court was referring to the MLAs' petitions filed in August last year challenging the poll panel's decision to continue hearing a complaint against them for allegedly holding office of profit.

Advocate Manish Vashishth, appearing for one of the disqualified MLAs, Sharad Kumar, told the court that the poll panel has not heard them before arriving at the decision to disqualify them. He also said that till date, the ECI has not filed its reply to their petitions filed in August last year.

The court then asked the lawyer for the ECI, why no reply has come yet from the poll panel.

"There are 20 people involved in it. How can you take it so lightly," the court asked, after which the lawyer for ECI said a reply would be filed in two weeks in the main petitions in which the applications were today moved challenging the poll panel's recommendation to disqualify the MLAs.

Hours after the ECI recommended their disqualification, the affected MLAs mentioned the application before a bench headed by Acting Chief Justice Gita Mittal for urgent hearing, which was listed before Justice Palli. The hearing on the matter began around 5.30 PM.

Earlier in the day, the ECI had recommended to the President the disqualification of 20 AAP MLAs for allegedly holding offices of profit. In its opinion sent to the President, the ECI said by being parliamentary secretaries, they held office of profit and were liable to be disqualified as MLAs of the Delhi Assembly.

The petition before the ECI was filed by one Prashant Patel against 21 MLAs who were appointed as parliamentary secretaries by the AAP government in Delhi. 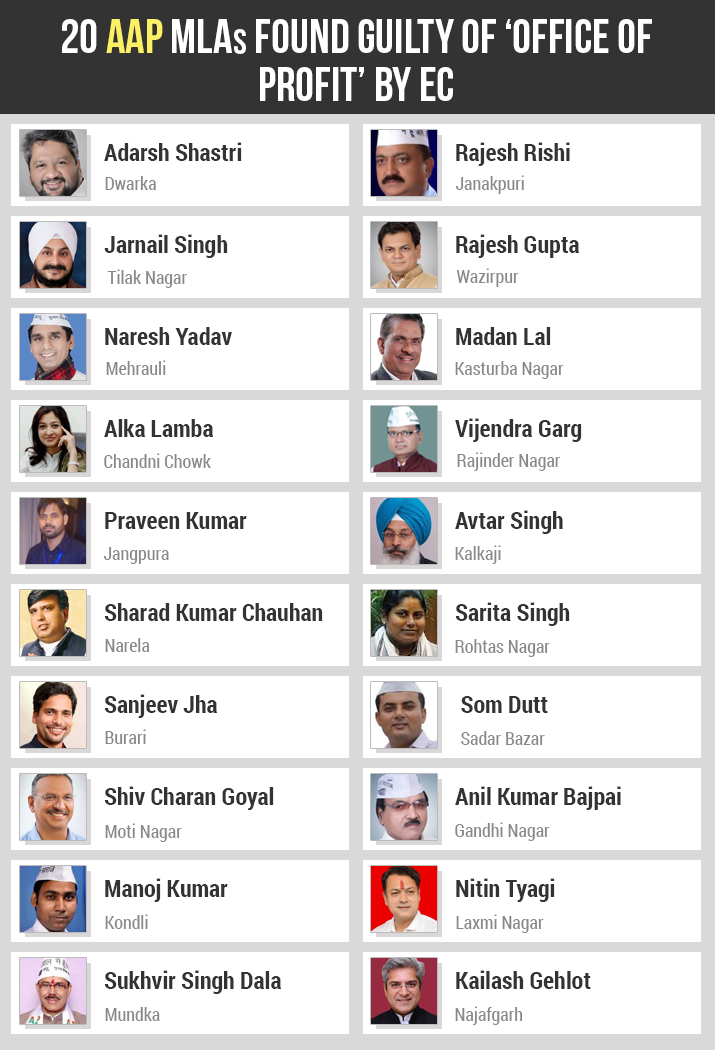 In their pleas, they have sought a stay on the proceedings before the ECI as well as any communication to the President by the poll panel. They have contended that no hearing on the merits of the case has taken place before the ECI and no evidence has been even led by complainant Prashant Patel, nor any opportunity has been granted to the petitioners before the ECI.

The poll panel's recommendation to the President gave fresh ammunition to the two opposition parties to target Arvind Kejriwal's AAP which emerged as a big political force seeking to fight corruption and bring probity in politics.

Both the Congress and the BJP, which suffered badly in the AAP surge that almost wiped them out in the last assembly polls, demanded Kejriwal’s resignation and said that they were ready for elections.

Delhi Congress chief Ajay Maken said Kejriwal has no "moral right" to continue in power and should resign. He also said the Delhi Congress will launch a 'Jan Andolan' from January 22 demanding the Kejriwal government's removal and expose him on the issue of corruption, on which he contested and won elections.

"Arvind Kejriwal has no moral right to be in power and he should resign. Half of his cabinet ministers have been removed on corruption charges and the remaining half are embroiled in corruption too. Twenty of his MLAs, who enjoyed ministerial perks, would be disqualified now," Maken told reporters.

Maken said the Delhi Congress was ready for polls and held a meeting with its former MLAs representing these seats to gear up for fresh elections. He said Congress leaders have represented some of these seats 4-5 times and the party is prepared for elections. He said the Congress will launch a protest from January 22 by holding 'dharnas' in each of these 20 constituencies to "expose the double standards" of the Kejriwal government.

"We are happy the Election Commission has taken this decision," Maken said, recalling how in June 2016 the Congress has petitioned against 21 AAP MLAs for holding offices of profit.

“Where is Lokpal? The MLAs and ministers enjoying perks of power and foreign travel - Where is political probity? " he tweeted.

On the other hand, Delhi BJP chief Manoj Tiwari lauded the EC's recommendation to the President, saying it is a "moral defeat" for Chief Minister Arvind Kejriwal and that he should resign. He said the BJP stands prepared for elections any moment.

"We welcome the EC decision disqualifying 20 AAP MLAs. Arvind Kejriwal should take responsibility for moral defeat and resign," he said.