Delhi CM Arvind Kejriwal’s decision to disown councillor Tahir Hussain, after he was named as an accused in the alleged killing of Intelligence Bureau (IB) staffer Ankit Sharma, doesn’t seem to have gone down too well in Mustafabad

Locals in northeast Delhi’s Mustafabad constituency are reluctant to talk to strangers at first, as wounds of last week’s violence that rocked the locality still fester in their minds. The constituency near the border with Uttar Pradesh was one of the worst-hit during the riots, as armed men descended upon the neighbourhoods here and ran amok, targeting local residents and businesses.

However, Kejriwal’s decision to disown councillor Tahir Hussain, after he was named as an accused in the alleged killing of Intelligence Bureau (IB) staffer Ankit Sharma, doesn’t seem to have gone down too well with the locals.

“If someone attacks your home, wouldn’t you fight back,” says Zakir, who runs a showroom in the locality.

“Tahir has already said that he was rescued by the police and his house was overtaken by rioters, who used it as a base,” the businessman adds. Tahir Hussain’s house is in Chand Bagh, falling in the same constituency.

While AAP did manage to win the seat in the election, Kejriwal’s popularity in the district seems to have taken a further hit. Zakir’s showroom has a banner outside, which points toward Kejriwal’s “silence” on the Citizenship Amendment Act.

“Don’t we see how he is meeting the Prime Minister and the Union Home Minister,” asks Zakir, clearly not amused at the three-term Delhi chief minister’s silence on the provocative speeches of the BJP leaders.

“His name will be cleared by the court. We have full confidence about that,” reckons Zakir.

Saleem, another local, alleges that a close associate of losing BJP candidate Jagdish Pradhan, was publicly threatening the Muslims in the neighbourhood.

“They are after Tahir Hussain. But, what about these people. Look at the hate this person (Amit Sharma, alleged to be a close associate of losing BJP candidate Jagdish Pradhan) was spewing on Feb 25 when the neighbourhood was under attack,” laments Saleem, holding up a Facebook post by Sharma.

In the Feb 25 post, Sharma asked, “Is there anything else that you need?” 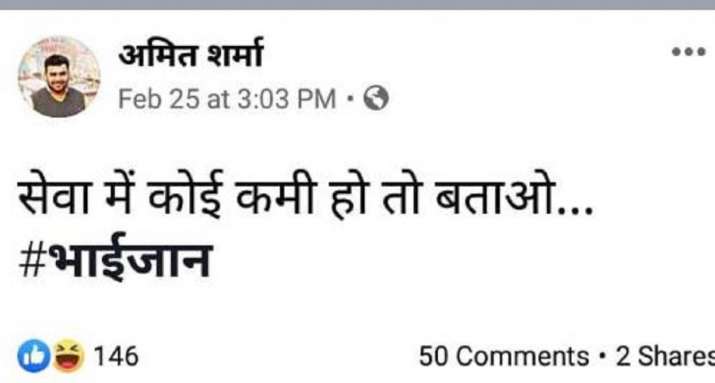 AAP sources have told India TV that Kejriwal’s decision to wash hands off Tahir Hussain was guided by political compulsions. “No political party would like to go on the backfoot because of one individual,” a local leader said, wishing not to be quoted.

“But I am sure that the leadership will reinstate him in the party once he gets his name cleared,” he expressed hope.

AAP sources have refuted the perception that the locals in the neighbourhood, many of them Muslims, were drifting away from AAP in the wake of Kejriwal’s so-called “silence” last week’s violence.

“All the major party leaders have visited the area, be it Kejriwal, Manish Sisodia or Sanjay Singh. Our MLA Haji Younus was personally taking SOS calls all night during the three days that violence was at its peak. We very much know what’s happening here,” the leader said.