But with new developments taking place every now and then, it seems that twists and turns have become the shadow of US election results. Earlier in the day, we saw Democratic rival Biden taking lead in Pennsylvania and Georgia, two states where Trump had maintained the lead ever since polls closed. With lead in these two states, Biden is now touching the 270 mark, and if he wins, he has all the right to claim presidency.

However, hours after Biden took lead in Georgia and Pennsylvania, the former state announced that it will recount all razor-thin votes, further pushing the end of US elections.

Meanwhile, Donald Trump, has not accepted that he has lost the election, which seems pretty evident going by the current trends. The President has alleged election fraud and had been raising his voice to stop the counting of illelegal votes. By illelegal votes, the President means all the mail-in ballot votes that landed the counting centre in key battleground states after the polls were closed.

Trump has said, "I easily WIN the Presidency of the United States with LEGAL VOTES CAST. The OBSERVERS were not allowed, in any way, shape, or form, to do their job and therefore, votes accepted during this period must be determined to be ILLEGAL VOTES. US Supreme Court should decide!"

The counting of votes is still underway with a handful of states remaining in play in the tightly contested US presidential race. The outcome of contests in Georgia, North Carolina, Pennsylvania, and Nevada will determine whether Democrat Joe Biden or President Donald Trump wins.

According to a report in The Associated Press, Biden had a clear advantage over Trump, but the president still retained a narrow path to the 270 electoral votes needed to win reelection. It said that the process could take several more days for the vote count to conclude and a clear winner to emerge.

In Georgia, the outstanding ballots were left to be counted in counties where Biden has performed well. Notably, Trump had on Wednesday prematurely claimed he carried Georgia. Another state where counting could take place for several more days is Nevada. The AP report said that Democrat Joe Biden is leading by less than 1 percentage point over Donald Trump. Nevada was once a swing state. It trended toward Democrats in the past decade. Trump narrowly lost Nevada in 2016. Bush was the last Republican to win there, in 2004. 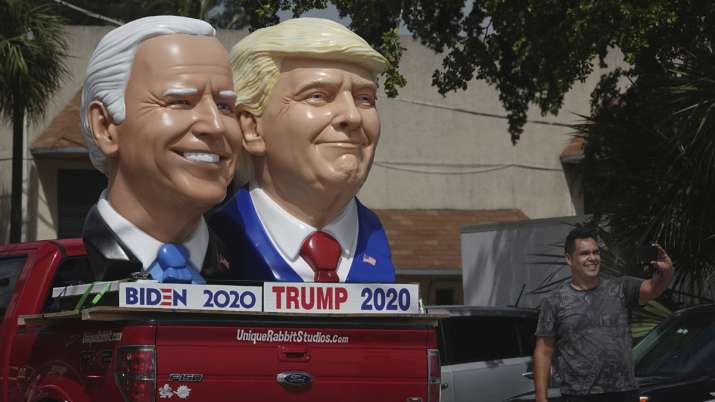 In North Carolina as well, it is early to call as ballots are left to count. In Pennsylvania, hundreds of thousands of votes left to be counted. Pennsylvania is among a handful of battleground states Trump and Biden are narrowly contesting.

Trump, who held a 675,000-vote lead early Wednesday, prematurely declared victory in the state. “We’re winning Pennsylvania by a tremendous amount. We’re up 690,000 votes in Pennsylvania. These aren’t even close. It’s not like, ‘Oh, it’s close,’” Trump said during an appearance at the White House. By Thursday evening, his lead had slipped to about 53,000 votes — and the race is expected to get tighter.

Democrats had long considered Pennsylvania a part of their “blue wall” — a trifecta that also includes Wisconsin and Michigan — that for years had served as a bulwark in presidential elections. In 2016, Trump won each by less than a percentage point.

The AP report said that there is also a possibility the race won’t be decided for days. If there is less than a half percentage point difference between Biden and Trump’s vote total, state law dictates that a recount must be held.

Notably, the US does not have a national election commission that conducts elections and announces the winner. The states have their laws and organisations with resources at scale on the ground coordinate with state officials to plot the dots.