In Pics: Celebration across America as Joe Biden elected US President

News that media organizations were declaring Biden the winner spread instantaneously through Republican President Donald Trump’s longtime hometown. People who didn’t immediately see an alert on their phone or TV learned the news from the yells coming from the streets and neighbors’ windows.

Horns blared. People cheered, danced, set off firecrackers and banged on pot lids. Some even jumped into a fountain as many parts of New York City burst into celebration at Democrat Joe Biden’s victory in the presidential race.

News that media organizations were declaring Biden the winner spread instantaneously through Republican President Donald Trump’s longtime hometown. People who didn’t immediately see an alert on their phone or TV learned the news from the yells coming from the streets and neighbors’ windows. 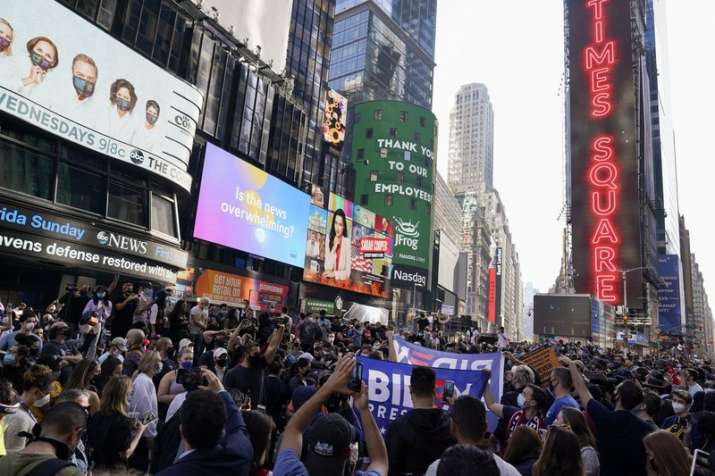 Throngs cheered on the sidewalk outside Trump Tower, the president’s longtime Manhattan home, and people gathered by the hundreds in public plazas that have served as convening spots for Black Lives Matter protests.

Many spoke of feeling intense relief. Kyle Boyd, of Brooklyn, said he heard the commotion and instinctively grabbed the cowbell he had banged during nightly celebrations for health care workers throughout the coronavirus pandemic. 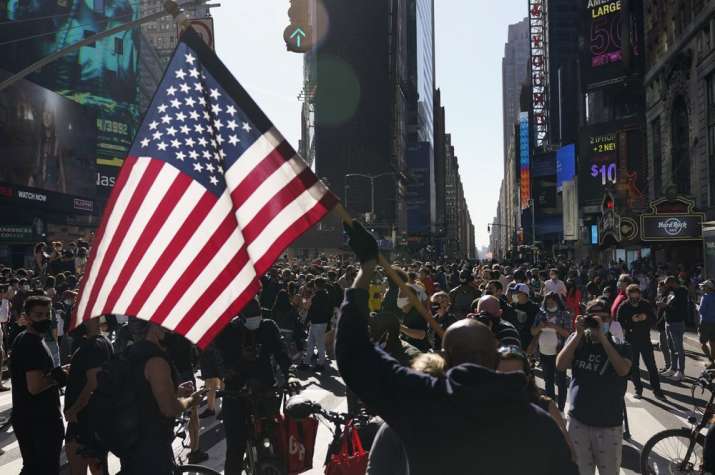 “I hadn’t quite imagined it,” Boyd said over the shouting of revelers as a man hoisted a bottle of Champagne nearby. “I had no idea when it would come.”

On an East Harlem street corner, Jose Diaz was selling T-shirts with an image of Trump and the message “game over!” 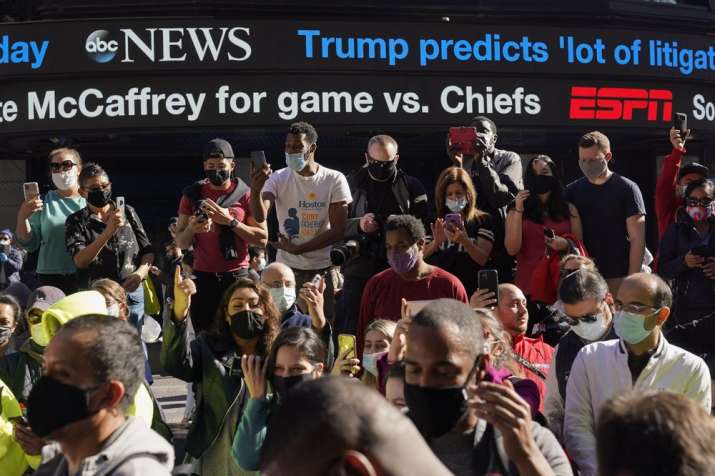 “The game is over. Now people can get back to normalcy,” said the union ironworker, who was born in Puerto Rico and raised in Manhattan. “This is America. Everyone has the right to vote. He can’t change the rules of the game for himself.” 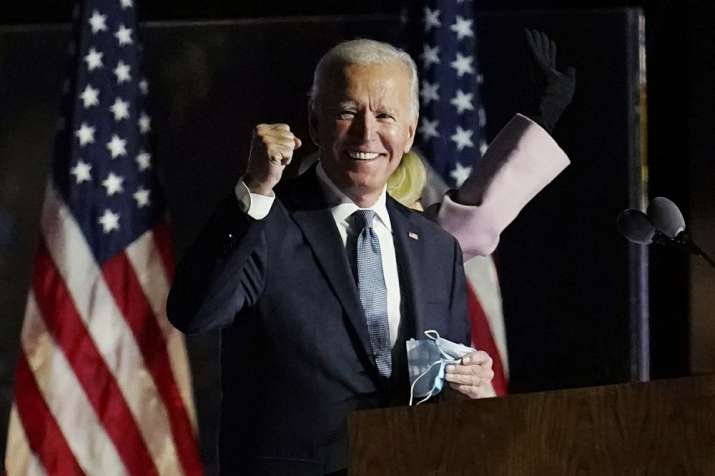 Republicans are outnumbered nearly 7-to-1 by Democrats in New York. But Trump, who refused Saturday to concede, does have supporters in his native city, his home for most of his life before he changed his residency to Florida last year. 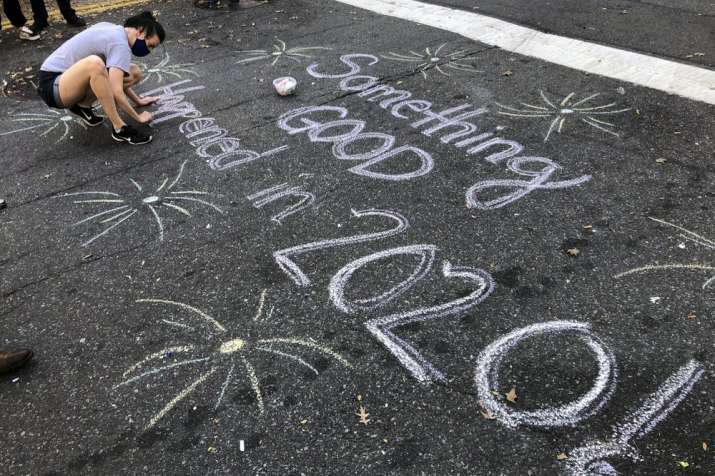 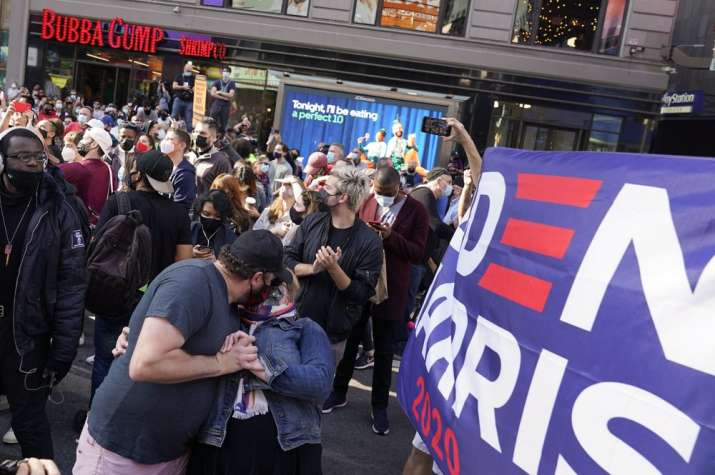 Hirschfeld said Saturday he’s concerned about the accuracy of vote tallies, with Biden carrying some states by narrow margins.

“One has to be concerned when it’s this close, in any election,” Hirschfeld said. But he said he admired Biden, as well. 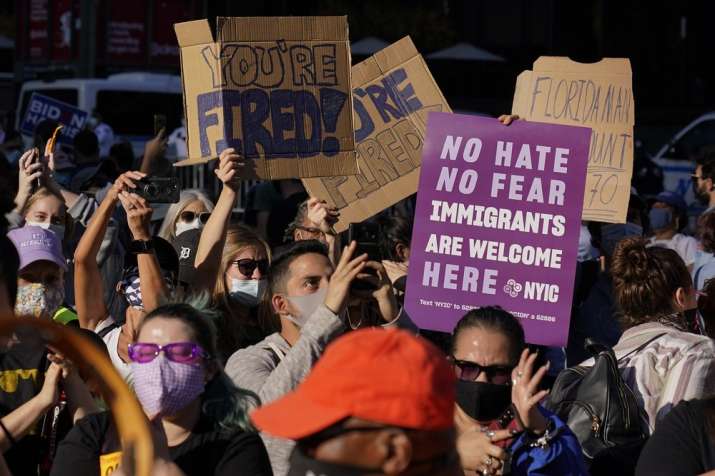 Trump made criticizing New York something of a refrain during the campaign, portraying the city in debates, tweets and other remarks as a “ghost town” that has “gone to hell” under Democratic leadership. His administration has threatened to cut federal funding for New York and some other cities, saying they allow “anarchy, violence and destruction.” 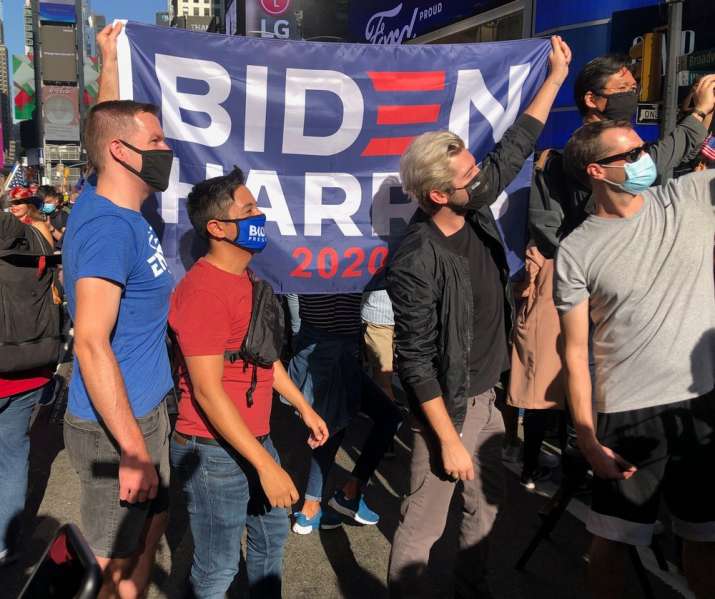 For many, the election call offered a long-awaited occasion for public jubilation in a grim year in the nation’s biggest city, which saw the deadliest coronavirus spike in the country this spring, losing over 24,000 residents to date, according to city statistics.

After months when parades, festivals and countless other communal celebrations have been canceled — though New Yorkers did gather to protest racial injustice and other matters — many let loose with good cheer Saturday. 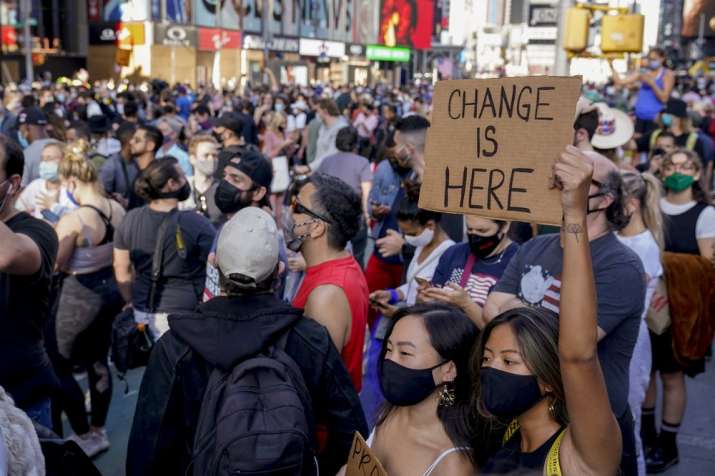 In Manhattan’s Washington Square Park, people waded into a fountain on an usually warm fall day.

In Harlem, chants of “Black lives matter” mixed with cheers, claps and horn-honking as a multiracial crowd celebrated on a plaza on the neighborhood main drag of 125th Street. Some danced to R&B classics and, later, sang “Lift Every Voice and Sing,” the hymn also known as the Black national anthem. 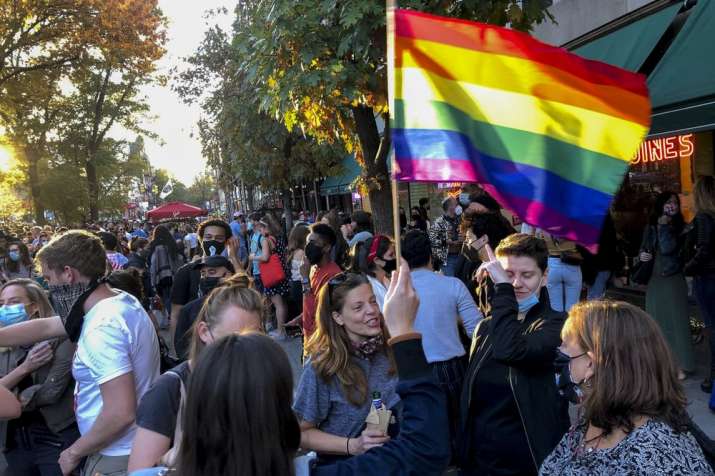 Terence Blake, who goes by the name “Born Life,” works at a Harlem school and said he’d waited two to three hours to vote at his precinct in Brooklyn.

“If Biden does what he says he’s going to do, we’re going to be a great country,” the 53-year-old said as he watched.