Prime Minister Narendra Modi offers prayers while attending the foundation stone laying ceremony for the construction of the Ram Mandir, in Ayodhya.

India TV News Desk
New Delhi Updated on: August 05, 2020 14:19 IST
Indian-Americans across the US celebrated the foundation stone laying ceremony of the historic Ram Temple in the holy city of Ayodhya by lighting diyas and taking around a tableau truck displaying digital images of the Ram Temple around the US Capitol Hill. The groundbreaking ceremony for the construction of the temple took place on Wednesday in Ayodhya with Prime Minister Narendra Modi performing the ‘bhoomi pujan’ of the temple, bringing to fruition the BJP’s ‘mandir’ movement that defined its politics for three decades and took it to the heights of power.
In the US, various Hindu community groups would be organising virtual events to mark the importance of the occasion. In Washington, members from the Vishwa Hindu Parishad, America took out a tableau truck on Tuesday with the digital image of Ram Temple, and went around the Capitol Hill with chanting of slogans “Jai Shree Ram” and moving around the city later. 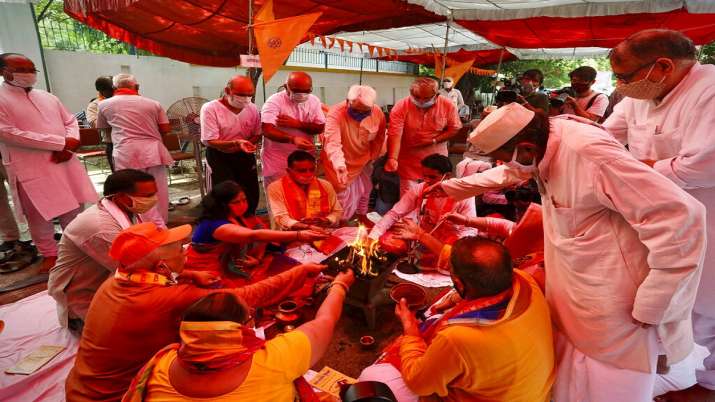 In other parts of the US, Hindu community members lit diyas at home.
“Congratulations to all Indians especially to Hindus, Jains and all who worship Lord Ram on this historic day of the laying the foundation stone for building the Ram Temple in Ayodhya,” Ajay Jain Bhutoria, a California-based community leader, said.
While the public celebrations were limited due to the pandemic, a number of virtual events kicked off in various parts of the country.
A mega event is scheduled at New York's iconic Times Square wherein images of Lord Ram and the proposed temple would be on display on gigantic screens.
“Individuals are celebrating in their homes too by performing pujas, lighting lamps. It will be early diwali for many. The enthusiasm among the Indians here is very high,” a community media release said.
Deepak Sridhar, a software engineer based in Austin, said he will be doing a puja at home at the same time as the ceremony in India. Another Indian-American professional, Manik Advani, said he plans to stay up all night to watch the ceremonies online.
“I plan to watch the ceremonies and also perform puja and seek blessings from the Divine that this will help usher in a new era of peace and wellbeing in the whole world!” said Advani, a senior executive in the Silicon Valley. Both Advani and Bhutoria said spiritual guru Sri Sri Ravi Shankar played an important role in realising this dream for the Hindus.
In a statement, Mayor of the City of Brampton in Canada, Patrick Brown congratulated the Hindu community. “So congrats on that great effort in coming together to build this temple at such an important holy site. And congrats to Sri Sri Ravi Shankar for the efforts to make this happen,” he said. Temples across the country have announced special prayers to mark the occasion.