Coronavirus-free New Zealand finally welcomed 2021 with breathtaking fireworks that were launched from the Sky Tower on New Year's eve in Auckland.

The coronavirus pandemic cast a dark shadow over New Year's eve celebrations on Thursday as night curfew was imposed in several cities, including Delhi, Mumbai and Bengaluru, with many people preferring to stay in their homes on the occasion. However, scattered events with full covid protocols are taking place in the country to mark new year celebrations.

This New Year’s Eve is being celebrated like no other in most of the world, with pandemic restrictions limiting crowds and many people bidding farewell to a year they’d prefer to forget.

New Year's experiences in Asia and the South Pacific varied greatly depending on the country, just like the coronavirus itself. Some major cities canceled or scaled-back their traditional celebrations, while a handful of places without active outbreaks carried on like any other year.

Australia was among the first nations to ring in 2021 because of its proximity to the international date-line. In past years 1 million people crowded Sydney’s harbor to watch fireworks. Instead, most watched on television as authorities urged residents to stay home Thursday and the country's most populous states, New South Wales and Victoria, battled new COVID-19 outbreaks. 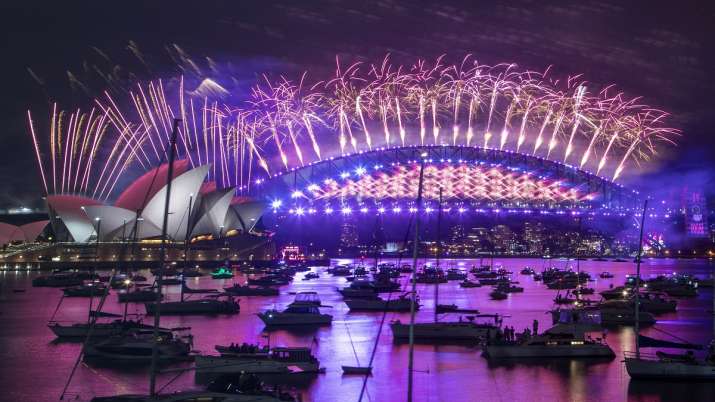 Locations on the harbor were fenced off, popular parks closed and famous night spots eerily deserted. A 9 pm fireworks display was scrapped but the seven minutes of pyrotechnics that lit up the Sydney Harbor Bridge and its surroundings starting at midnight brought momentary cheer. Melbourne, Australia's second-most populated city, called off its annual fireworks show. 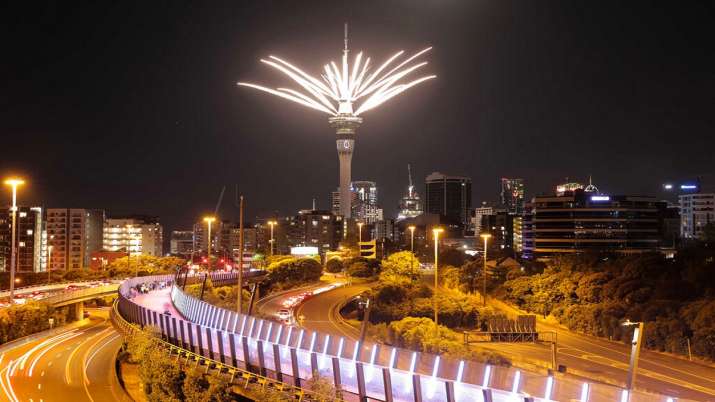 “We did that because we know that it attracts up to 450,000 people into the city for one moment at midnight to enjoy a spectacular display and music,” Mayor Sally Capp said. “We are not doing that this year.”

In South Korea, Seoul's city government canceled its annual New Year’s Eve bell-ringing ceremony in the Jongno neighborhood for the first time since the event was first held in 1953, months after the end of the Korean War. The ceremony normally draws an estimated 100,000 people and is broadcast live.

Authorities in coastal areas of eastern South Korea closed beaches and other spots where hundreds of thousands of people typically gather on New Year’s Day to watch the sunrise.

Cities and countries that have managed to control the coronavirus got to celebrate. New Zealand, which is two hours ahead of Sydney, and several of its South Pacific island neighbors that also have no active COVID-19 cases held their usual New Year’s celebrations. 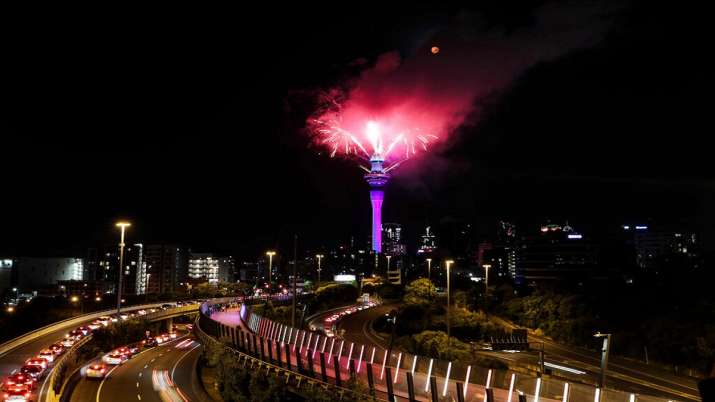 Taiwan hosted its usual New Year’s celebration, a fireworks display by its capital city’s iconic Taipei 101 tower. A flag-raising ceremony in front of the Presidential Office Building on New Year’s morning was planned The island has registered only seven deaths and 700 confirmed cases.

In Chinese societies, the Lunar New Year, which is in 2021 will fall in February, generally takes precedence over the Jan. 1 solar New Year. The coronavirus ensured more muted celebrations of the Western holiday. Beijing scheduled a countdown ceremony with just a few invited guests, while other planned events were canceled.

Much of Japan welcomed 2021 quietly at home, alarmed after Tokyo reported a record daily number of confirmed coronavirus cases. The capital reported about 1,300 Thursday, topping 1,000 for the first tme.

Many people skipped what’s customarily a chance to return to ancestral homes for the holidays, hoping to lessen health risks for extended families.

Train services that usually carry people on shrine visits overnight were canceled. Emperor Naruhito is delivering a video message for the new year, instead of waving to cheering crowds from a balcony outside the palace.

Millions of Indians planned to usher in the new year with subdued celebrations at home because of night curfews, a ban on beach parties and restrictions on movement in major cities and towns after the new, more contagious variant of the coronavirus reached the country.

In New Delhi, Mumbai and Chennai, hotels and bars were ordered to shut at 11 pm. The 3 cities have been the worst hit by the coronavirus pandemic. 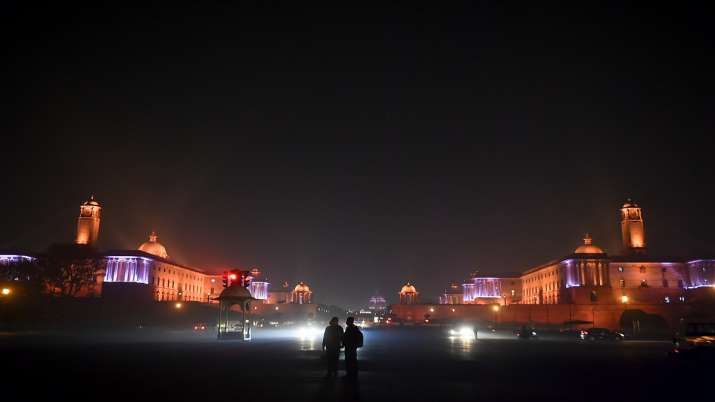 Drones were keeping watch on people’s movements in Mumbai, India’s financial and entertainment capital. Large gatherings were banned, but there were no restrictions on visiting friends, relatives and public places in groups of not more than four people, police said. 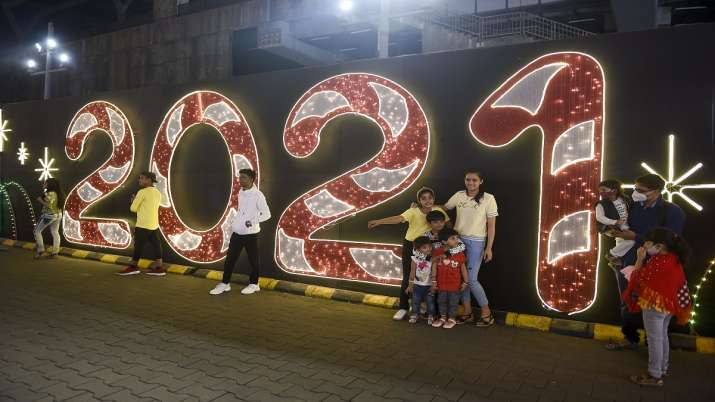 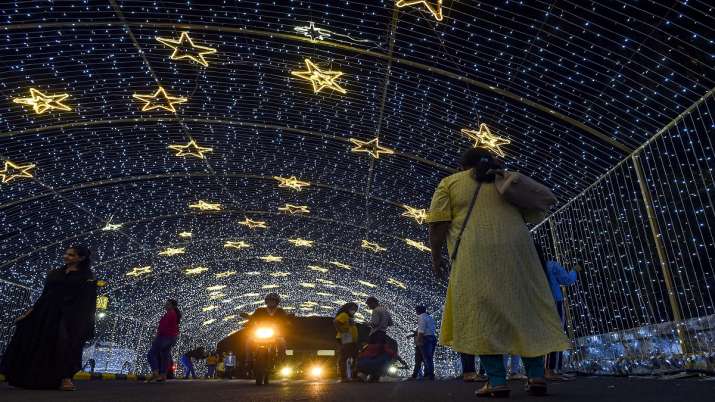 Despite a surge in infections, the Gulf hub of Dubai pressed ahead with its mass New Year’s Eve celebrations, including the annual fireworks show around the Burj Khalifa, the world’s tallest tower.

In many European countries authorities warned they were ready to clamp down on revelers who breach public health rules. In the Czech capital of Prague, a popular New Year's destination for people from across the continent, police prepared to enforce a night-time curfew starting at 9 pm.

Organizers of the annual New Year's Eve show at Berlin's Brandenburg Gate that regularly draws hundreds of thousands of spectators are this year putting on a virtual event for people to watch at home. Public gatherings and fireworks are banned in much of the Germany capital.

Italy’s interior minister has ordered 70,000 law enforcement officers to be on patrol for New Year’s Eve and said this year’s celebrations will be “more sober” than usual. Fireworks will go on as scheduled at midnight over the Colosseum in Rome, but viewing will be from balconies only due to a nationwide 10 p.m. curfew.

A few families gathered in Madrid’s sunny central Puerta de Sol square early on Thursday to listen to the rehearsal of the traditional ringing of the bells that is held at midnight to greet each new year. They followed the Spanish custom of eating 12 grapes with each stroke of the bells before police clear the area.

The British government ran ads imploring the public to “see in the New Year safely at home.” Most of England's population is under lockdown measures in an attempt to slow the spread of the new, easily transmissible coronavirus variant.

London’s annual New Years’ Eve fireworks display, which usually draws thousands of people to the banks of the River Thames, has been canceled. But one tradition will continue: Big Ben's bell is set to sound 12 bongs at midnight to herald the end of 2020.

ALSO READ | 'Probably we will have a very happy New Year': DCGI hints ahead of COVID-19 vaccine emergency-use meet