Israel vows to keep hitting militants as 18 killed in Gaza

The latest fighting brought life in much of Israel to a standstill. Schools remained closed in Israeli communities near the Gaza border and restrictions on public gatherings continued as rockets rained down.

Israeli airstrikes killed more Islamic Jihad militants in Gaza on Wednesday as rocket fire toward Israel resumed after a brief overnight lull, raising the death toll in the strip to 18 Palestinians in the heaviest round of fighting in months.

The military said more than 250 rockets have been fired at Israeli communities since the violence erupted following an Israeli airstrike that killed a senior Islamic Jihad commander accused of being the mastermind of recent attacks. Israel stepped up its battle against Iran and its proxies across the region.

The latest fighting brought life in much of Israel to a standstill. Schools remained closed in Israeli communities near the Gaza border and restrictions on public gatherings continued as rockets rained down. 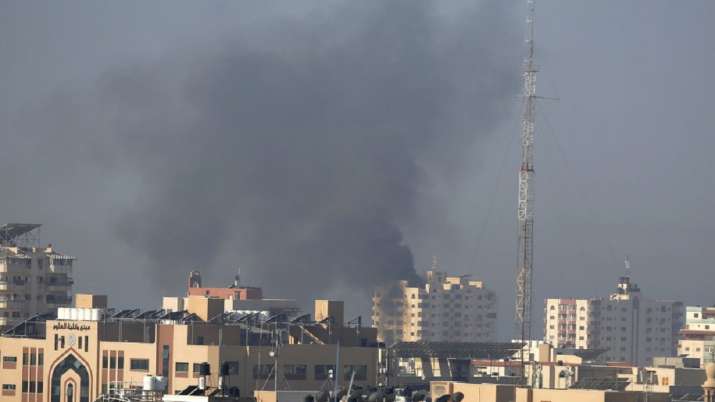 Those attacks came after the early morning strike on Tuesday killed Bahaa Abu el-Atta and his wife as they were sleeping. Rocket fire from Gaza reached as far north as Tel Aviv, and two people were wounded by shrapnel.

Prime Minister Benjamin Netanyahu told a special Cabinet meeting that Israel has no interest in sparking a wider confrontation but warned the Iranian-backed Islamic Jihad that Israel will keep pounding them until the rockets stop.

“They know we will continue to strike them without mercy,” Netanyahu said. “They have one choice: either stop these attacks or absorb more and more blows.”

Gaza’s Hamas rulers have yet to enter the fray — a possible sign the current round of violence could be brief. Although larger and more powerful than Islamic Jihad, Hamas is also more pragmatic. With Gaza’s economy in tatters, it appears to have little desire for more fighting with Israel.

U.N. Mideast envoy Nickolay Mladenov arrived in Cairo from Tel Aviv on Wednesday in efforts to deescalate the latest Israel-Gaza violence. He was to meet President Abdel-Fattah el-Sissi, Egyptian officials said, speaking on condition of anonymity under regulations. 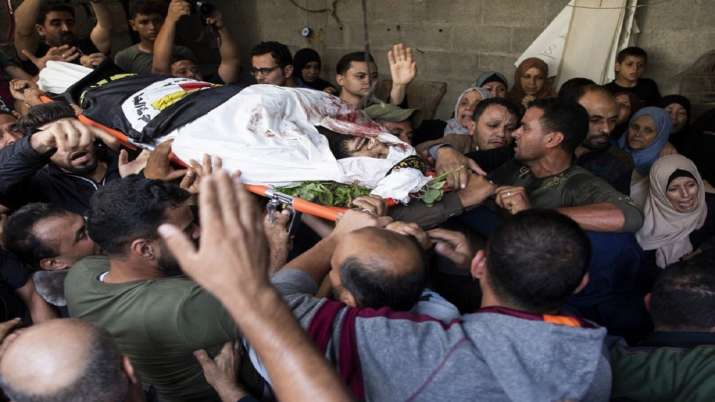 Egypt, which frequently mediates between Israel and Gaza militants, has been working to de-escalate tensions. The Islamic Jihad rejected the efforts, with spokesman Musab al-Berim saying the group’s priority is to “respond to the crime and confront the Israeli aggression.”

Seeking to keep the outburst under control, the Israeli military has restricted its operations to Islamic Jihad, and nearly all the Gaza casualties so far have been members of the militant group.

Israel’s new defense minister said Israel wouldn’t hesitate to carry out additional targeted killings against those who threaten it.

“Whoever plans to harm us during the day, will never be safe to make it through the night,” he said after taking office Tuesday.

Netanyahu appointed him to fortify his hard-line political base as he clings to office after two inconclusive elections. Bennett has long advocated tougher action against Palestinian militants but wasn’t part of the plans to strike Abu el-Atta.

No Israeli deaths have been caused by the rockets attacks, mostly thanks to Israel’s Iron Dome defense system, which the military said intercepted some 90% of the projectiles. A few homes suffered direct strikes, though, and there was a near miss on a major highway, where a rocket crashed down just after a vehicle had passed.

In Gaza, the Islamic Jihad said 38-year-old Khaled Faraj, a brigade commander, was killed early Wednesday along with another militant from the group’s Quds radio network. Four others were killed in an airstrike, including a father and two sons, and two others were targeted later. Their identities were unclear.

Along with Tuesday’s pre-dawn strike in Gaza, another strike attributed to Israel targeted a senior Islamic Jihad commander based in Syria. The strikes appeared to be a new surge in the open warfare between Israel and Iranian proxies in the region.

Iran has forces based in Syria, Israel’s northern neighbor, and supports Hezbollah militants in Lebanon. In Gaza, it supplies Islamic Jihad with cash, weapons and expertise.

Netanyahu has also claimed Iran is using Iraq and far-off Yemen, where Tehran supports Shiite Houthi rebels at war with a Saudi-led coalition backing the government, to plan attacks against Israel. Hamas also receives some support from Iran.

Israel frequently strikes Iranian interests in Syria but Tuesday’s attack in Damascus appeared to be a rare assassination attempt there of a Palestinian militant.

Despite the disruption to daily life, there appeared to be widespread support in Israel for the targeting of Abu el-Atta — a “ticking bomb” who was actively orchestrating new attacks, according to officials. Netanyahu said the military operation was approved by the Cabinet 10 days in advance.

“We showed that we can strike terrorists with minimum damage to innocents,” Netanyahu said. “Anyone who harms us, we will harm them.”

Still, some opposition figures suggested the timing could not be divorced from the political reality in Israel, where Netanyahu leads a caretaker government while his chief challenger, former military chief Benny Gantz, is currently trying to build a coalition government of his own.

Despite their rivalry, both men support a unity government, but each demands that he lead such a government.

Gantz said he’d been briefed on the airstrike in advance, calling it “the right decision.” Netanyahu updated his rival on developments later, according to his office. But a successful military operation could bolster Netanyahu as he seeks to hold onto power — especially if he is indicted on corruption charges.

Israel’s attorney general is to decide in the coming weeks whether to indict Netanyahu. An indictment would increase pressure on him to step aside. Netanyahu has sought to portray himself as one best capable of steering the country through its many security challenges.