Macron, whose poll ratings have fallen sharply in recent months, will be hosting dozens of leaders converging on Paris for the 100th anniversary of the end of the Great War.

A new statue commemorating the role of Indian soldiers in World War I was unveiled in the town of Laventie in France on Sunday to mark Armistice Day when the war ended in 1918.

The seven-foot bronze statue is the first of 57 similar commemorative sculptures planned by the Inter-Faith Shaheedi Commemoration Association (IFSC) to be unveiled near cemeteries around France where soldiers who fought for the British Indian Army were buried.

British Prime Minister Theresa May and French President Emmanuel Macron are to commemorate their countries' shared sacrifice in the First World War on Friday, while also discussing the more thorny issue of their post-Brexit relationship.

Macron, whose poll ratings have fallen sharply in recent months, will be hosting dozens of leaders converging on Paris for the 100th anniversary of the end of the Great War.

US President Donald Trump arrives on Friday night and will hold talks with Macron before a lunch with their spouses at the Elysee Palace.

The site in Laventie was chosen after the remains of two soldiers were identified as belonging to the 39th Royal Garhwal Rifles and reburied with military honours last year. 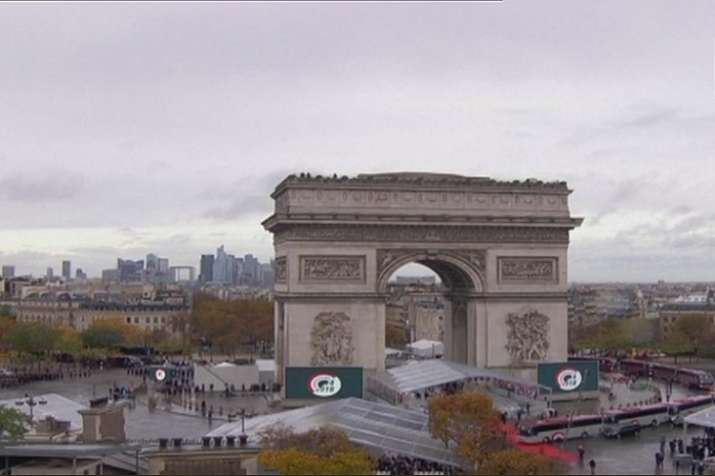 "This marks the commencement of our project to establish 57 such statues near all cemeteries where our Indian soldiers lie buried in France," said Col (retd) Deepak Dahiya, who served for 23 years in the Indian Army and is now based in Paris to facilitate the IFSC project as its vice-president.

The statue was unveiled at a spot allocated by the Mayor of Laventie, Jean-Philippe Boonaert, adjacent to a 12th century church, St Vaast, in the French town.

The unveiling on Sunday sets the ball rolling for a series of events planned by IFSC to honour the memory of thousands of Indian soldiers, who largely went undocumented as the forces sent from the subcontinent at the time tended to be British Empire soldiers or soldiers of Indian princely states.

"The First World War is a relatively unnoticed event in an otherwise historic timeline of Indian events. This colossal effort in the most difficult circumstance is not entirely forgotten nor actively remembered and needs to be portrayed in the correct perspective globally and in India," said IFSC president Ramesh Chander Vohra.

IFSC has also commenced work to establish a 12-tonne brass statue adjacent to the Indian war memorial at Neuve Chapelle in Richebourg, France.

The memorial commemorates over 4,700 soldiers and labourers from British India who lost their lives on the Western Front during World War I and have no known graves. A spot has been allocated by the local French authorities for this large sculpture, which is also expected to be unveiled in 2019.

A series of commemorative events have been taking place across UK and Europe in recent weeks to mark the contribution of Indian soldiers in the war effort, alongside millions of others from around the world. This included a special event at Westminster Abbey in London earlier this week attended by Prince Harry, who witnessed a wreath of marigolds shaped in the symbol 'Om' laid in honour of Indian soldiers.

Vice President M Venkaiah Naidu Saturday inaugurated the first India-bulit war memorial in northern France to pay tribute to thousands of Indian soldiers who fought selflessly and made supreme sacrifices during the World War I.

Naidu, who is on a three-day visit to Paris starting Friday, also interacted with French armed forces veterans and children at the inauguration of the Indian War Memorial at Villers Guislain.

Prime Minister Narendra Modi on Sunday paid heartfelt tribute to the Indian soldiers who fought in the World War I. He also reiterated India's commitment towards world peace and pledged to create an atmosphere where wars do not occur.

Taking to Twitter on the 100th anniversary of the World War I, PM Modi wrote; "Today, as we mark 100 since the end of the horrific first World War, we reiterate our commitment towards world peace and pledge to work to further an atmosphere of harmony and brotherhood so that the trail of death and destruction caused by wars does not occur".

"The Duke of Sussex (Harry) was extremely gracious as he admired our marigold tribute at the 'Indian Army pre-1947 Memorial Plot' at the Abbey," said Satya Minhas, co-chair of Hindu Council UK.

A special event organised by the South Asia Centre of the London School of Economics (LSE) celebrated the launch of the commemorative Khadi poppy to mark the centenary of the end of the war on November 11, 1918, or Armistice Day.

"The hand-woven fabric synonymous with India's independence movement is a highly appropriate gesture to recognise the outsized contribution of Indian soldiers," said Lord Jitesh Gadhia, the Indian-origin peer behind the initiative alongside the Royal British Legion's annual Poppy Appeal fundraising drive in aid of war veterans held in the lead up to Armistice Day.

Nearly 2 million Indian servicemen, workers and labourers travelled West for World War I as they helped secure victory for the Allied Forces - Britain, France, Russia, Italy and the US.

( With inputs from PTI )