An explosion struck an Ariana Grande concert in northern England late Monday, killing at least 22 people and injuring 59 in what police say they are treating as a terrorist attack

An explosion struck an Ariana Grande concert in northern England late Monday, killing at least 22 people and injuring dozens in what police say they are treating as a terrorist attack.

The Islamic State claimed responsibility of the attack and said that “a soldier of the caliphate planted bombs in the middle of Crusaders gatherings” then detonated them.

Greater Manchester Police announced today that they had arrested a 23-year-old man in the south of the city in connection with the attack.

Ian Hopkins, the chief constable of Greater Manchester police, said 22 people, including children, were killed in the explosion and 59 were injured.

He added that the attacker who detonated the improvised explosive device (IED) was acting alone, but an investigation is being conducted to establish if he was part of a broader network.

Emergency vehicles were helping the injured and bomb disposal units were later seen outside the venue.

There was mass panic after the explosion at the end of the concert, which was part of Grande’s The Dangerous Woman Tour. The singer was not injured, according to a representative. 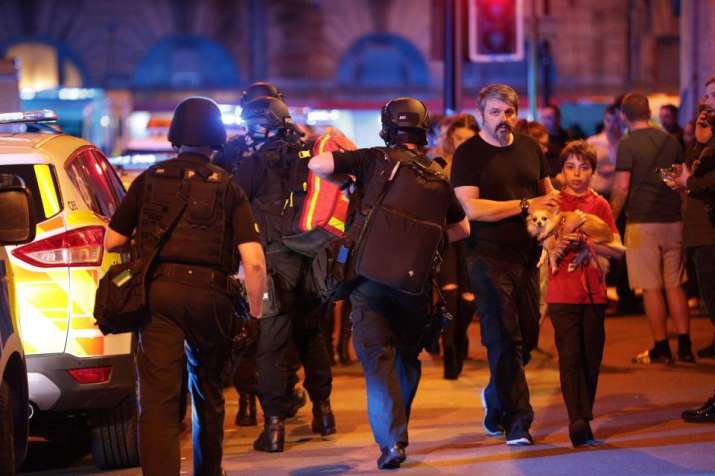 According to some media reports, Islaimc State Jihadis, an arm of ISIS, has claimed responsibility for the attack. However, there is no official confirmation yet.

“It seems that bombs of the British airforce over children of Mosul and Raqqa has just came back to #Manchester,” one user named Abdul Haqq said on Twitter, in reference to the Iraqi and Syrian cities held by the militants where a US-led coalition is conducting air strikes.

News agency ANI has quoted unconfirmed reports as saying that an unknown Twitter account of a possible Islamic State sympathizer sported a tweet about the Manchester Arena in England, hours before the explosion rocked pop star Ariana Grande's concert.

"#Islamic State #manchesterarena #UK #British ARE YOU FORGET OUR THREAT? THIS IS THE JUST TERROR (sic)" read the tweet @ owys663.

Theresa May, the Prime Minister, suspended her General Election campaign in the wake of the apparent terror attack and there will be an emergency Cobra meeting at 9am this morning.

The attack is the worst to hit Britain since the July 7 2005 suicide bomb attacks in central London in which 52 people were killed.

American singer Ariana Grande says she is "broken" following a suspected terror attack at her concert in a stadium here. At least 19 persons were killed and 59 injured in the blast, media reports said.

"Broken from the bottom of my heart. I am so sorry. I don't have words," Ariana tweeted on Tuesday.

broken.
from the bottom of my heart, i am so so sorry. i don't have words.

Pained by the attack in Manchester. We strongly condemn it. Our thoughts are with the families of the deceased & prayers with the injured.

Britain’s terrorist threat level has been set at “severe” in recent years indicating an attack is highly likely. Police said the explosion is being judged a terrorist attack unless new information proves otherwise.

Witnesses reported hearing two loud bangs coming from near the arena’s bars at about 10:35 p.m. but there were few further details.

Video from inside the arena showed concertgoers screaming as they made their way out amid a sea of pink balloons. 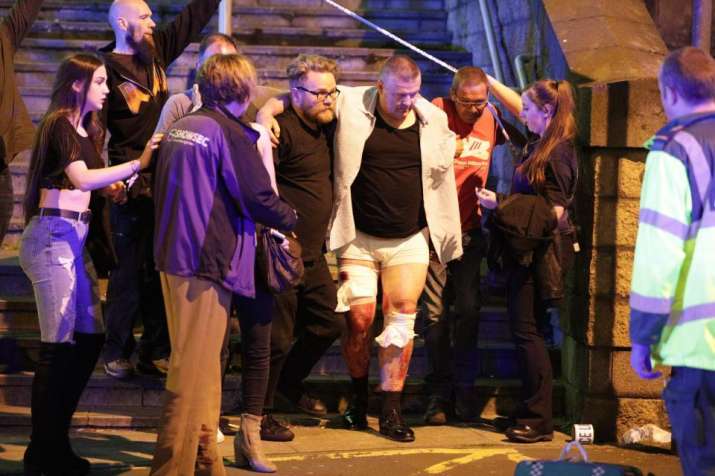 Police advised the public to avoid the area around the Manchester Arena, and the train station near the arena, Victoria Station, was evacuated and all trains canceled.

Some of the concert-goers uploaded videos to the social networks showing people fleeing the area and screaming after the blasts.

Train service was suspended at Manchester's Victoria Station, which is next door to the stadium, and all transport lines were reportedly cut by the authorities after the incident.

Although the explosions sparked screaming and panic among the concert crowd, a spokesman for the singer said she was not hurt.

Manchester Arena, formerly known as the MEN Arena, is the biggest indoor venue in the city with a capacity of around 18,000 for concerts.