A Defence spokesperson said that helicopters and boats were used in relief and rescue operations in Hooghly district, following a request from the state government.

At least seven people have died and nearly 2.5 lakh have been displaced from their homes in six flood-hit districts of West Bengal, a senior state government official said on Monday. Chief Minister Mamata Banerjee directed ministers to keep a tab on the rescue operations and see that relief materials reach all affected people, he said. The Army and the Air Force on Monday undertook rescue and relief operations in Hooghly district, where many areas have been submerged due to excess rainfall and overflowing of rivers.

Around 2.5 lakh people have been rescued and moved to shelter homes as a large number of houses were damaged in six districts of south Bengal, where water released from the Damodar Valley Corporation dams (DVC) and heavy rain late last week have inundated streets and hamlets.

Seven people have died so far but their details are not available yet, the official said. 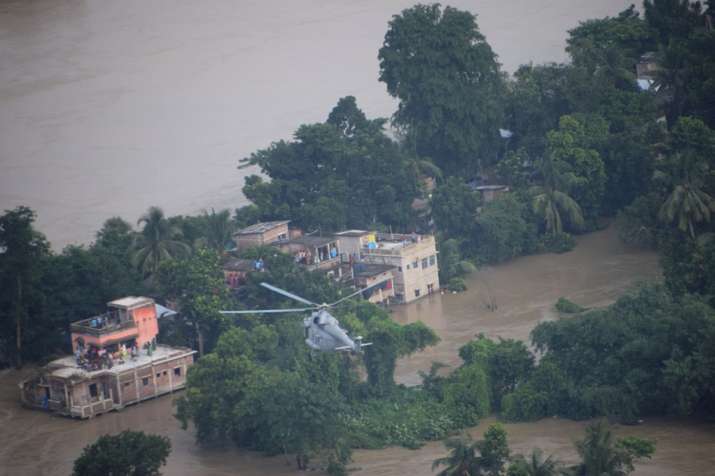 During a Cabinet meeting held at the state secretariat, Banerjee directed ministers to be present at their respective districts and oversee the relief and rescue operations.

Over one lakh tarpaulin, 1,000 MT of rice, thousands of drinking water pouches and clean clothes have been sent to the rescue shelters for those affected, the official stated.

"We have not yet estimated the loss incurred due to the flood. As of now, our sole priority is to rescue the affected," he said.

Panchayat Minister Subrata Mukherjee, who visited the flood-hit areas of Ghatal in Paschim Medinipur district during the day, said he would apprise Banerjee of the situation, and steps would be taken accordingly to tackle the situation.

"I have witnessed several floods in the past, but the situation is terrible this time. The CM had asked me to look into the matter. After conducting this survey, I will report to her," Mukherjee said.

"At least one lakh people have been moved to safety in Hooghly district alone after their houses were damaged. There are several others who are still stranded on the roof of their homes or elevated structures," he said, adding that NDRF personnel are working to rescue them.

A Defence spokesperson said that helicopters and boats were used in relief and rescue operations in Hooghly district, following a request from the state government.

"Helicopters of Indian Air Force rescued 31 people from rooftops and brought them to safety to Arambagh," he said.

One flood-relief column of the Army was deployed at Dhanyaghari in Hooghly, the official said.

Meanwhile, a DVC official said that water was last discharged from its dams on July 31.