Andhra Pradesh: 11 dead, over 1,000 hospitalised after gas leak at chemical plant in Visakhapatnam

Fire tenders, police and ambulances were called on the spot after a thousand people complained of health issues following a chemical gas leak in Visakhapatnam.

At least 11 people, including one child, were dead after a gas leakage was reported from a chemical plant in Andhra Pradesh's Visakhapatnam early on Thursday. More than 1,000 others were taken to the hospital after they complained of health issues following the gas leak, reported at the LG Polymers industry in RR Venkatapuram village, Visakhapatnam. The casualties in the case were confirmed by the District Medical and Health Officer (DMHO). People in the vicinity were taken to a hospital after they complained of burning sensation in eyes, along with some breathing difficulties.

The GVMC said its officials are trying to reduce the impact of the gas leak by spraying water and public address systems are being used to ask people to use masks.

Meanwhile, the Greater Visakhapatnam Municipal Corporation has asked people to stay near the chemical plant where a gas leak took place in the wee hours to stay indoors and use a wet cloth to cover their nose and mouth.

"There is (a) gas leakage identified at LG Polymers in Gopalpatnam. Requesting citizens around these locations not to come out of houses for the sake of safety precautions," the GVMC said in a tweet.

"Please use a wet cloth as a mask to cover your nose and mouth," it added. 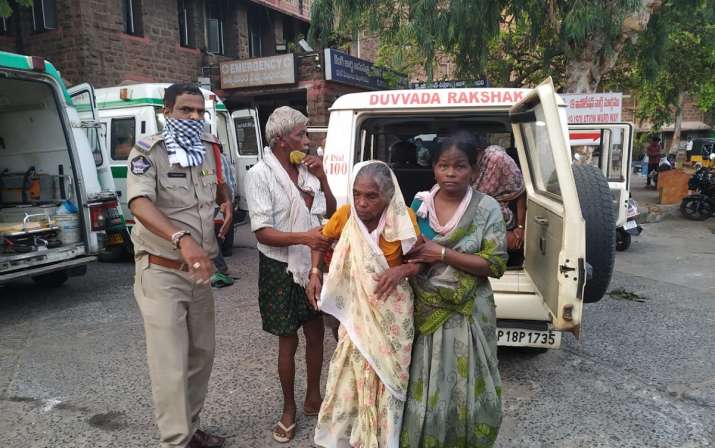 Fire tenders, police and ambulances were called on the spot after a thousand people complained of a chemical gas leak. As per reports, the leakage happened around 3 am near the Naiduthota area close to Gopalapatnam.

The incident led to panic among locals in the 3 km-radius areas. Many were seen lying unconscious on roads with breathing difficulties.

People also complained of rashes on their body and soar eyes. Soon after the matter came to light, local police rushed to the area and launched an evacuation of the locals.

The exact cause of the incident is yet to be identified.

Commenting on the incident, Vizag district collector V Vinay Chand said people who were facing breathing problems are being provided with oxygen support, said the collector.

The NDRF and SDRF teams have been deployed in the area and rescue operation is underway.

Chief Minister YS Jagan Mohan Reddy has asked district officials to take every possible step to save lives and bring the situation under control.