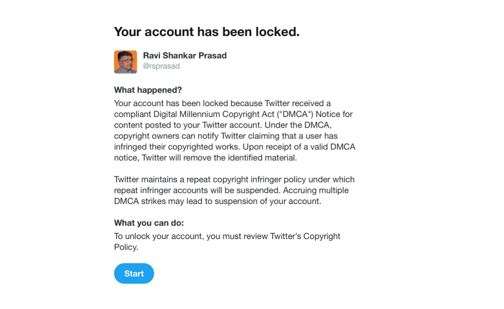 Twitter has neither given any prior intimation before blocking access to account nor specified any content that was found violating the US laws on copyright. Rule 4 (8) of the newly notified Information Technology (Intermediary Guidelines and Digital Media Ethics Code) Rules, 2021 clearly stipulates that whenever a content that does not belong to the user is shared on a social media platform the social media intermediary shall ensure that prior to removing or disabling access, it has provided the user who has shared such a content with a notification explaining the action being taken and the grounds or reasons for such action. The intermediary must provide the user with an adequate and reasonable opportunity to dispute the action being taken by such intermediary. Twitter clearly has not followed this provision of the Rules before locking access to the Twitter account of Ravi Shankar Prasad.

However, it can be clearly seen that Twitter was not very comfortable with the posts criticising Twitter for non-compliance with the IT Rules and hence it threatened the IT Minister by denying access to his account for about an hour for alleged violation of copyright law of the USA. It is also learnt that no TV channel or the anchor who took interviews of the minister ever made any formal or informal complaint to the minister about sharing these clips on Twitter and violating the copyright laws.