Sonbhadra strikes gold: What we know so far of what could be biggest goldmine reserve

Locals in Sonbhadra district of Uttar Pradesh woke up to see their town discussed on television channels as the news of massive gold reserve in the hills of Kaimur and Son Pahadi spread.

Locals in Sonbhadra district of Uttar Pradesh woke up to see their town discussed on television channels as the news of massive gold reserve in the hills of Kaimur and Son Pahadi spread. The base of the news was a report prepared by the Geological Survey of India (GSI) which said that more than 3300 tonnes of gold ore is buried in the region. The news report also said that the government was considering to auction licenses for gold mine in the Sonbhadra district that borders Madhya Pradesh, Chattisgarh, Jharkhand, and Bihar.

It must be noted that India is the world's largest consumer of gold, with imports touching 900 tonnes a year. Prime Minister Narendra Modi government is keen to reduce this import by increasing India's gold production. Fresh impetus has been given to explorations and investigations into the discovery of precious yellow metal. India TV spoke to some locals and experts in Sonbhadra who agreed that the area has a large number of precious metals and if mined, it can well turn into one of India's biggest gold find of the century.

Son Pahadi and Hardi Pahadi - Where gold reserves have been found

At the epicentre of this gold mine discovery in Sonbhadra is a hill called - Son Pahadi (Pahadi means mountain). A rough estimate puts the total gold reserve inside Son Pahari at around 2943 tonnes. There is another block called Haldi Pahadi. Experts from GSI and Uttar Pradesh Directorate of Geology and Mining have put the gold reserve estimate at Haldi block at 646 tonnes. An aerial survey was also completed in the Sonbhadra Pahadi region to establish the findings.

Apart from the gold mine reserve, experts have also found massive potash and andalusite reserve. Andalusite is a rare gemstone and is used for men's jewellery for its earthly colour. Andalusite switches colour two or three times as it is turned. Experts have estimated more than 100 metric tonnes of rare andalusite reserve. Sonbhadra, despite being highly rich in mineral reserve, lies at the bottom of development index in India. The town has often been in news for Naxal-related incidents. But the latest news and GSI report have put the little known town back in the spotlight.

Sonbhadra lies between Vindhyanchal and Kaimur hills, and its topology. The region is also called the energy capital of India because of the presence of many thermal power plants. The district headquarters is the town of Robertsganj.

Sonbhadra not the first time in the spotlight

India TV spoke to many locals and GSI experts who said this is not the first time such a revelation has been made. Back in 1972, there was a GSI report that said that the area has a diamond ore presence. Locals point out to the shining white stones found on the mountain top that reflects light from the mountains. However, the report was then hardly noticed and the place continues to remain untapped. There is another village near to Agrarira hills named - Tamba. Tamba is Hindi for the word copper. Tamba village falls in Madhya Pradesh. There is a vast presence of copper in the region, experts believe but the area is untapped yet. 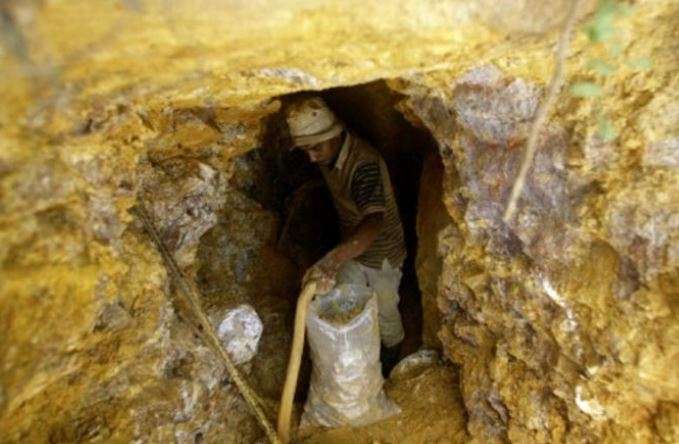 The story goes that locals of Agraria tribe used to mine iron ore. The produce was then transported to Calcutta (Kolkata) in boats on river Son. The Sone (Son) river originates near Amarkantak in Anuppur district of Madhya Pradesh flows north-northwest before turning sharply eastward where it encounters the southwest-northeast-Kaimur Range. The place also finds mention in Chinese traveller Hieun Tsang's account where he mentions that Gautam Budha during his journey to Sarnath had reached Sonbhadra and then crossed the river, Son.  The place also crops up in Hindu epics: Ramayana and Mahabharata.

The region also draws a lot of rock art enthusiasts. Places like Mukhadri, Lekhania, Panchmukhi on Robertsganj-Churk road, Chanain, Lodhi are filled with ancient temples and draws hundreds of rock art enthusiast from across the world. However, that has dropped since the area has become a Naxal-attack prone region.

Locals also say India was once called "Sone ki chidiya" and "Sonbhadra" was its capital.

GSI abd mining experts carry out a helicopter survey of the Son Pahadi in Sonbhadra district. Officials have claimed presence of more than 3600 tonne gold reserve.

The Geological Survey of India and the Uttar Pradesh Directorate of Geology and Mining will submit this report tomorrow. Post the submission of the report, the government is likely to issue tenders to companies for exploration and research related work. If claims come true, then this news throws open the whole new opportunity for the region.

Though this is a long process, it is a beginning that locals think will bring good news to the region and India.

ALSO READ | Sonbhadra Goldmine: What 3000 tons of gold may mean for India