Ahead of the visit, the Congress in a letter to UP Chief Minister Yogi Adityanath sought permission for Rahul Gandhi-led delegation to visit Lakhimpur Kheri saying political leaders from UP and West Bengal were allowed and Congress should be permitted in the same spirit.

Congress leader Rahul Gandhi along with a 5-member party delegation is expected to visit violence-hit Lakhimpur Kheri in Uttar Pradesh on Wednesday (today), however, he has been denied permission by CM Yogi Adityanath government.

It is to be mentioned that Section 144 has been imposed in Lakhimpur Kheri where violence had taken place on Sunday. The former Congress chief is likely to meet families of farmers who died in the incident.

Ahead of the visit, the Congress in a letter to UP Chief Minister Yogi Adityanath sought permission for Rahul Gandhi's visit saying other leaders from UP and West Bengal were allowed.

Congress General Secretary (Organisation) KC Venugopal wrote to UP CM Yogi Adityanath, seeking permission for Rahul Gandhi-led delegation to visit Lakhimpur Kheri on Wednesday saying political leaders from UP and West Bengal were allowed and Congress should be permitted in the same spirit.

However, the Uttar Pradesh government denied permission to Rahul Gandhi-led delegation to visit Lakhimpur Kheri in the wake of Section 144 that has been imposed. 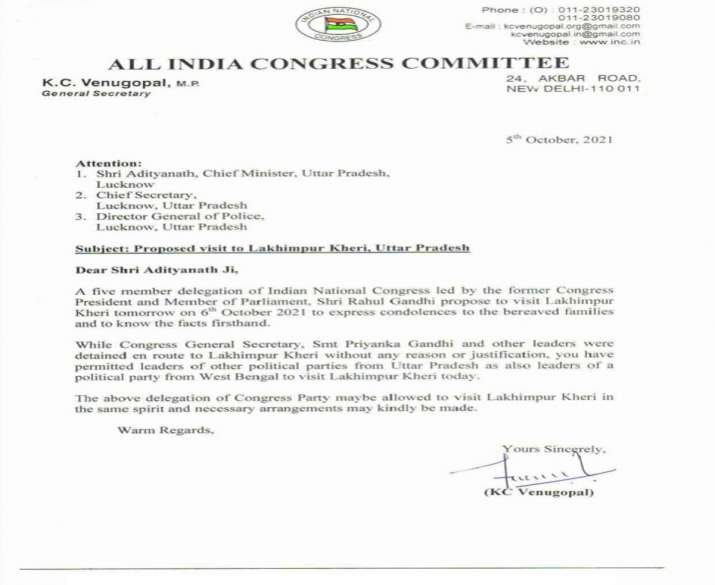 Rahul Gandhi's visit comes at a time when Priyanka Gandhi Vadra, who wanted to visit Lakhimpur Kheri, has already been detained in Sitapur.

Meanwhile, Congress on Tuesday dubbed as "paper-work" the probe into the Lakhimpur Kheri violence and asked why the son of a union minister accused of mowing down farmers has not been arrested yet and the minister dismissed.

Congress leader and former law minister Ashwani Kumar also asked why Prime Minister Narendra Modi did not meet the families of the eight people who died in the Lakhimpur incident even though he was in Lucknow Tuesday for an 'Azadi ka Amrut Mahotsav' event.

Kumar also questioned the detention of leaders like Priyanka Gandhi Vadra who, he said, sought to share the grief of the affected families.

Kumar said human life cannot be measured in monetary terms after the government announced a compensation of Rs 45 lakh each to the affected families. He also dismissed the "compromise" reached between the farmers and authorities.

"We feel only paper-work has been done to try and suppress the anger of people. But this anger cannot be suppressed and history is witness to this," he told reporters.

Meanwhile, the Yogi Adityanath government has set up a Special Investigation Team (SIT) to probe the Lakhimpur-Kheri incident, in which 8 persons were killed on Sunday.

The six-member SIT will be headed by Additional SP Arun Kumar and will include Deputy SP Sandeep Singh and three inspectors.

Violence broke out in Lakhimpur-Kheri on Sunday when some people mowed down protesting farmers with their vehicle, triggering a violent backlash. Nine persons were killed in the incident.