Congress is hoping to mobilise a good crowd after the Lakhimpur Kheri incident where farmers were killed allegedly by the son of a Union Minister.

Congress General Secretary Priyanka Gandhi Vadra on Sunday said the families of deceased farmers in Lakhimpur want justice and not compensation from the government. Addressing the 'Kisan Nyay Rally' at a ground in Varanasi's Rohania area, the parliamentary constituency of Prime Minister Narendra Modi, Priyanka Gandhi today said the government is trying to protect the Union Minister and his son Ashish Mishra, accused in the Lakhimpur Kheri violence incident.

This was the first rally to be organised by Congress in the run-up to the Uttar Pradesh election. The rally was earlier named 'Pratigya Rally'.

"This rally will be organised in Varanasi and the Congress workers of eight districts have been put on work to mobilise people for this," Vishwa Vijay Singh, Vice President of the Uttar Pradesh Congress had said. The districts include Mirzapur, Chandauli, Sonbhadra, Jaunpur, Azamgarh, Mau, and Ballia.

Through this, Congress is hoping to mobilise a good crowd after the Lakhimpur Kheri incident where farmers were killed allegedly by the son of a Union Minister. 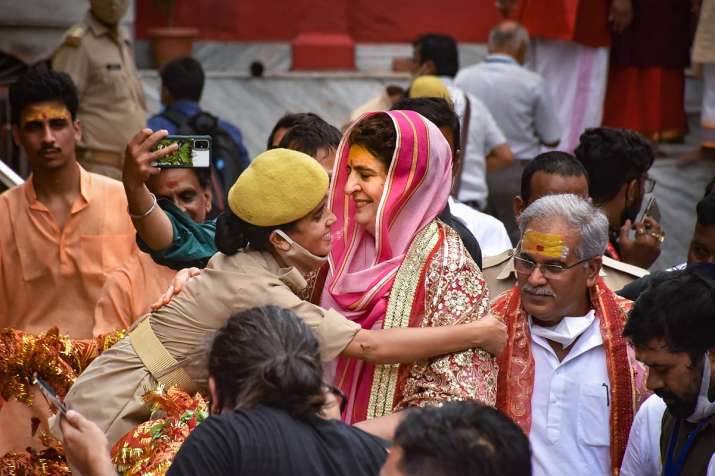 Party MLA Deepak Singh told news agency IANS, "From Varanasi, the Congress will take pledge that they will fulfil all the promises. From here, the message will be taken to each constituency that the party will do whatever they will promise as we have done in Chhattisgarh."

Priyanka Gandhi, who has taken up the farmers' cause in the state, and Congress leaders say that this is high time to reestablish the party in the state as, except the Congress, no other party is taking up the cause of the people and highlighting their sufferings.

Priyanka Gandhi on Thursday demanded a probe by a sitting judge of the Supreme Court or a high court into the Lakhimpur Kheri violence. She also said that Union Minister Ajay Mishra Teni, whose son is among those booked, should resign to ensure an impartial probe.

"In my view and that of the victims' families as well, the case should be probed by a sitting Supreme Court or high court judge, and not the retired judge," Priyanka said.

Also Read: India, China to hold 13th round of talks at Chushul; resolution of friction point to be discussed