GTB Hospital authorities said, postmortem is being conducted and family members would be handed over the bodies after due formalities. Injured persons, many with bullet shot wounds continued to be brought in to hospitals.

With more than 30 fatalities reported in the wake of Northeast Delhi violence, many from the affected areas have come to the fore and have narrated their ordeal. For 20-year-old Mohammad Asif, it was a horrific day, when he was evicted from his house by his landlord. He was then caught by a frenzied mob that thrashed him with iron pipes, leading to major head injury. Asif said he was left vulnerable to the attack after his landlord evicted him in the early hours of Tuesday.

"The mob attacked as I was left to fend for myself in the streets. I am from Uttar Pradesh and as my landlord threw me out, I had nowhere to go," he said.

A traumatised Asif, with bloodstains on his face sat on a stretcher at the GTB Hospital, with bandages wrapped around his head and a leg. And, one of his injured hands was in a sling.

"I have informed my family back home in Shahjehanpur, and they are coming to take me back," he said.

Asif, who worked as in a small coat-making unit and lived in Ghond Chowk in northeast Delhi, he refused to talk to people and just stood in stony silence, grimacing in pain.

GTB Hospital authorities said, a postmortem is being conducted and family members would be handed over the bodies after due formalities. Injured persons, many with a bullet shot wounds continued to be brought in to hospitals. 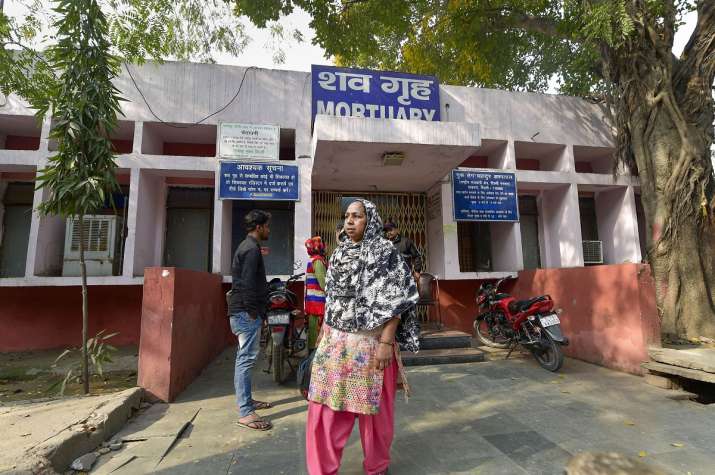 Mohd Yunus, 45, was brought to the GTB Hospital from the Mustafabad area, one of the violence-hit areas.

Sumit Kumar Baghel, 28, recalled how his brother who was returning from somewhere got caught in the mayhem unfolding in the streets.

He sat on a pavement in the premises of the hospital and recounted the horrific tales of violence all around.

"My brother accidentally came in touch with a burning building, and got burnt. Others helped him and then we brought him to the hospital," said Sumit, who himself was nursing an injury in the foot from stone-pelting.

"My brother is admitted here. Our neighbourhood never saw such violence, we celebrate both Eid and Diwali together. What is happening to Delhi," he asked.

Many family members waited outside the mortuary to collect the bodies of their loved ones.

Ashfaq Hussain died at 22 years of age with gunshot injury and his family was in a state of shock.

A person, in his early 20s, who had a drilling rod-like object inserted in his head, was also among the injured brought to the GTB Hospital from affected areas, authorities said.

"The rod has been surgically removed and he's fine now. The patient is conscious," a senior official at GTB Hospital said.

Special arrangements have been made for the victims, designated beds and special provisions in OTs for surgeries, authorities said.