Incessant overnight rains threw parts of Mumbai out of gear on Sunday with the city witnessing severe waterlogging, disruption of local train services and vehicular traffic.

Several people died in house collapses triggered by landslides as incessant overnight rains pounded Mumbai and nearby areas, with the city witnessing severe waterlogging, and disruption of local train services and vehicular traffic. More than 10 people died after a compound wall came crashing down on some houses after a landslide at Bharatnagar Vashi Naka locality in Mumbai's Mahul area. The retaining wall collapsed at 1 am. Two people were injured and taken to nearby Rajawadi hospital from where they have been discharged after preliminary treatment. At least five hutment dwellers were killed as five shanties collapsed after a landslide following incessant overnight rains in Mumbai's Vikhroli suburb at 2.30 am, a civic official said. Two persons were injured and were sent to a nearby hospital, he added.

Incessant overnight rains threw parts of Mumbai out of gear on Sunday with the city witnessing severe waterlogging, disruption of local train services and vehicular traffic. The IMD has issued a red alert for Mumbai in the backdrop of heavy rains, a BMC official said. The suburban train services on both Central Railway and Western Railway in the financial capital were suspended due to waterlogging in the tracks due to the overnight heavy downpour, railway officials said.

8:50 pm: 10 die and one suffers injuries in Vikroli incident

8:30 pm: 21 people dead and 2 injured in the wall collapse incident in Chembur

3:40 pm: A total of seven people died and 1 injured in the incident. The injured has been discharged from the hospital: BMC

3:31 pm: Brihanmumbai Municipal Corporation is a complete failure in disaster management. Why has BMC faltered in saving people's lives? They have to answer. We demand that Thackeray ji initiate an inquiry in the BMC: BJP leader Ashish Shelar in Mumbai

A landslide, triggered by heavy rainfall at Bhuibawada ghat was reported. Due to the falling of huge boulders and debris on the highway is blocked.

Southern Railway resumed passenger train services on the Mangaluru-Mumbai line Sunday morning, after restoring the Kulshekar-Padil section of the track which was blocked after a massive landslip on Friday. Southern Railway Palakkad division officials said the track was certified fit for operation in the morning.

1:45 pm | After wall collapse, 2 women stood on wooden ladder for two hours over fear of electrocution

Two women stood on a wooden ladder in their shanty for over two hours out of the fear of getting electrocuted after a wall near their locality collapsed in Mumbai's Mahul area on Sunday following heavy rains. | READ MORE

Filtration & drainage plants at Bhandup water purification complex have been shut down due to inundation of the complex following heavy rain, disrupting water supply in most parts of Mumbai. Efforts are underway to restore water supply: Greater Mumbai Municipal Corporation 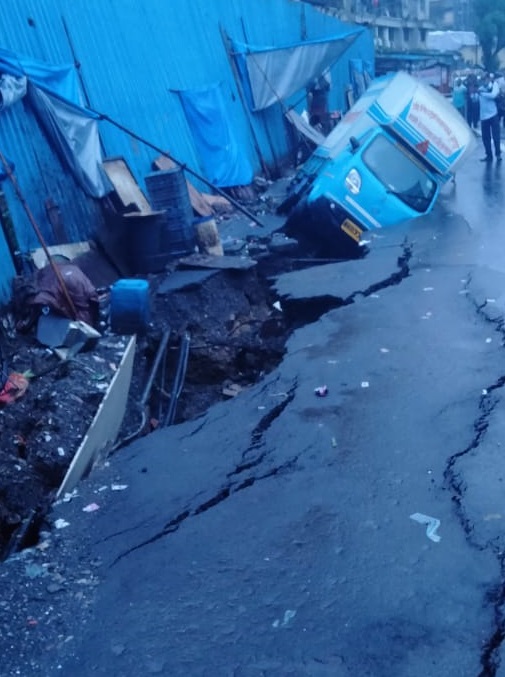 12:01 pm | Aditya Thackeray reaches the site where a wall collapse has claimed the lives of 17 people in Mumbai's Chembur

11:39 am | CM Uddhav Thackeray announces rs 5 lakh ex-gratia to each to kin of deceased & free treatment to injured

Maharashtra CM Uddhav Thackeray has expressed grief over the deaths in accidents at Chembur & Vikhroli due to torrential rains & announced that the government would pay Rs 5 lakh each to the heirs of the deceased & free treatment would be given to the injured, said CMO

10:35 am | Heavy rainfall floods parts of Mumbai; visuals from Nalasopara

10:23 am | 5 bodies recovered, 6 more feared trapped in debris of building in Vikhroli

10:04 am | PM Modi expresses grief over Mumbai collapse incidents, announces Rs 2 lakh ex-gratia to next of kin of deceased

9:29 am | 3 bodies recovered, 6 more feared trapped in the debris of building in Vikhroli area

9:16 am | 12 bodies recovered from the debris in Mumbai's Chembur, 7 more feared trapped

Two bodies have been recovered by NDRF from the debris in Mumbai's Chembur. 10 bodies were recovered by locals before the arrival of NDRF personnel. At least 7 more people are feared trapped, NDRF Inspector Rahul Raghuvansh told ANI

As many as 17 trains short terminated/regulated as 'very heavy rainfall' causes waterlogging on railway tracks at multiple locations in Mumbai and suburban areas. All pumps are working at waterlogged areas: Western Railway

Central Railway said that due to waterlogging in tracks at Dadar, Parel, Matunga, Kurla, Sion, Bhandup and other locations, train services on main line between CSMT and Thane and on Harbour Line suspended.

8:01 am | 11 killed after wall collapse on some shanties in Chembur due to landslide, several feared trapped

"@WesternRly Currently No local train services are running in both UP and DN direction till further notice due to water logging at multiple locations," divisional railway manager of Western Railway's Mumbai division tweeted.

6:28 am | Group of men enjoy dips in the middle of the waterlogged King Circle | VIDEO

6:00 am | Mumbai would receive “heavy to very heavy” rainfall