Anand Giri, the disciple of Akhil Bharatiya Akhara Parishad (ABAP) President Mahant Narendra Giri, and two others have been taken into custody in connection with the latter's death. An FIR has also been filed against Anand Giri and others at Prayagraj's George Town police station. Anand has been booked under Section 306 of the IPC (Abetment of suicide), according to the copy of FIR.

Akhil Bharatiya Akhara Parishad (ABAP) President Mahant Narendra Giri was found dead under mysterious circumstances at Baghambari Math located residence on Monday. A suicide note was recovered in which the name of his disciples, Anand Giri and two others were mentioned.

"We are recording statements. The field unit is collecting forensic evidence. The body will be sent for post mortem tomorrow. We will be taking action based on the findings. No arrest has been made as of now," Prayagraj's Additional Director General (ADG) Prem Prakash said.

"Anand Giri has been taken to Uttar Pradesh by the state police as to it was their matter," Haridwar Sp City Kamlesh Upadhyay said. 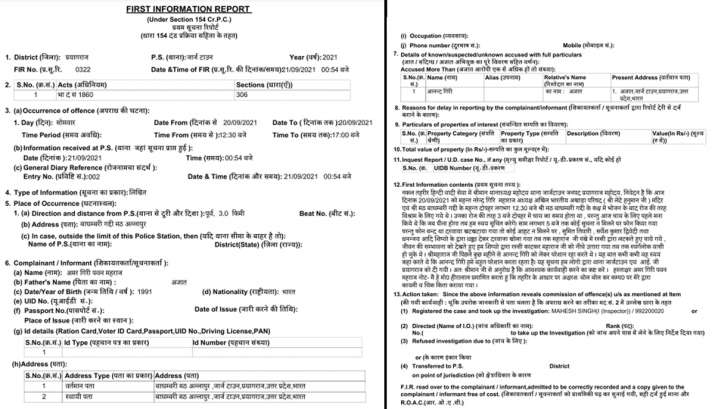 Meanwhile, Anand Giri has termed the allegation as 'conspiracy'. "It is a big conspiracy by people who used to extort money from Guruji and wrote my name in the letter. It needs to be investigated as guru Ji has not written a letter in his life and could not do suicide. His handwriting needs to be probed," he said.

According to a notice issued by the Akhil Bharatiya Akhara Parishad, the mortal remains of Narendra Giri will be kept for darshan by the general public from 11.30 am onwards at the Baghambari Math.