The Chandan Yatra of Lord Jagannath began on Saturday in Puri, Odisha. The yatra marks the beginning of construction of Raths (Chariots) for the annual Rath Yatra scheduled to take place on July 12.

The Chandan Yatra of Lord Jagannath began on Saturday in Puri, Odisha. The yatra marks the beginning of construction of Raths (Chariots) for the annual Rath Yatra scheduled to take place on July 12. However, in view of the second wave of coronavirus, only a limited number of people were allowed today to attend Chandan Yatra.

The Puri district administration has decided to clamp prohibitory order under Section 144 to prevent gathering of devotees around the Narendra tank during the 21-day Chandan Yatra.

In normal times, thousands of devotees attend Chandan Yatra in Puri, but because of pandemic, the entry was restricted.

Though the Chandan Yatra began on Saturday, the Shree Jagannath Temple Administration (SJTA) had restricted devotees entry into the 12th century shrine till May 15, 2021. 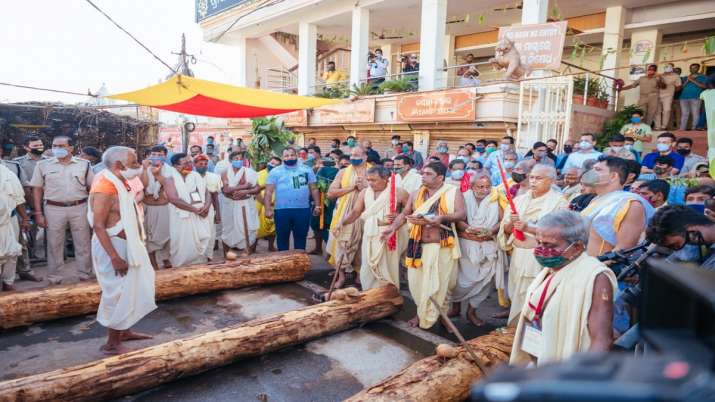 However, the age-old daily rituals of the trinity-Lord Balabhadra, Devi Subhadra, and Lord Jagannath - will continue with help of servitors and temple officials, SJTA chief administrator Krishan Kumar said after chairing a meeting attended by representatives of temple servitors, the Puri district collector and superintendent of police, and other stakeholders.

It was also decided that all preparations for the construction of chariots will continue as per traditions.

The SJTA will take steps for procurement of masks and sanitisers for use during Chandan (sandalwood) Yatra, Snan (bathing) Yatra, and Ratha Yatra. The annual Ratha Yatra falls on July 12 this year.

"The grave challenge posed by COVID-19 was discussed in detail. All were of the unanimous view that necessary steps must be taken to ensure continuity of the Niti-Kanti (rituals) of Mahaprabhu Shree Jagannath," Kumar said.

A decision was also taken to carry out regular screening and testing on families of servitors and temple officials. The rituals related to the Ratha Yatra will begin from Akashya Tritiya (May 15, today).

A COVID-19 Care Centre at Neelachal Yatri Niwas will be strengthened as per requirement, he said. Arrangements will also be made for shifting serious patients to SUM and other hospitals in Bhubaneswar. The temple administrator (development) will act as the Nodal Officer, an official note said.

Focus will be given on the vaccination of those involved in daily rituals at the shrine and those engaged in the construction of chariots for the Ratha Yatra.

The meeting also resolved that the awareness programme will continue on the use of face masks, sanitisation and hand washing, and the need for maintaining social distancing. The temple was initially reopened for the servitors on December 23, 2020, after remaining closed for nine months.