'Kolkata one of primary districts of concern in terms of new Covid cases, deaths': Centre to Bengal govt

Union Health Secretary Rajesh Bhushan has written to Narayan Swaroop Nigam, Bengal Health Secretary regarding new deaths and cases of Covid-19 in the state that have occurred in the last 30 days.

In a letter, Secretary Rajesh Bhusan said, "although there has been a significant decline in the average daily new cases (15,092 average daily cases reported in week ending Oct 22) being recorded at the national level, certain districts in the country have started to show a concerning trend in daily news cases and positivity rate. We all need to maintain a strict watch and take pre-emptive action if required in any such district of concern. 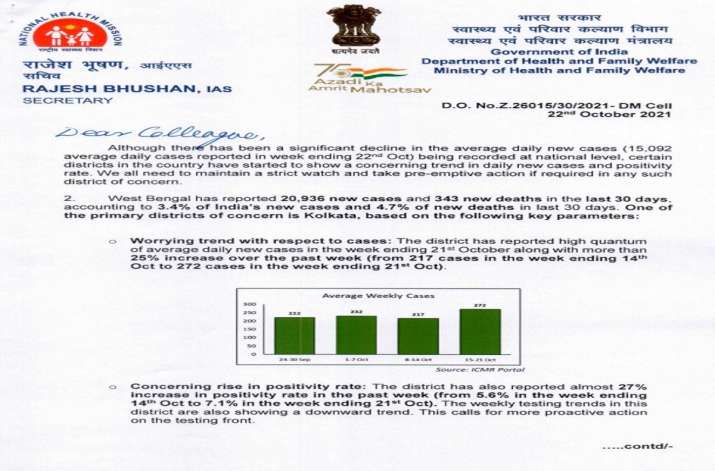 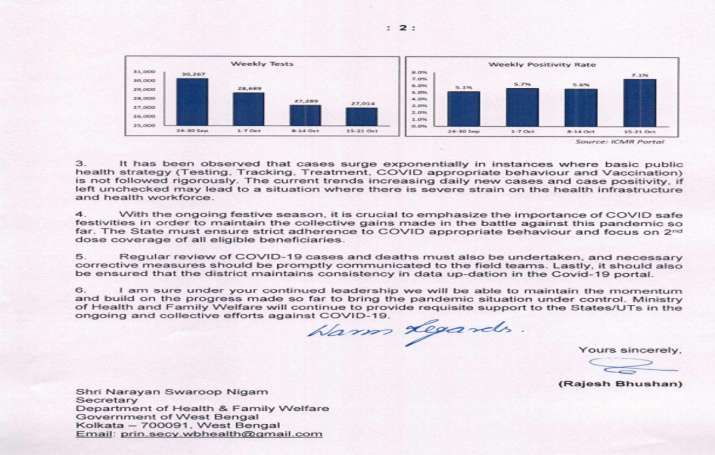 Taking a look at the current Covid situation in Bengal, it seems to be moving in the opposite direction from the rest of India. When the infection rate in other parts of the country is showing signs of slowing down, cases are on the rise in the state.

A small example will help us understand the situation better. Covid beds in most of the premiere private hospitals in the city are either occupied or are nearly full. Belle View Nursing Home - one of the premiere nursing homes in the city has 47 beds of which 23 are already occupied. Before the pujas the number of occupancy was just 10. Similarly, Calcutta Medical Research Institute has all its 38 beds full and Peerless hospital has 40 occupied out of 40 beds. In ILS multi-speciality hospital, 27 Covid beds out of the total 38 are occupied and the administration expects that the rest of the beds will be full soon.

Experts have already warned that West Bengal will see a spike in the coming weeks as Covid-19 norms have been largely flouted during the recent Durga Puja celebrations and the result is on the table. When the daily infection rate in Kolkata before the pujas was hovering around 600, on Saturday it hit 974 - the highest daily infection after July 21 when the statistic was 869.

Not only in Kolkata but the infection rate in the districts is also showing an upward curve. According to an official of the state health department, the positivity rate in Cooch Behar is 8.7 per cent, in East Medinipur it is around 5 per cent, in Nadia it is 4.2 per cent and in Howrah and Hooghly it is hovering around 2 to 2.5 per cent when before the pujas it was just above one per cent.

Considering the rising cases of Covid in the state particularly in areas in and around Kolkata like in districts like Howrah, Hooghly and North and South 24 Parganas the state has already announced micro-containment zones in several areas of Howrah, Hooghly and North 24 Parganas. Chief secretary H.K. Dwivedi held a virtual meeting with all the district magistrates and asked them to keep a strict watch on the Covid cases in districts. They have also been asked to impose 'containment zones' in areas where the rate is high.

"There was all-round laxity during Durga Puja, which is likely to push the situation out of bounds unless we immediately re-impose strict Covid-19 norms within people and increase the rate of testing and vaccination in the state," a senior physician in the state and one of the members of the global advisory committee created by the state government said.