Farmers have been protesting on the different borders of the national capital since November 26 last year against the three newly enacted farm laws.

A large number of farmers from different states on Sunday participated in a ‘Kisan Mahapanchayat’ held in Uttar Pradesh's Muzaffarnagar district in protest against the Centre’s controversial farm laws. The mahapanchayat organised by the Samyukt Kisan Morcha (SKM) was held at the Government Inter College ground in Muzaffarnagar, ahead of the crucial UP assembly polls next year.

He said over 5,000 ‘langars’ (food stalls), including some mobile stalls, have been set up for the participants.

The farmers, including women carrying flags of different organisations and wearing different coloured caps, were seen arriving at the venue in buses, cars and tractors.

Addressing the media, BKU leader Rakesh Tikait today said, "When Govt of India will invite us for talks, we will go. The farmers' agitation will continue until the government fulfills our demands."

"The struggle for Independence continued for 90 years so I have no idea for how long this agitation will run," Tikait said.

Meanwhile, the Muzaffarnagar district administration denied the request of the Rashtriya Lok Dal (RLD) to sprinkle flowers from a helicopter on the venue and participants of the mahapanchayat.

City magistrate Abhishek Singh rejected the request, saying it cannot be allowed due to security reasons.

RLD chief Jayant Chaudhry had earlier sought permission from the district authorities to allow sprinkling of flowers from a helicopter on the mahapanchayat in honour of the agitating farmers.

The district authorities have posted police personnel at the residences of Union minister Sanjiv Balyan and BJP MLA Umesh Malik here, as a precautionary measure.

The SKM on Saturday claimed that thousands of farmers from 15 states had reached Muzaffarnagar to participate in the mahapanchayat'.

The umbrella body of 40 farmer unions spearheading the farmers' agitation against the Centre's three farm laws said the event will prove that the agitation has the support of “all castes, religions, states, classes, small traders and other sections of the society.”

"The mahapanchayat of September 5 will make the Yogi-Modi governments realise the power of farmers, farm labourers, and supporters of the farm movement. The Muzaffarnagar mahapanchayat will be the biggest ever in the last nine months," the SKM had said in a statement.

It had said 100 medical camps had also been set up for the farmers attending the mahapanchayat.

A total of 32 farmer unions from Punjab have given a deadline of September 8 to the state government to withdraw cases against protestors, it said, adding that if the cases are not withdrawn, the farmers will prepare a roadmap for a bigger protest on September 8.

The Yogi Adityanath government made tight security arrangements for the Kisan Mahapanchayat. Commenting on the security, Muzaffarnagar Senior Superintendent of Police (SSP) Abhishek Yadav had earlier said, "We expect a 70,000-strong gathering. To manage such crowds, deployment of forces is a standard operating procedure."

The forces include six companies of Provincial Armed Constabulary (PAC) and two of Rapid Action Force, and 1,200 policemen. Ten companies of paramilitary forces and 4,000 police personnel are also being deployed, sources said.

The SSP said, "Drone cameras will be used for aerial surveillance and 200 CCTV cameras have been installed."

Over 20 LED screens and microphones have been set up in a 4-kilometer radius from the venue, Government Inter College Ground.

Over 500 langars are already operating in Muzaffarnagar and surrounding areas. Another 500 mobile langars, tractors carrying food and drinking water, will ply routes leading up to Muzaffarnagar.

Those coming in for the Mahapanchayat from outside Muzaffarnagar can put up at one of over 20 banquet halls booked by the farmers' body. Nearly 100 medical camps, 50 ambulances and a temporary hospital have also been set up to address any medical emergency.

The district administrations of Shamli, Muzaffarnagar and Baghpat have shut down all liquor shops from Saturday night. The closure will continue till Sunday night.

Farmers have been protesting on the different borders of the national capital since November 26 last year against the three newly enacted farm laws: Farmers' Produce Trade and Commerce (Promotion and Facilitation) Act, 2020; the Farmers Empowerment and Protection) Agreement on Price Assurance and farm Services Act 2020 and the Essential Commodities (Amendment) Act, 2020.

Farmer leaders and the Centre have held several rounds of talks but the impasse remains. 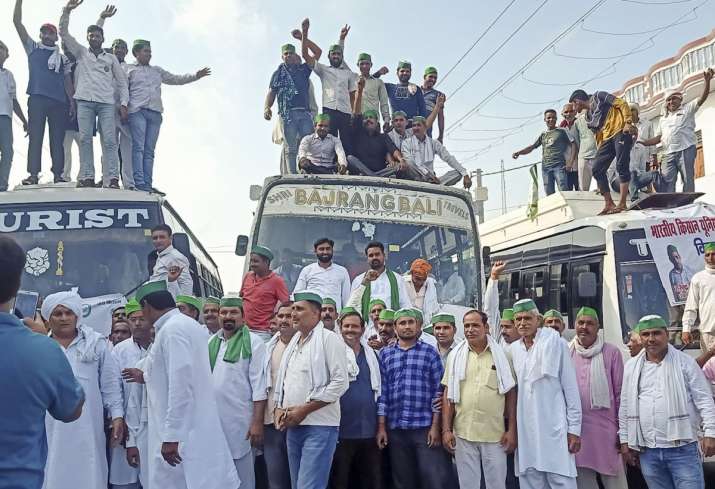 Following a two-day national convention at the Singhu border, the Samyukt Kisan Morcha (SKM) on Saturday has also called for a 'Bharat Bandh' on September 25.

In a statement, the farmers' union spearheading the movement against agriculture laws at the Delhi borders for the past nine months said SKM National Convention at Singhu Border has decided to "Form joint committees of the SKM in all states and districts in India, to ensure a pan-India expansion and intensification of the farmers' struggle."

SKM said that at the convention, it was also decided to make the Muzaffarnagar Kisan Mahapanchayat on September 5 a massive success.

"This will inaugurate 'Mission Uttar Pradesh-Uttarakhand' which will be taken down to the grassroots to ensure the defeat of the BJP regimes in both the states," the statement said.

The national convention of SKM was held on August 26-27 at the Singhu Border near Delhi. Over 2000 delegates from hundreds of organisations from 22 states attended this convention, said the statement.

(With inputs from ANI and PTI)