JNU’s popularity among Indian youth: What do the numbers say?

JNU’s teachers say that the institution remains as popular as ever among the Indian youth, even as the students of India's top liberal arts university boycott examination for the first time in decades

For the first time in decades, students at the Jawaharlal Nehru University (JNU) are boycotting their end semester examinations to protest the university administration’s decision to hike the hostel fees.

While the University registrar has issued a diktat calling for the exams to be wrapped up by Dec 20, imposing a blanket ban on all teachers’ leaves. The Jawaharlal Nehru University Teachers’ Association (JNUTA) has hit out at the university authorities for blaming the teachers for the ongoing stalemate.

“To link sanction of leave to completion of end-semester examinations, and imposing a blanket ban on all leave, has thus no legal basis and is simply an exercise in intimidation,” JNUTA said in a statement.

“Such misuse of the power to sanction leave has been attempted on an earlier occasion, inviting an intervention from the Honourable Delhi High Court,” it added, reacting to the Dec 14 circular from the registrar linking the sanctioning of leave to completion of exams.

The stalemate over the completion of exams is the latest roadblock to the smooth functioning of India’s top liberal arts’ institution, which has consistently found itself on the wrong side of authorities.

While the universities’ teachers and many notable alumni admit that they are at the receiving end of the current government’s policies, they are also confident all the controversies have done little to dent the image of JNU among India’s youngsters.

“There is no evidence to suggest that JNU’s popularity is waning, despite all the efforts by the government,” Surajit Mazumdar, the general secretary of the JNUTA, told India TV.

What do the numbers say?

As per the university records, 1.22 lakh applicants appeared for JNU’s written test in 2015-16, held at 76 centres in 51 cities across the country. The number doesn’t include the students who appeared for the entrance exam for biotechnology. For the university’s sought-after postgraduate courses, 30,790 applications were received that year.

In 2016-17, 1.18 lakh applicants took up the JNU entrance exam. The number of applications received for the postgraduate course stood at 27,511 in the year.

A notable drop in the number of applicants, however, was witnessed in 2017-18, when 79,725 applicants wrote the entrance exam. A total of 24,057 applications were received for the postgraduate course that year.

The teachers squarely blame the new University Grants Commission (UGC) rules that kicked in that year for the sharp drop in the number of applications. “The drop in the number in 2017 was because of the massive seat cut in M.Phil/PhD programmes on the pretext of implementation of UGC 2016 regulations. Several centres did not offer seats for admission that year,” says Mazumdar.

Teachers say that the governments got their priorities wrong in effecting a seat cut and not increasing the university budget, while at the same time almost doubling the security expenses of the university year-on-year basis. Annual accounts show that the spending on security now is almost four times being spent on library bills.

According to university accounts, the administration spent more than Rs 17 crore on security in 2017-18, compared to Rs 9.5 crore it had spent an year earlier. The records show a marginal increase on security expenses in 2018-19, as the university spent Rs 18 crore that year.

As per the latest student enrollment numbers available with India TV, 24,057 applications were received for MPhil/PhD programmed in 2018/19, which is more or less the same to the number of students who wanted to pursue postgraduate studies at JNU in previous years.

Further, teachers point out that almost 50 per cent of JNU’s students come from families with household incomes less than Rs 12,000 a month. “The university, as enshrined in law, is the first choice for meritorious students from poor backgrounds. We award deprivation points to students from underprivileged backgrounds during the admission process,” Ayesha Kidwai, a professor at JNU, says.

Records also show that JNU receives the most number of applications for its full-time courses from aspirants residing in Uttar Pradesh and Bihar. 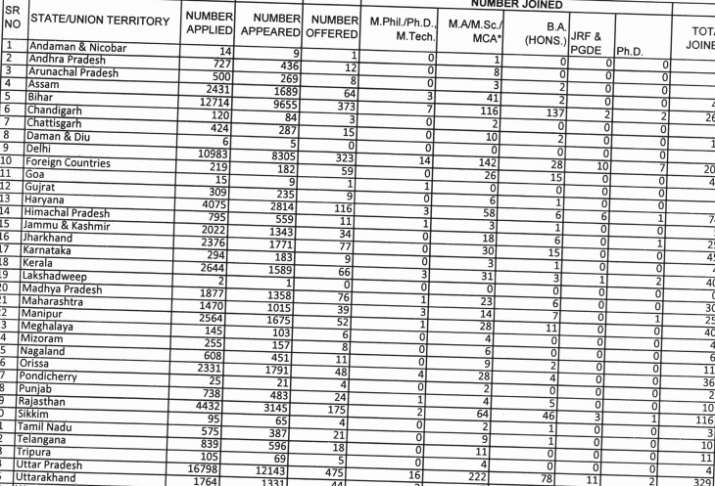