Rule of Law or Rule by Law: Why is India celebrating the Hyderabad 'encounter'?

The four accused in the barbaric gangrape of the Hyderabad doctor were killed in a police encounter on Friday. The question we are asking today is, why is India celebrating these killings? Have we lost faith in our system? Are we inclined towards being ruled by law rather than a country which propels 'rule of law'?

When India woke up in the morning of December 6, few would have seen coming, the news of the killing of the four accused in the brutal gangrape and murder of the 26-year-old Hyderabad doctor in a police encounter. While the majority of the people welcomed this 'encounter' by the Telangana police, others were left astonished by the way the police took the matter into their own hands and became judge, jury and executioner.

The Cyberabad Police Commissioner did a press conference in the afternoon narrating the official line of the Telangana police. As per the commissioner,

The incident happened in the wee hours of Friday when the 4 accused were taken to the crime scene to locate a burried cell phone and other belongings (power bank and watch) of the victim. The police commissioner claimed that the accused had confessed it to the police that they had hidden the objects near the crime scene.

There were 10 policemen (armed) who had accompanied the four accused. Seeing an opportune moment, the four accused got together and tried to escape from the scene. They tried to attack the policemen with sticks and stones, two of the accused also snatched the guns being carried by the policemen and started firing. The police asked the accused to surrender after the latter denied, police then retaliated fire and after an exchange of rounds that lasted 20-30 minutes, the four accused were found dead. Two of them were found dead still holding on to the police weapons. 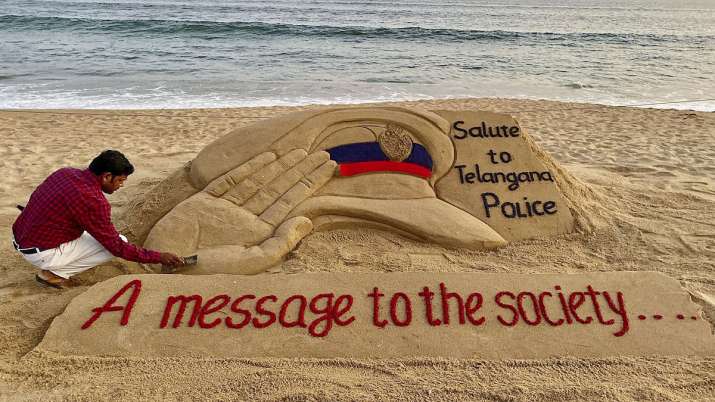 This encounter by the Telangana police brought out an overwhelming response from the masses. Everyone had their opinion on what had gone down in Hyderabad. The police in Hyderabad was cheered and celebrated by the public. Some even showered the cops with flowers on the crime scene. On the other hand, various intellectuals and people holding a position of responsibility were shocked at the police taking law into their own hands. Some termed this as extrajudicial killings while others said that a formal inquiry should be initiated against the cops responsible for this encounter. Social media also erupted into animated debates on the incident.

Why is the encounter under question?

There is a reason India is a country that propels 'rule of law' and not 'rule by law'. The competence of the police force is questioned time and again in such cases. "Where was the police when the accused were raping the girl?" or "Why did the police not file the FIR sooner?" these are some typical questions that get asked of the police department whenever such a heinous crime takes place. But the question is, is this the right way to prove competence? Let's just take two viable possibilities about Friday's encounter.

It is a basic principle followed in all countries following the rule of law including India, that individuals shall be presumed innocent until proven guilty by due process.

There is a reason that these 4 were still called 'accused'. In his press conference, the Cyberabad CP, on several occasions, called them out as A1, A2, A3, A4, which means accused 1, 2, 3, 4. Irrespective of how much emotion is attached to this case, one has to look beyond the emotion and into the facts which are that the four men were not yet proven guilty. The only way they could have been proven guilty is by law. And the law of the country is served and delivered in the courts of this country and not by the police.

So why are we celebrating it? 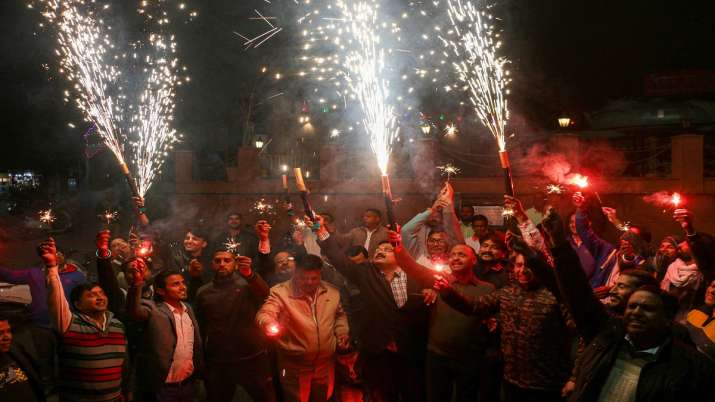 26-year-old was brutally gangraped and murdered by 4 men. The police had 4 accused in custody, the court of law could have perhaps found them guilty and given them a death penalty, the punishment they truly deserved. But now after they have been killed by the police, there is no more proving guilty. On the contrary, the police actions will now be subject to an inquiry.

This case is such that enormous amount of emotions have been attached with the victim. The growing number of gangrapes in the country and the inefficiency of the judicial system which has still not delivered justice to the Nirbhaya case victims, even 7 years after the crime was committed, have left people so frustrated by the judicial system that they have almost lost hope and are happy with this kind of extrajudicial justice, or should we say 'justice with a gun'.

National Commission of Women (NCW) chairperson, Rekha Sharma, who was vocal and proactive in her support to the Hyderabad doctor told news agency ANI on Friday, "we wanted speedy justice, death penalty through legal channels."

"As a common citizen, I am feeling happy that this was the end we all wanted for them. But this end was supposed to be through the legal system. It should have happened through proper channels. We always demanded death penalty for the accused and speedy justice as well, but the accused were killed in an encounter. So, police are the best judge to know what circumstances was the encounter carried out," she added.

The encounter was also condemned by several other people who held positions of responsibility. Former UP DGP Prakash Singh, while speaking to a media outlet said, "It is true that we all wanted a death penalty for the accused but there is a path to justice and then there is this instant justice. It would have been better if this would have been the outcome after a proper judicial procedure. If by any chance any one of them was innocent, will you be able to return back his life? What will happen to his family. This is a very wrong precedent being set."

National Human Rights Commission (NHRC) has taken note of the matter and will do its independent inquiry into the matter. Telangana High Court has also asked the police to preserve the bodies of the four accused until December 9. The High Court also directed that the video of the post-mortem in Compact Disc form or pen-drive be handed over to the Mahabubnagar Principal District Judge, after completion of the post-mortem of all the accused. The court directed the Principal District Judge to hand it over to the Registrar General of the High Court by December 7 evening.

The developments of the last 24 hours make one thing absolutely clear. The common citizen of this country is tired of waiting years and years for justice in crimes that are of the magnitude of the one that took place in Hyderabad, or the Nirbhaya case which took place in Delhi in 2012. If a common man was sure that the law would take its course swiftly and bring the guilty to justice, no one would have celebrated this encounter.

Rule of Law or Rule By Law

So the question at hand is that the action taken by the police, is this the only thing that is left to be done to protect the law? are we so paralysed that we can't take steps to protect our own system? There has to be a conservative effort put in to make sure that the culprits of such crimes get adequately strong punishment and in a time frame which is logical. Family of the victim should not be made to wait 7 long years for justice. Remember, Nirbhaya's family has still not seen the culprits hanged. Having said that, justice by gun is vigilante justice. And that cannot be tolerated.