Ghost Train? Not quite, but THIS one ferries just two passengers every day

What if we told you, only two passengers board this train at a junction that sees footfall of thousands?

India TV News Desk
New Delhi Updated on: January 16, 2020 19:19 IST
When a train arrives at a junction station, we would expect rush of passengers entering the coaches to get that ever elusive vacant seat. But what if a train arrives, takes on just two passengers and quietly continues its journey ahead? Such a thing happens at Balangir Junction in Odisha which normally sees a footfall in thousands.
But every morning at 6, a train arrives at Balangir station, waits for the two passengers and travels on. The train then crosses a distance of about 19 kilometeres and its journey ends at Bicchupalli.
The passengers aren't some VIPs. They are just like us.
Is this an expensive train? No. The ticket costs just Rs 20. If we calculate, this comes to a revenue of Rs 600 for the Indian Railways, and they are spending Rs 3.5 lakh each year to maintain Bicchupalli station.
Bicchupalli station was inaugurated just a year ago. The inauguration was done by none other than Prime Minister Narendra Modi himself. Indian Railways then introduced a new train service from Balangir Junction to Bicchupalli. The new route is sure to be of great use to locals but it is yet to see much response. Another reason why locals haven't used the route much may be becaude they want extension of the route. 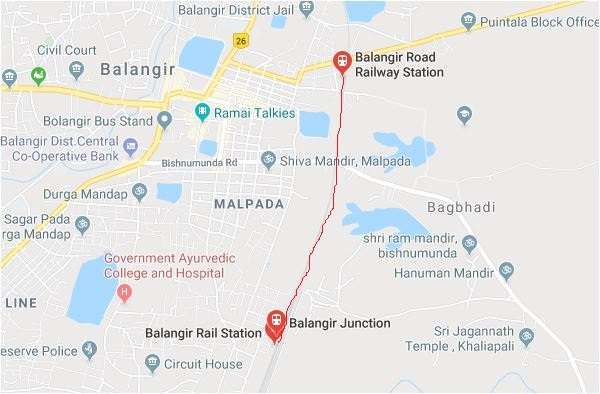 On a serious note, Balangir district is one of the most poverty stricken in the state of Odisha. People in Balangir along with Koraput, Nuapada, Nabarangpur, Malkangiri and Kalahandi Districts are in serious need of welfare schemes and help from the government that includes better railway facilities.
Locals are demanding Balangir-Bichhupalli train service be extended to Sonepur. They have had bad experience of government red-tape for decades
The authorities had made survey to build railway route from Khurda to Balangir way back in 1945. But sanction for the railway line came only in 1994-95. The locals are tired of government's lax attitude towards such an important public facility.
Given these details, it seems fair that Indian Railways has to spend large sum of its funds to maintain Bicchupalli railway station even in the face of meager revenue returns.
Balangir has seen many malnutrition deaths. Government hospitals and health clinics are only option people have to avail even the most basic health facilities. But even these are far and few.
In such a scenario, railway and bus services are the only means of transport people have.
Extension of Balangir-Bicchupalli train service to Sonepur is an urgent need. Let's hope Indian Railways takes notice of this.
Also Read | Biggest restructure in Indian Railways confirmed. Here's what all will change
Watch |  Cabinet approves MoU between India, UK for Indian Railways' energy efficiency