They all are members of the notorious 'Chhote Choudhary gang' who is a resident of Palni Village, PS Manpur District Nalanda.

In a major success in cracking down on cyber fraudsters cheating needy people in the name of COVID-19 help, Delhi Police Crime Branch Inter State Cell has busted a Nalanda-based interstate gang and arrested four persons involved in cheating innocent people on the pretext of supplying oxygen cylinders, concentrators etc. during the second wave of coronavirus pandemic.
The arrested persons are Deepak (21-year-old), Pankaj (26-year-old), Sarvan (35-year-old) and Mithlesh (36-year-old).
They all are members of the notorious 'Chhote Choudhary gang' who is a resident of Palni Village, PS Manpur District Nalanda. They were arrested from Bihar Sharif, Nalanda, Bihar. The accused have admitted to having cheated more than 300 persons including the complainant of this instant case, in the name of covid help. Transactions of more than Rs 1.5 Crore have been discovered from the bank accounts they were using to defraud people to deposit money into. 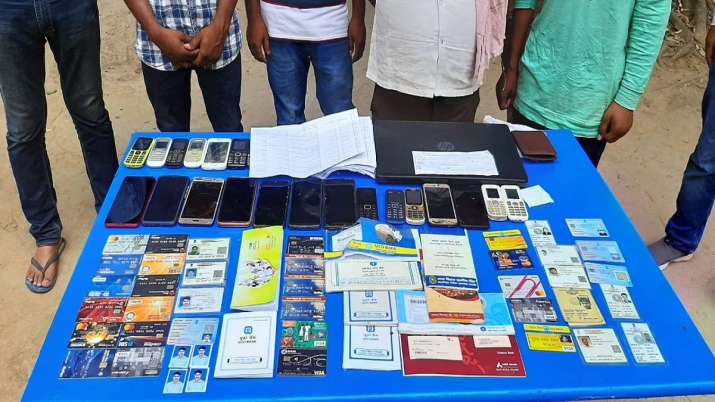 In the last one month since lockdown in Delhi, the Covid Helpline of Delhi Police #01123469900, ERSS #112 and Cyber Helpline #155260 were dedicated to receiving complaints and reports regarding online cheating happening with needy people desperately looking for oxygen cylinders, medicines, injections and other medical needs for their near and dear ones in a state of short supply.
Most of these cheating and frauds took place using social media and instant payment transfer methods. Over 500 cases have been registered and investigations are being done by district cyber units, CyPAD and Crime Branch.
On one such case, the complainant was in dire need of oxygen cylinder for his relative admitted in DDU hospital. In order to procure two oxygen cylinders for his relative, the complainant contacted one Sachin (contact number: +919432949183‬), whose number he got from social media posts.
Sachin offered him two cylinders for Rs. 23950/-. Finding no other options, the complainant paid the money through Paytm and bank transfer. However, neither the cylinders were delivered to him not the fraudster thereafter took any call from the complainant after getting the money. The payment was done in 4 parts as: ‬‬‬‬
1. Rs 10,000/ and Rs 5,000/- in Paytm No. 9771201894
2. Rs 5,000/ and Rs 3,950/- in A/c No. 31130921921, IFSC Code: SBIN0000300, Account holder: Balanath Giri, State Bank of India.
A team led by Insp Vivekanand Jha, comprising of SI Lokender, SI Sanjay, ASI Dharmender, ASI Shripal, ASI Ravinder, HC Pawan, HC Vinod, Const Praveen, under close supervision of ACP Shri Sandeep Lamba was constituted to trace and nab the gang. On the above complaint a case was registered at Crime Branch and investigation was taken up.
During the course of enquiry, the trail of cheated money was followed and it was found that the money was transferred to one UCO Bank account, Malad Branch, Mumbai in the name of Ms. Ruksana Khatoon. After technical investigation, the culprits were zeroed in the area of Nalanda, Bihar.
From the interrogation of the accused persons, it is revealed that they are members of Chhote Chaudhary gang operating from Nalanda area, Bihar. Chhote Chodhary s/o Raghav Choudhary @ Ghamandi r/o Village- Palni, PS Manpur, Bihar Sharif, Nalanda, Bihar is operating the gang for 2-3 years and has accumulated huge property from the cheating money. He has engaged 200-300 persons of the area for this duping business and engaged them in different verticals.
He used to cheat people on different pretext like- friendship on phone call, flipkart etc.
During pandemic, Chhote Chaudhary found an opportunity in the rising demand for Oxygen cylinders, Concentrators and started cheating people on this pretext through his accomplices. For this purpose, his accomplice Deepak would arrange bank accounts for receiving of cheated money and withdrawing cash.
Deepak further enrolled accused Sarvan, who provided him bank accounts opened on the basis of forged credentials at the rate of Rs 25,000/- per account. Deepak also engaged accused Mithlesh, who would withdraw money from ATM booths using the ATM cards supplied to him by Deepak at the rate of 2% for each transaction. Mithlesh would then send the cheated money to Deepak through accused Pankaj, who was deployed for collection of money. Deepak used to pay Rs 4,500/per week to Pankaj as wages.
On analysis of Paytm number 9771201894 used for receiving of money in this case, it was revealed that five other persons had also deposited money in this Paytm account. On enquiry, it has revealed that on 30.04.21, one complainant deposited Rs 7500/- for Oxygen cylinder in this Paytm account but the accused persons did not supply the Oxygen and later her husband expired for want of Oxygen on May 1.
Another victim was duped Rs 3000/- for Regulator of Oxygen cylinder for his brother’s use in home isolation, who is now admitted in Hospital. Another victim paid Rs 6000/- for Oxygen cylinder for her daughter admitted in hospital.
The recovered SIM Cards, Bank Account details and Documents are being scrutinized to find their connections with other cases registered by Delhi Police.
The following items have been recovered and seized by Delhi Police:
1. 21 Mobile Phones used in the commission of crime
2. 22 SIM Cards used in the commission of Crime
3. 09 Mobile numbers connected with the fake accounts and used in the commission of crime
4. 23 ATM Cards of different Banks issued in different names
5. One black colored HP Laptop
6. Documents like Aadhar Cards Voter I-Cards etc of other persons used in opening Bank Accounts
7. Cash Rupees 19,500
The seized SIM Cards, Bank account details and other documents are being scrutinized to connect them with other cases.
Delhi Police teams are stationed in other states to conduct raids. Further investigation is on to trace and arrest the gang leader Chhote Choudhary and his key associates in running the duping racket.