The Delhi government has set up two control rooms for monitoring and managing the supply of "COVID-19 management drugs", amid a massive rise in coronavirus cases in the national capital.

Delhi had Sunday recorded its biggest daily jump in COVID-19 tally with 25,462 fresh cases, while the positivity rate shot up to 29. 74 per cent-meaning almost every third sample being tested in the city is turning out to be positive.

In an order on Monday, the government's Drugs Control Department said the step to establish the control rooms has been taken to address reports of "acute shortage of COVID-19 management drugs due to a sudden rise in COVID-19 cases in Delhi", news agency ANI reported. 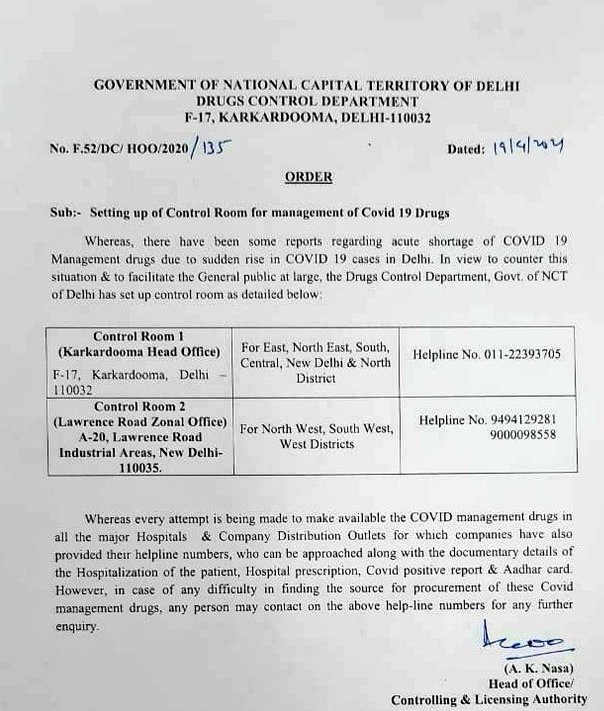 "In view to counter this situation and to facilitate the general public at large, the Drugs Control Department. Government of NCT of Delhi has set up two control rooms," said the order, dated April 19.

For East, North East, South, Central, New Delhi and North districts, the Karkardooma Head Office will serve as the control room and operate the helpline number-011-22393705, according to the order.

The Lawrence Road Zonal Office is the second control room and it will serve the North West, South West, and West districts. It can be reached at helpline number-9494129281 and 9000098558, the order said.

The department said that manufacturing companies can also be reached through their individual helpline numbers.

"Every attempt is being made to make available COVID-19 management drugs in all major hospitals and company distribution outlets for which companies have also provided their helpline numbers, who can be approached along with documentary details of the hospitalization of patient, hospital prescription, COVID positive report and Aadhar card," it said.