Cyclone Tauktae, which intensified into a "extremely severe cyclonic storm", made landfall in Gujarat Monday evening, triggering heavy rains in the region.

Cyclone Tauktae, which intensified into a "extremely severe cyclonic storm", made landfall in Gujarat Monday evening, triggering devastating winds and heavy rains in the region. Earlier, Prime Minister Narendra Modi spoke to Chief ministers of Maharashtra, Gujarat, Goa and the Lieutenant Governor of Daman and Diu to take stock of the situation. According to an update posted by the India Meteorological Department (IMD) at 10:30 pm on Monday, Tauktae was continuing its landfall process.

The landfall on the western coast came after the cyclone dumped heavy rains on Mumbai, forcing the evacuation of over 1.5 lakh people in Gujarat and leaving two barges with 410 people on board adrift in the Arabian Sea. Six persons were killed in Maharashtra's Konkan region in separate incidents related to the severe cyclonic storm and three sailors remained missing after two boats sank in the sea.

11:00 PM: Chhatrapati Shivaji Maharaj International Airport has resumed operations with effect from 2200 hours on 17th May

10:15 PM: Services at Mumbai airport have been resumed after remaining shut for 11 hours in view of heavy rains that lashed the city and other parts of Maharashtra as Cyclone Tauktae hammered the region on Monday.

8:17 PM: Mumbai's Chhatrapati Shivaji Maharaj International Airport in Mumbai has been shut till 10 pm today. Ahmedabad airport has been closed till 5 am Tuesday in view of the "very severe" cyclonic storm Tauktae.

Cyclone Tauktae makes landfall in Gujarat after hammering: In Pics

8:00 pm: Mumbai Airport operations closure has been extended up to 2200 hours today

The Indian Army said it has put 180 teams and nine engineer task forces on standby to face any contingency as Cyclone Tauktae is likely to hit the Gujarat coast on Monday evening.

"Sector commanders and Divisional HQ (headquarter) are in touch with District Collectors and the Revenue Commissioner who is the nodal agency for relief activities in Gujarat," the Army said in a statement.

The Army said it has identified likely areas -- talukas as well as districts -- where the impact could be higher and it has geared up its columns to react immediately.

5:50 pm: Mumbai Airport operations closure has been extended up to 2000 hours today

5:03 pm: Trees uprooted, streets waterlogged in different parts of Mumbai due to heavy rain and wind. Visuals from Juhu

4:56 pm: NDRF says two of its Pune teams are enroute to Daman and Diu & Dadra And Nagar Haveli

4:53 pm: PM Modi in a telephonic conversation with CM Vijay Rupani discussed the preparations of the state to face #TauktaeCyclone. PM also expressed his readiness for all help from the Central Govt to the state: Gujarat CMO

Maharashtra Chief Minister Uddhav Thackeray on Monday took stock of the situation in Mumbai, Thane and other coastal districts of the state in the wake of the cyclonic storm.

As Mumbai continued to be battered with heavy rains, over 12,000 citizens were relocated to safer places from the coastal areas. These include 8,380 people in Raigad, 3,896 in Ratnagiri and 144 in Sindhudurg districts.

"On receipt of a request for assistance for Barge 'P305' adrift off Heera Oil Fields in Bombay High area with 273 personnel onboard, warship INS Kochi was sailed with a despatch for Search and Rescue (SAR) assistance," a Navy spokesperson said.

The oil fields are around 70 km southwest of Mumbai.

Mumbai airport has been ordered to be closed till 4 pm. In view of the cyclone Tauktae alert, the operations at the city's Chhatrapati Shivaji Maharaj International Airport (CSMIA) was earlier ordered to remain suspended till 2 pm.

One killed and two injured in Raigad due to cyclone Taukate. 8,383 people have been shifted to a safer place, Office of District Collector, Raigad informed.

Cyclone Tauktae, which has now intensified into an "extremely severe cyclonic storm", is likely to reach Gujarat coast by Monday evening and cross the state coast between 8 pm and 11 pm, the IMD said.

As a precautionary measure, the state administration shifted over one lakh people living in coastal areas of 17 districts to safer places till late Sunday night, and the work resumed on Monday morning, the government said in a release.

At least 17 COVID-19 patients on ventilator support in the Porbandar Civil Hospital's ICU were shifted to other facilities on Monday as a precautionary measure in view of cyclone Tauktae which is heading towards the Gujarat coast, an official said.

Since the ceiling of the Intensive Care Unit ward of the hospital is in a dilapidated condition and may fall off due to the adverse weather, 17 COVID-19 patients from the ICU ward were shifted to other medical facilities, in-charge civil surgeon Dr Alka Lakhani said.

Of these 17 patients, five were shifted to Junagadh and 12 to the Jamnagar Civil Hospital, she said.

Maharashtra Chief Minister Uddhav Thackeray on Monday took stock of the situation in Mumbai, Thane and other coastal districts of the state in the wake of the cyclonic storm Tauktae.

According to an official statement, 12,420 people living in coastal stretches of Ratnagiri, Sindhudurg and Raigad districts have been shifted to safer places. These include 8,380 people in Raigad, 3,896 in Ratnagiri and 144 in Sindhudurg.

Three city-bound flights operated by budget carriers IndiGo and SpiceJet were diverted on Monday following suspension of operations at the Mumbai airport till 2 pm in the wake of the Tuaktae cyclone alert, a statement said.

In a swift response to SOS by an Indian vessel adrift in Arabian Sea, a naval helicopter was dispatched, early morning 17th May, for rescuing the stranded crew of Indian flagged Tug ‘Coromondel Supporter XI’, which was adrift North West of Mangalore, Karnataka. Rough seas, due to cyclone Tauktae, had resulted in flooding of the vessel’s machinery compartments rendering it without propulsion and power supply, and the crew without any support. Four personnel rescued by the helo were transferred to a nearby Coast Guard vessel.

Surat airport has been ordered to be closed for three days from now in view of Tauktae cyclone. The airport will be operational for emergency and relief flights. 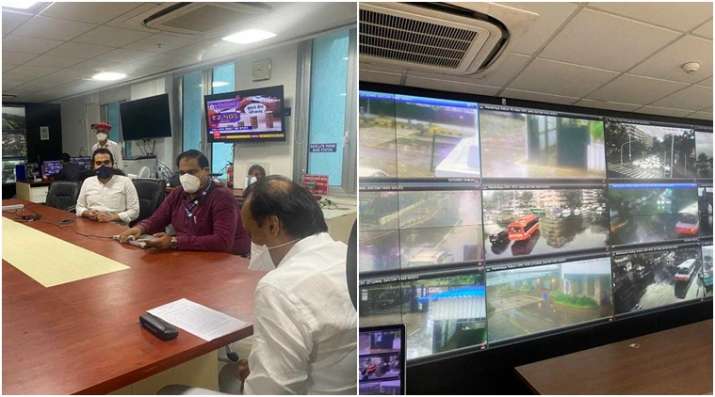 The Indian Coast Guard (ICG) on Monday said it rescued 12 fishermen stranded around 35 nautical miles off the Kochi coast amid rough seas due to the incoming Cyclone Tauktae on the night of May 16. According to the India Meteorological Department (IMD), Tauktae has turned into an "extremely severe cyclonic storm" and is expected to hit the Gujarat coast by the evening.

"Indian fishing boat Jesus stranded 35 nautical miles off Kochi. ICG ship Aryaman rescued the boat with 12 crew. Boat taken under tow by the ICG ship braving rough seas and brought to Kochi on May 16 night. All crew safe and healthy," the ICG said on Twitter.

Local trains services of the Central Railway were disrupted between suburban Ghatkopar and Vikhroli as a tree branch fell on a train heading towards neighbouring Thane, a railway spokesperson said. Efforts were on to restore the train movement on the route, he said.

As a precautionary measure, the monorail services in the city were suspended for the day, the Mumbai Metropolitan Region Development Authority (MMRDA) said. This was a "prompt decision" taken for the safety of commuters, the MMRDA said.

Following heavy rain and gusty winds in Mumbai and its neighbouring areas yesterday, the cyclone is moving towards Gujarat coast on Monday as  "very severe cyclonic storm". There was no water-logging anywhere in the metropolis, but trees were uprooted at several places, they said, adding that no casualty was reported so far.

In view of the high speed winds, the Bandra-Worli sea-link was closed for traffic and people were asked to take alternate routes, a senior official of the Brihanmumbai Municipal Corporation (BMC) said.

The operations at the city's Chhatrapati Shivaji Maharaj International Airport (CSMIA) will remain suspended from 11 am till 2 pm on Monday in view of the cyclone alert, the private airport has notified. India Meteorological Department (IMD) has issued an orange alert for Mumbai, warning of very heavy rains at isolated places with strong winds on Monday as cyclone Tuaktae is likely to pass close to the Mumbai coast. “The operations at Mumbai Airport need to be closed from 11 am local time to 2 pm local time of May 17,” CSMIA said in a notification.