Senior lawyer Prashant Bhushan on Sunday claimed that the marksheet of the shooter who opened fire at a citizenship law protest near Jamia Milia Islamia University on Jan 30 had been forged. Taking to Twitter, Bhushan hit out at news agency ANI for making the marksheet public in the wake of the gun attack, in which one protestor sustained a bullet injury. 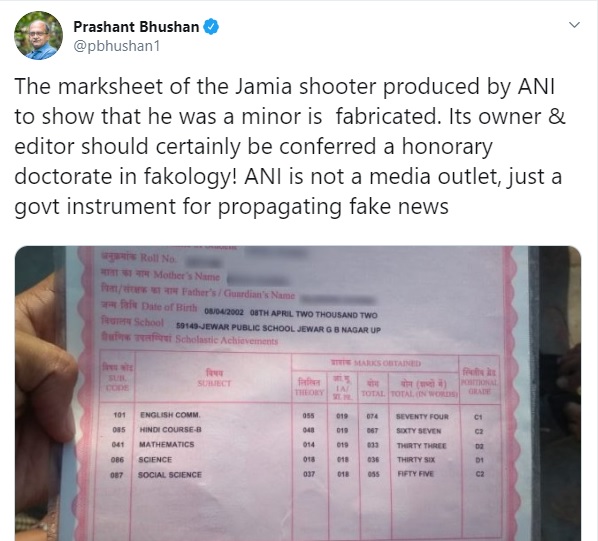 “The marksheet of the Jamia shooter produced by ANI to show that he was a minor is fabricated,” Bhushan said.

“ANI is not a media outlet, just a govt instrument for propagating fake news (sic),” he added.

The lawyer shared a news article on his Twitter feed to back his claim. The article cites comments by social media users who have alleged discrepancies in the school code of the Jewar Public School, as it appears on the marksheet.

Some more information. The school code of Jewar Public School is 60872. The school code in the mark sheet is 59149. Which as per CBSE Site is not valid. Can someone with knowledge clarify whether a school code can be changed? pic.twitter.com/25Ce1pQ2DF

The school, though affiliated with CBSE, doesn't have any students enrolled in class IX and X. They also do not have any section as per CBSE website,” the Twitter user also claims.

Here's something interesting about #RambhaktGopal's Jewar Public School. The school, though affiliated with CBSe, doesn't have any students enrolled in class IX and X. They also do not have any section as per CBSE website. How did @ANI obtain the marksheet? pic.twitter.com/hv0DOuACLQ

Curiously, the marksheet of the shooter surfaced in public minutes after the attack took place. While the marksheet identifies the assailant as a juvenile, the claim is now being disputed.

The shooter was identified as a resident of Greater Noida. His Facebook profile, which has since been taken down, was found to have posts vowing revenge for the killing of Chandan Gupta, a riot victim who lost his life in a shooting incident on Jan 26, 2018 during a Tiranga rally in Kasganj, Uttar Pradesh.

The role of Delhi Police had come under a scanner in the wake of the incident, as videos taken at the time of the gun attack showed police standing behind the shooter as he was gearing up for the shooting. The Delhi Police later clarified on the viral video, stating that the whole assault unfolded in a matter of seconds.

The injured student, Shadab, was hit by the bullet in his arm, following which he was rushed to the Holy Family Hospital nearby. He had to be transferred to AIIMS and was reported to be in a stable condition.