Anti-CAA protests earlier seemed to be focussed in and around Delhi. But there has been a marked shift to Uttar Pradesh in past few days.

Just when situation in New Delhi appeared to be a bit better on Saturday, Uttar Pradesh saw widespread violence and vandalism during protests against Citizenship (Amendment) Act. The death toll in Uttar Pradesh reached 16 while 263 policemen got injured as they tried to contain violence in different parts of the state. 57 policemen among 263 injured policemen have received gunshot wounds. 705 persons were arrested and 4500 were detained across UP. There were incidents of vandalism in Bihar amid statewide bandh called by Lalu Prasad Yadav-led Rashtriya Janata Dal.

There were two major flashpoints on Saturday, Kanpur and Rampur 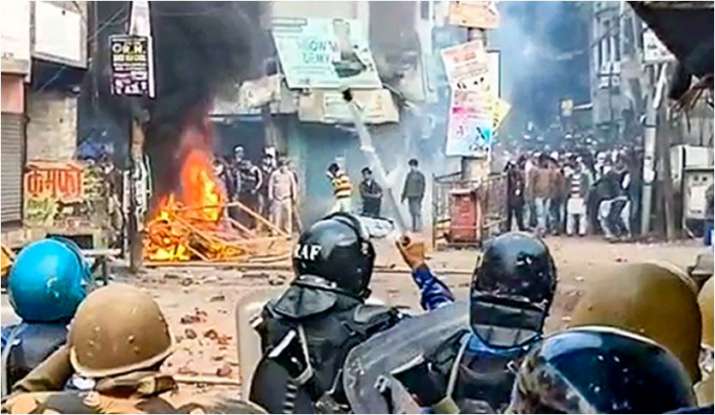 A call for bandh was given in Rampur. Around 400 to 500 protestors, including children in the age group of 12-18 years, gathered at some distance from the Eidgah in the city and stones were pelted at policemen, leading to clashes, officials said.

"Of the five injured, four were referred to Meerut for treatment where one died, while another is in a serious condition. Around a dozen protestors have been detained," District Magistrate (DM) Aunjaneya Singh told PTI.

Samajwadi Party MLA Amitabh Bajpai was arrested as a precautionary measure and his vehicles seized in Kanpur, police said.

In Kanpur, there were number of scuffles between protestors and police personnel. 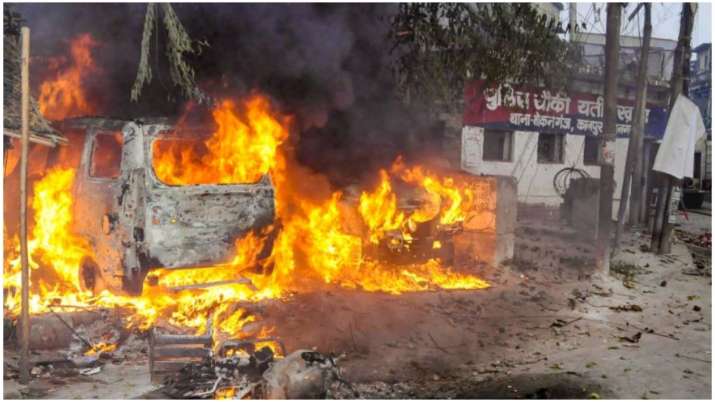 Police had to lob tear gas shells and use canes to chase protesters away. Fire tenders were rushed to control the flame. 12 policemen have been injured in Kanpur violence so far. 5 protesters have been detained.

ADG (Kanpur) Prem Prakash said RAF has been called out along with 'Vajr' vehicles to control the situation. 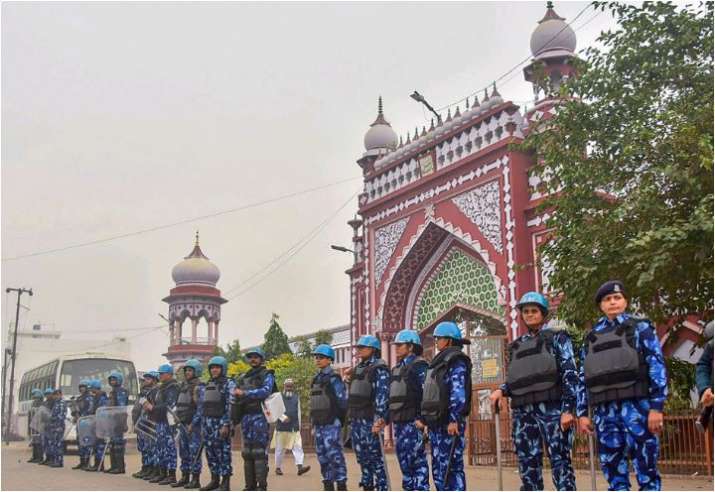 AMU has set up a one-man judicial panel to conduct an internal inquiry into violent incidents that took place on the campus on December 15 and 16.

Police earlier said at least 15 people, including an eight-year-old boy, lost their lives in the state since Thursday in the state.

In Lucknow, 250 protesters have been arrested so far

In Gorakhpur, Section 144 was imposed to prevent unlawful assembly of people.

Police on Saturday released photographs of around 50 people allegedly involved in protest against the amended citizenship law here after the Jumma namaz (Friday prayers) here.

The police said the trouble makers have been identified on the basis of video footage. 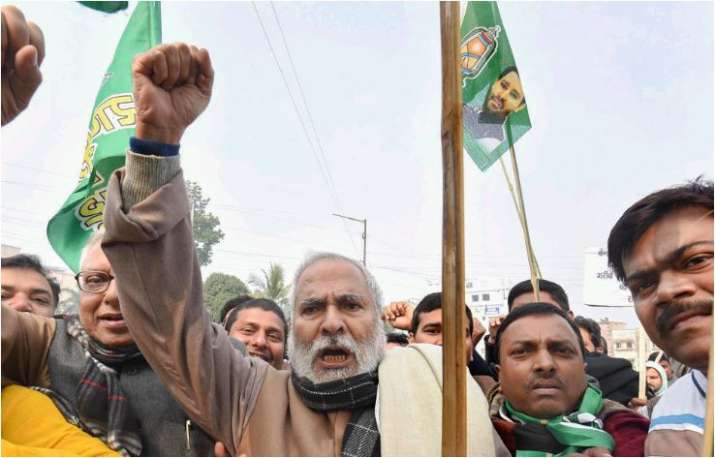 Lalu Prasad Yadav-led Rashtriya Janata Dal (RJD) had called for Bihar Bandh on Saturday. RJD supporters gathered at bus stands, railway tracks and other vantage points in all districts of the state since the crack of dawn, unfazed by the winter fog and chilly winds.

They squatted on railway tracks, disrupting train movement, and blocked bus terminuses at various places to enforce the day-long bandh. 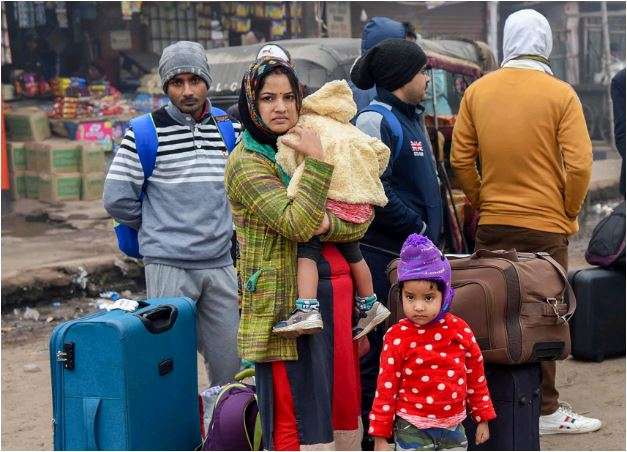 The protesters also smashed windshields of taxis and three-wheelers and damaged cycle-rickshaws that plied on the roads in defiance of the call for the shutdown at the towns of Bhagalpur, Muzaffarpur and outskirts of Patna.

Tejashwi Yadav, leader of the opposition in Bihar Assembly, marched in a large procession against the amended Citizenship Act from the party office in Bir Chand Patel Marg in Patna to Dak

Bungalow crossing, throwing traffic on the busy Fraser Road and Bailey Road out of gear.

At some places in Patna, workers of the RJD, known for their strong arm tactics to enforce bandhs, presented people with roses and urged them with folded hands to support the shutdown in "national interest".

In West Bengal, members of student wings of left parties organised a march at BJP office in Kolkata.

In Meghalaya, curfew imposed in Sadar and Lumdiengjri police station limits in Shillong was relaxed for 16 hours from 5 am on Saturday and no untoward incident was reported in these areas in

The curfew imposed in Dibrugarh following violent protests against the Act was relaxed for 16 hours since 6 am on Saturday as the law and order situation improved, they said.

Mobile internet services were restored on Friday in Assam after nine days of its suspension while broadband services had resumed on December 18. 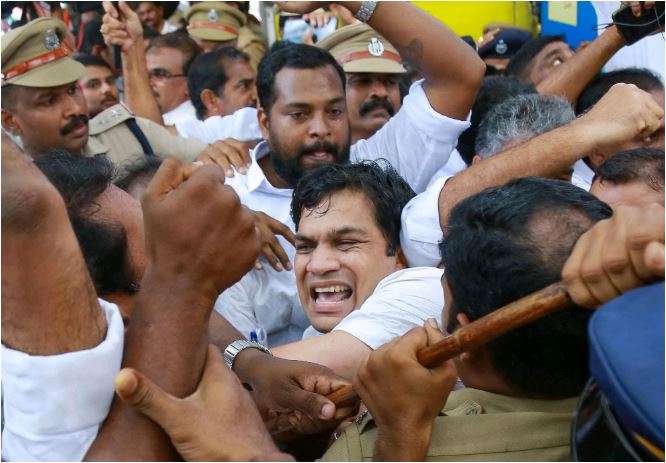 In some places including Kochi, Wayanad and Kozhikode and Thiruvananthapuram the workers tried to break the police barricades and enter central government institutions, leading to minor scuffles with police personnel.

In Tamil Nadu, outfits affiliated to the CPI(M) including the Democratic Youth Federation of India, and Students Federation of India attempted to block trains at the MGR Central Railway Station complex in the state capital, leading to scuffles with police,