Convoy of a Commanding Officer of an Assam Rifles unit ambushed by terrorists in Singhat sub-division of Manipur’s Churachandpur district.

A commanding officer of an Assam Rifles unit named Viplav Tripathi, his wife Anuja and his son Abeer, along with 4 soldiers of quarters were killed in an ambush by terrorists on Saturday. As per reports, four other soldiers sustained injuries in the attack.

No militant organisation has claimed responsibility for the attack so far. 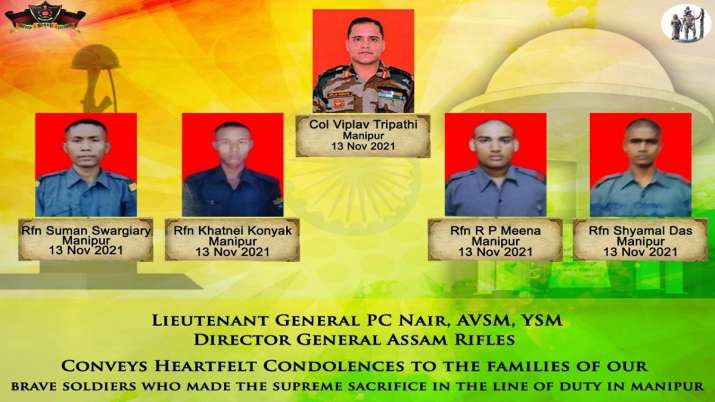 The incident is the first major attack on security forces since June 4, 2018 when an Army convoy was similarly targeted in Chandel district resulting in the death of 18 personnel and injury to others. The personnel of the Road Opening Patrol (ROP) of the 6 Dogra Regiment of the Army were felled.

The state that was for decades in the throes of insurgency was largely calm ever since. On Saturday, Improvised Explosive Devices (IED) burst on a hill road, shattering the tenuous peace in Manipur, before the Assam Rifles personnel engaged the militants in a do-or-die firefight.

Bullets rained in a torrent from hilltops covered in foliage as security personnel ducked for cover and fired from behind trees and boulders.

"Five soldiers including Col Viplav Tripathi Commanding Officer of 46 Assam Rifles have made the supreme sacrifice in the line of duty.

The family of Commanding Officer i.e. wife and child also lost their lives in the incident. DG and all ranks of Assam Rifles offer condolences to the brave soldiers and families of the deceased," the force said in a press statement.

Assam Rifles is the oldest paramilitary force in the country raised in 1835 under the British rule. It is under the administrative jurisdiction of the Ministry of Home Affairs (MHA) but operational control of the Indian Army.