The total number of COVID-19 cases in Andhra Pradesh rose to 1583 after 58 new cases were reported in the last 24 hours, an official said.

The total number of COVID-19 cases in Andhra Pradesh rose to 1583 after 58 new cases were reported in the last 24 hours, an official said. With the latest updates, the major COVID-19 hotbed Kurnool continued to be a cause for worry as it contributed 30 out of the 58 fresh cases reported in the state on Sunday. According to the medical bulletin, 6534 samples were tested during the last 24 hours.

A senior official said the after-effects of Tablighi Jamaat cluster in the district was still being felt. The Tablighi Jamaat effect is still seen in the fresh cases being reported. From the Jamaat attendees to their primary contacts and later the secondary contactsthe chain is continuing, the official said, referring to several people who returned from the event in Delhi testing positive earlier.

The second worst-hit district, Guntur, too added 11 new cases in the last 24 hours ending 9 am on Sunday, taking the total to 319. Krishna district reported eight cases as its count rose to 266.

SPS Nellore and Chittoor, the two other districts in the red zone in AP, reported one fresh case each while Anantapuramu, which is in the orange zone, registered seven.

Vizianagaram, the lone green zone, is the only district not to have reported even one coronavirus case so far. Seven other districts of the state did not report any new case, as per the bulletin.

In the last 24 hours, 18 patients were discharged in Guntur, 13 in Chittoor, 11 in Kurnool, three in East Godavari and two in Krishna, it said.

The government claimed AP to be the number one among all states in the country in conducting 2,152 COVID-19 tests per million population, with the aggregate number of tests touching 1,14,937. 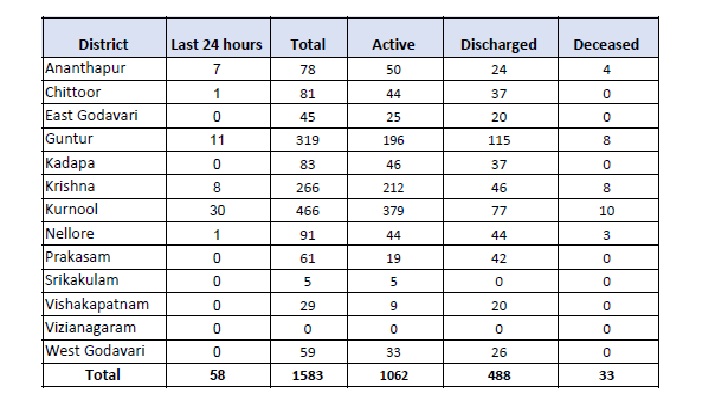 India coronavirus cases have crossed 37,000-mark taking positive patients toll to 37,336 including 1,218 deaths while 9,951 patients have recovered, according to the health ministry's figures released on Saturday. In order to contain the spread of virus, the government has further extended the lockdown for two more weeks. It was supposed to end on May 3 but has now been extended till May 17, however, some relaxations will be provided to green zones, orange zones in the third phase of lockdown.

(With Inputs from PTI)