While US President Donald Trump was just a few kms away, a well-armed mob of 2,000 to 2,500 men descended upon Arun Senior Secondary Modern School in Brijpuri-Mustafabad area in broad daylight. They launched petrol bombs from the school, also vandalising and looting it

Pawan Kumar has been working as a security guard at Arun Modern Public Senior Secondary School for the last 15 years. The school campus, located in the Brijpuri area of north-east Delhi, was turned into a base for rioteers on Feb 25, one of the several schools in the violence-hit district to have faced the fate.

The telltale signs are still all over the school, which has now been reduced to just a four-storey building of four walls. As one enters the school premises through the main gate, vandalised computer screens, tube light holders and course books been reduced to ashes greet the visitors in the main courtyard. As one inspects the classrooms inside, gloom descends at the sight of blackened walls and smashed furniture, much of which has been turned to ashes.

"They were not only to riot. They were here to loot the valuables as well," says Pawan Kumar, clearly traumatised at what he saw between 3:30 PM and 6:00 PM on Feb 25. Kumar says that he made a dash for the back exit after the rioters had entered the school.

"I broke the lock in place on the back door. They would have killed me had they seen me. Fortunately, it was school holiday and there were no students or teachers around," he says.

Still reeling in shock as he tries to recollect the harrowing experience, Kumar claims that the rioters forcibly broke into the school through the main gate and immediately started to smash the tubelights, glasses and CCTV cameras, one room after another.

"They knew where things were and what they were doing. Clearly, there were some locals involved as well," he reckons.

"They had petrol bombs on them and started setting fire to different places in the school," says Kumar, adding that "there were around 2,000 to 2,500 men on the day. "All of them were wearing blue helmets," he recollects.

"Many of them went straight to the fourth floor of the school and started pelting stones, lopping petrol bombs and even fired gunshots in all directions," says the security guard, going on to question why were there no cops when such a large contingent of rioters were laying siege to a school and the entire neighbourhood. 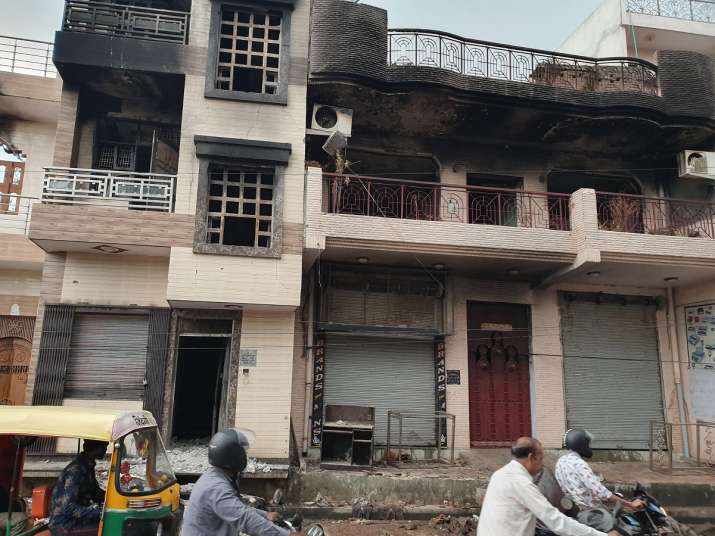 "The police was nowhere to be seen as they laid siege to the school and cut off New Mustafabad from Brij Vihar. Whoever passed through the street where the school was found themselves on the target of these rioters," says Kumar.

Another security guard, working at a nearby building, reveals that new coursebooks to the tune Rs 50-60 lakh went missing after the rioters left. "The 52" LCD has been stolen, as are 25 out of 30 computers," he adds.

He can't hide his astonishment at the fact that the whole episode was unfolding when the US President was in the same city.

"Probably, the police was too busy with providing him security to have cared for the residents here," he remarks sarcastically.

The version of events of Pawan Kumar, who shared his eyewitness account exclusively with India TV, came to light on the same day when Congress MP Rahul Gandhi paid a visit to the school in north-east Delhi.

"He was shown around the computer room, the smart classroom and the principal's office," said another security guard at the school, who didn't wish to be identified by name.

The former Congress President spoke to reporters after he and other leaders were given a round of the school.

"This kind of politics not only translates into loss for this school but for Hindustan and Bharat mata as well. That is why I am here," said Rahul.

Also read: Crime branch to only investigate murder cases during the Delhi riots