Here are the Updates:

After the rain gods battered Vadodara and struck heavily in most of the parts of Gujarat, the state has registered over 46 per cent of the average monsoon rains so far, reports IANS

After drenching Vadodara for more than twelve hours, the rains relented eventually, providing a major relief for the local administration. The torrential downpour, which continued from 6 a.m. on Wednesday till the evening, saw a record breaking 499 millimeters (mm) of rainfall in Vadodara city in just 18 hours.

4:01 pm: The IMD has predicted that heavy to very heavy rainfall is likely to occur at isolated places in the districts of Ratnagiri and Sindhudurg during the next two days.

10:17 am: Flight operations halted at Vadodara Airport till 3 pm today, due to waterlogging and garbage accumulation on the runway.

10:15 am: Jammu and Kashmir: Streets in Srinagar city are waterlogged following rainfall in the region. Srinagar Municipal Corporation is pumping out the water with the help of water pumps.

10:01 am: Four people killed after wall collapses in Bajwa area of Vadodara

09:40 am: It also rained heavily in the catchment area of Vishvamitri river also. So the river is flooding flowing 4 ft above it's danger mark. All 6 bridges on the river are closed. Schools and colleges are closed today. Vadodara court is also closed.

09:38 am: Water level at Ajwa dam steadies at 212.50 ft so as at Vishwamitri river 34 ft at 9 am. Fire brigade boat on road in Fatehgunj area. Tractors are being used for emergency transportation. Lot of people shall need food packets later in day. Power is off in many areas. 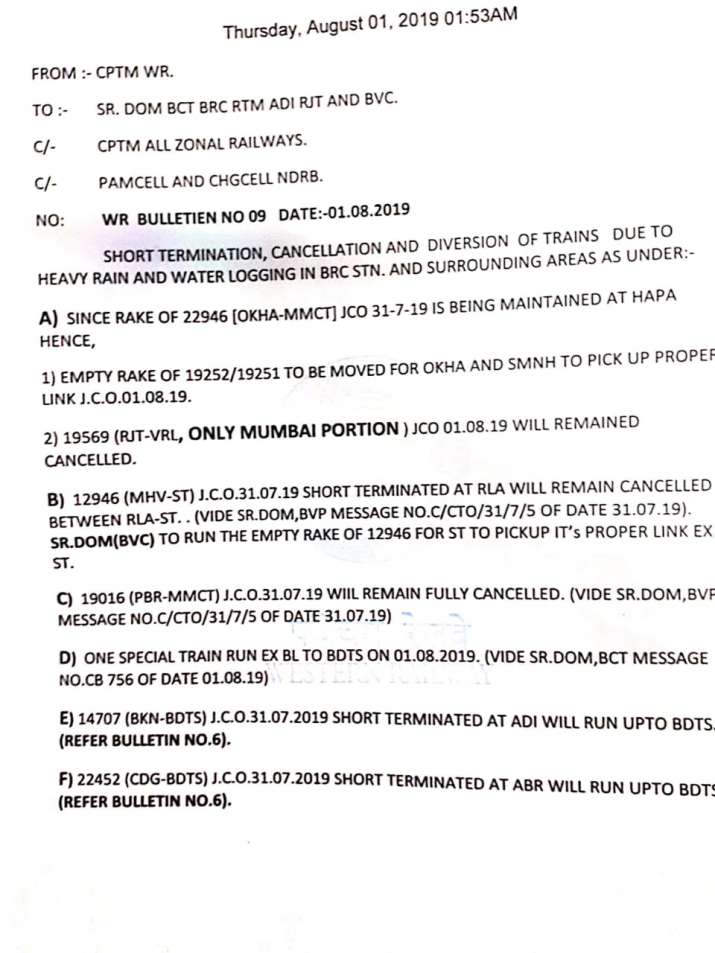 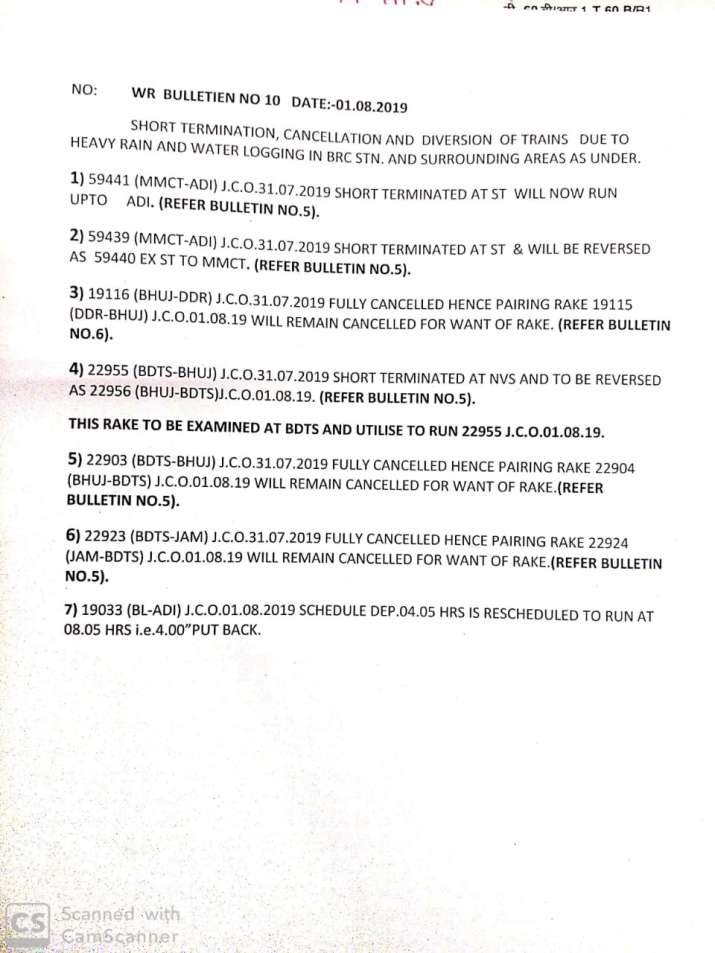 08:50 am: Intermittent rains/showers with heavy falls likely at isolated places in Mumbai city and suburbs

Normal life has been thrown out of gear in Gujarat's Vadodara as the city witnessed a major cloudburst along with incessant rains touching a whopping 18 inches by Wednesday evening. The state government has declared a holiday in schools on Thursday, in view of the heavy downpour in the city. Most areas of Vadodara were seen flooded as it rained 442 mm (nearly 18 inches) between 6 a.m. and 8 p.m. with as much as 424 mm (or 17 inches) pouring in a space of six hours up to 8 p.m.

The highest rainfall during the last 24 hours was witnessed in Vadodara tehsil, with Dabhoi tehsil in the district following at 152 mm, Karjan with 137 mm and Waghodia with 124 mm. The neigbouring Chhota Upepur and Panchmahal districts received 100 mm rainfall.

According to the officials, more than 100 people were rescued from the low-lying areas near the Vishwamitri river from Bhayli suburb in Vadodara.

Road traffic in not only the city, but the entire highway between Vadodara and Surat cities leading to Mumbai was majorly disrupted with traffic jams at several places.

The usually dry Vishwamitri river, which flows through the city, was rising dramatically from 23 feet towards its danger levels of 26 feet, authorities said. The nearby Ajwa dam's water level also increased to 209.45 feet against its warning level of 215 feet.

The torrential downpour created water clogging in Char Darwaja, Fatehpura, Waghodia Road, Soma Lake and other parts of the city and resulting in traffic jams, stretching a kilometre long, all across the city.

Electricity lines were damaged in some areas, leading to a blackout. The fire brigade rescue teams and administration have swung into action to resolve the issues.

Moderate to heavy showers also continued in the rest of the state, especially in south Gujarat with certain areas receiving more than 40 mm of rainfall in the last 12 hours.