Coinciding with inauguration of Sardar Patel's statue in Gujarat's Kevadia, the marathons are aimed at spreading the message of national unity.

People across the country are participating in the Run for Unity marathons being organised to mark the birth anniversary of Sardar Vallabh Bhai Patel. In New Delhi, the event was inaugurated by Union Home Minister Rajnath Singh at Major Dhyanchand Stadium.

Here are the highlights from 'Run for Unity' :

08:20 am: I participated in Run For Unity last year as well. It's a day of extreme significance and I will try my best to witness it (inauguration of Sardar Vallabhbhai Patel's Statue Of Unity): Gymnast Dipa Karmakar at "Run for Unity" in Delhi

Delhi: #Visuals of #RunForUnity from near India Gate. Sardar Vallabhbhai Patel's #StatueOfUnity, the tallest statue in the world, will be inaugurated in Gujarat's Sadhu Bet on his 143rd birth anniversary today. pic.twitter.com/MPSx8VOnlq

07:30 am: Union Home Minister Rajnath Singh addresses the inauguration of 'Run for Unity' from Major Dhyanchand Stadium in New Delhi

06:00 am: Delhi Police traffic advisory for Run For Unity

According to reports, several celebrities, sports stars, and even techies have been roped in to make the marathons a success.

The Government is planning  to make this day special, to reinforce the dedication to preserve and strengthen unity, integrity and security of the nation by celebrating it to commemorate the birth anniversary of Sardar Vallabh Bhai Patel, one of the founding fathers of the Republic of India, he added.

Coinciding with inauguration of Sardar Patel's statue in Gujarat's Kevadia, the marathons are aimed at spreading the message of national unity.

Since 2013, October 31 is celebrated as the ‘Rashtriya Ekta Diwas’ (National Unity Day) to commemorate the legacy of Sarday Patel, who is credited for bringing India's princely states under one flag after independence. The marathons, which annually see thousands of participation, are likely to have an unprecedented turnout this year. 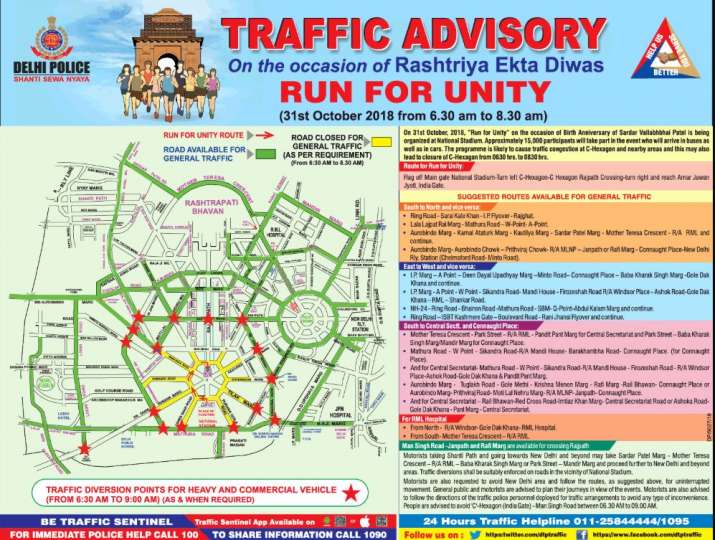