Mumbai Rains | Trains and Flight status: Heavy rains continued to lash Mumbai on Wednesday, with severe waterlogging reported from many areas and authorities advising people to remain indoors. Several trains and flight services have been delayed.

Heavy rains continued to lash Mumbai on Wednesday, with severe waterlogging reported from many areas and authorities advising people to remain indoors. Several trains and flight services have been delayed.

"Heavy rains that started on Tuesday night slowed down Mumbai on Wednesday morning, and by noon, the city had recorded 30.4 mm. Santacruz recorded 121.4 mm rainfall," said the Mumbai unit of India Meteorological Department.

Traffic, though disrupted, continued to move at a snail's place, resulting in huge traffic snarls in the two highways, the main roads, link roads and arterial roads in the city.

Services are running between Andheri & Vasai Road on all 4 lines at certain intervals.

Trains between Vasai Road & Virar are not running due to waterlogging near Nalasopara till further orders.

Due to continuous & heavy rains, services stopped between

Services are running on

Western Railway (WR) had to suspended suburban and long distance services on the Vasai-Virar sector (Palghar) after the railway tracks were submerged under over three feet water. "The services continued with delays on the Vasai-Churchgate sector," said a WR spokesperson. 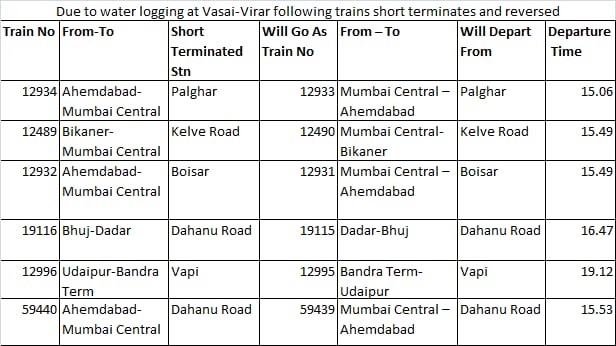 Central Railway (CR) suspended all services between Thane and Chhatrapati Shivaji Maharaj Terminus (CSMT) owing to waterlogging on tracks between Sion-Bandra, said a CR official. Earlier it was hit by 25-30 minutes delay.

These trains are in service:

Trains that are in service as of 1 pm: CSMT-Wadala-Andheri/Goregaon; Vashi-Panvel; Thane-Vashi/Panvel; Thane-Kasara/Karjat/Khopoli. Our team is assessing the water level for resumption of services, said CR spokesperson.

All four lines closed for train traffic between Thane and CSMT. All UP locals will end at Thane and Kalyan.

Incoming and outgoing flight operations at the Mumbai Airport were near normal with delays of around 15 minutes despite the downpour and fluctuating visibility levels.