Monsoon showers wreaked havoc on many parts in India on Monday, throwing life out of gear. Eleven people were killed in rain and lightning related incidents in the country.

Heavy rains are expected to continue pounding on several parts Maharashtra, Gujarat, West Bengal and Uttar Pradesh. Monsoon showers wreaked havoc on many parts in India on Monday, throwing life out of gear. Eleven people were killed in rain and lightning related incidents in the country. Mumbai was the worst affected as incessant showers claimed four lives in less than 24 hours. The financial capital received 231.4 mm rains since Saturday. A rainfall of such magnitude is often categorised as heavy showers. (Read minute-to-minute updates on damaged wreaked by Monsoon on Monday)

The metropolitan is expected to receive heavy rainfall on Tuesday as well. MeT departmet has also issued an alert of heavy to very heavy showers in next 48 hours in Gujarat's Saurashtra region, mainly in Amreli, Bhavnagar, Botad, Gir-Somnath and Rajkot. On Monday, heavy rains lashed several parts of south Gujarat, particularly Valsad, Surat and Navsari districts, causing water-logging and throwing normal life out of gear in the region. However, no loss of life or any major damage to property due to the downpour was reported, officials said.

In West Bengal, metrological department has warned of "heavy to very heavy rainfall" in five northern districts for five consecutive days till June 29. It said several south Bengal districts would also be affected by incessant rainfall over the next three days and issued an alert for North and South 24 Parganas and East Midnapore. The MeT department added that rainfall in most places is most likely over south Bengal districts due to a cyclonic circulation that lies over northwest Bay of Bengal.

The flood situation in Assam saw slight improvement with waters in major rivers receding below the danger level, even as two persons reportedly drowned in the state's Cachar district, taking the death toll to 26. The Assam State Disaster Management Authority (ASDMA) said, a total population of 96,993 in five districts was reeling under the impact of flood, as against 1.94 lakh people in six districts yesterday.

The weatherman has also issued a thunderstorm alert for eastern Uttar Pradesh over next 48 hours.

01:37 pm: According to fresh estimates by the weather department, the Gujarat is likely to receive less rainfall than earlier predicted as the cyclone forming above the state has now moved on towards south Madhya Pradesh. Rainfall will be moderate in next 24 hours and after that only intermittent rain is predicted for the region.

01:00 pm: The monsoon has entered Madhya Pradesh covering Dhar, Alirajpur, Burhanpur, Barwani, Khargone, Jhabua and Khandwa districts and has brought heavy rains to the state capital, bringing down the mercury by a few notches. The monsoon entered the state from the southwest side, the Met office said. In the past 24 hours, Indore has received 8.6 mm of rain, while Dhar 14.2 mm, Damoh 30 mm and Gwalior 3.8 mm.The weather office has predicted heavy rains for Dhar, Jhabua, Alirajpur and Barwani and scattered rains at all other places with thunderstorms and lightning. Humidity was unusually high on Tuesday.

10:43 am: Meanwhile, Delhites had a respite from heat-wave like conditions as the weatherman predicted light showers in the national capital region today. MeT department says Monsoon will pick up pace by today evening and can reach Delhi by June 28 or 29. 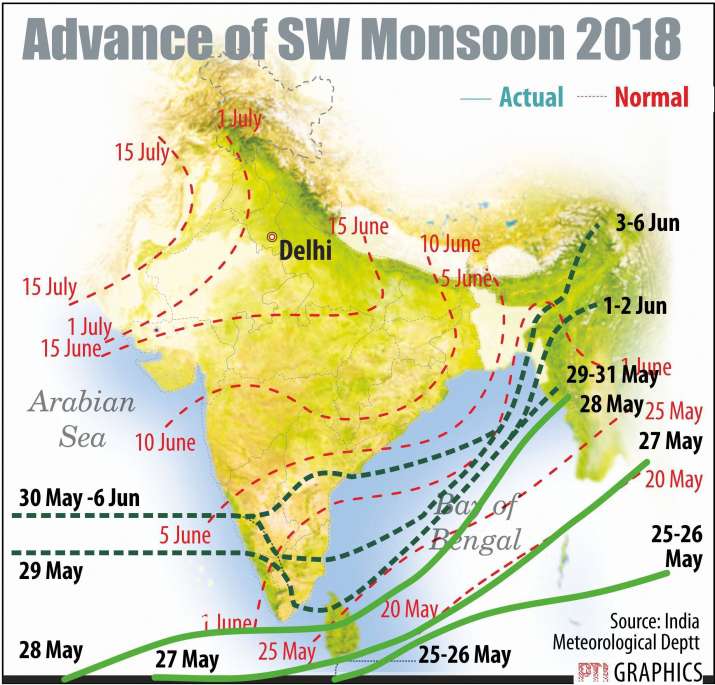 09:13 am: Four people were killed in rain related incidents in Mumbai within last 24 hours. So far, Monsoon has claimed 13 lives in the city. Two others died due to open manholes.

06:30 am: Gujarat's Vadodra is reeling under severe waterlogging after the city received 120 mm rainfall on Monday. The flooded streets and underpasses have brought the traffic to a standstill. An image of City Mayor Dr Jigisaben Seth's car stuck in pothole has gone viral on social media and people are planning the authorities for not fixing the roads and drainage system before Monsoon. Yesterday, two people had died after being electrocuted from a naked fire touching flood waters.

06:00 am: In Maharashtra's Palghar, a bus driver died while trying to save two school children stuck in a ditch on Monday. The school bus driver, Prakash Patil Virar, was ferrying the children from school when two students decided to disembark and play in a seasonal drain and got stuck in flood waters. Virar managed to save them but slipped and lost his life.

05:30 am: Heavy showers pounded Mumbai and adjoining Thane district on Monday as Southwest Monsoon picked up momentum in the region. In Thane, a 13-year-old boy was killed and his parents were injured when a wall collapsed on their house at Wadol village around 2.15 am Monday. Several vehicles were also damaged after walls collapsed in Thane and the metropolis.

05:00 am: In western India, heavy rains lashed several parts of south Gujarat, particularly Valsad, Surat and Navsari districts, causing water-logging and throwing normal life out of gear in the region. However, no loss of life or any major damage to property due to the downpour was reported.