Defence Minister Nirmala Sitharaman took to Twitter to inform the people that appropriate action has been taken in the matter.

The defence ministry's website was on Friday defaced by suspected Chinese hackers and efforts are on to restore it, officials said.

"Action is initiated after the hacking of MoD website (http://mod.nic.in). The website shall be restored shortly. Needless to say, every possible step required to prevent any such eventuality in the future will be taken," she tweeted.

Ministry officials said there were Chinese characters on the website and there were clear indications that Chinese hackers were involved in defacing it.

The website is maintained by by the National Informatics Centre, an entity which works under Ministry of Electronics and Information Technology.

"The National Informatics Centre, which maintains the website, is trying to restore it," a spokesperson in the ministry said.

Soon after the Defence Ministry website was hacked, the official site of the Union Home Ministry and law minitsry also crashed on Friday.

When opened, the home page of the Home Ministry site (www.mha.gov.in) displayed a message "the requested service is temporarily unavailable. Sorry for Inconvenience. It would be available soon." 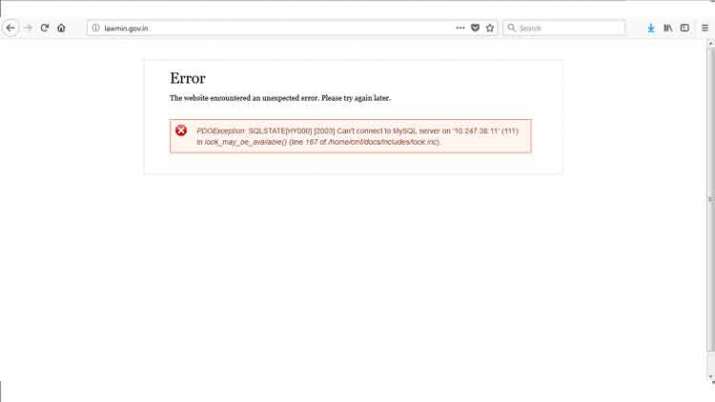 The website of the home ministry was also temporarily taken down as part of extra precautions in the wake of the hacking of the defence ministry site, says a PTI report.

An official spokesperson said the National Informatics Centre, which hosts the MHA site, is upgrading the security system of the website leading to its temporary suspension.

"The requested service is temporarily unavailable. Sorry for Inconvenience. It would be available soon," is the message that comes when one opens the MHA website.

The spokesperson said the move has been taken as part of extra precautions.

The MHA site was down soon after the news came that the defence ministry's website was hacked.

However, National Cyber Security Coordinator Gulshan Rai told Hindustan Times that there was no cyber attack or hacking of websites of ministry.

"Websites are down due to storage failure at NIC," he said.

(With inputs from PTI, IANS)