Senior Congress leader Abhishek Manu Singhvi, while addressing a press briefing at party headquarters in New Delhi, said no letter was addressed to the home ministry.

The Congress has denied writing any letter on its chief Rahul Gandhi's security to the Ministry of Home Affairs (MHA).

Senior Congress leader Abhishek Manu Singhvi, while addressing a press briefing at party headquarters in New Delhi, said no letter was addressed to the home ministry.

"Rahul ji is an SPG protectee. And the responsibility of maintaining his security cover rests on their shoulders," he added.

When asked how ANI news agency procured a letter undersigned by party leaders, he said, "Mujhe kya pata. Aap ke biraadari ke log hain; aapko pata hona chahiye. [How would I know? They belong to your profession; you should know.]"

Earlier in the day, media houses took cognisance of one of the tweets by the news agency and enquired the MHA which also said no letter was addressed to them. 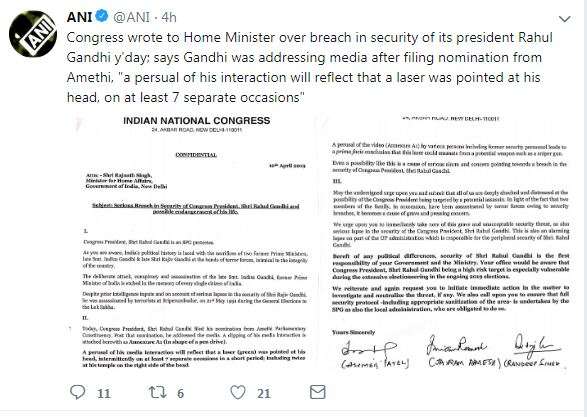 After the paperwork was done, the Congress chief organised an impromptu press briefing -- during which a green laser light was observed to have been pointed at his head.

In the quoted letter, the Congress party said the security breach happened on April 10 when Rahul Gandhi was addressing the media after filing nomination.

"…a laser (green) was pointed at his head, intermittently on at least 7 separate occasions in a short period; including twice at his temple on the right side of the head," the letter said.

"A perusal of the video by various persons including former security personnel leads to a prima facie conclusion that this laser could emanate from a potential weapon such as a sniper gun," the letter added, referring to a video clip of Rahul's interaction with the media which has also been provided to the MHA.

The MHA, however, begged to differ, citing, "As soon as MHA's attention was drawn to reports of incident of green light being pointed at him [Rahul Gandhi] yesterday in Amethi, the Director (SPG) was asked to verify factual position."

Director SPG informed MHA that the green light shown in the clipping was found to be that of a mobile phone used by AICC photographer, who was video graphing the impromptu press interaction of Rahul Gandhi near the collectorate in Amethi, the MHA statement added.