Amarnath Yatra 2020: The first aarti of yearly Amarnath yatra 2020 took place at holy Amarnath cave today on July 5th in the presence a very few people keeping in mind the coronavirus pandemic. Only LG Jammu & Kashmir G C Murmu was present at the holy cave with a few officials and pujaris.

Amarnath Yatra 2020: The first aarti of yearly Amarnath yatra 2020 took place at holy Amarnath cave today on July 5th in the presence a very few people keeping in mind the coronavirus pandemic. Only LG Jammu & Kashmir G C Murmu was present at the holy cave with a few officials and pujaris. As today is Guru Purnima which is a religious day for the opening of the yatra. So keeping in mind the religious faith, the first aarti was performed at the cave. In the wake of COVID19, Amarnath Yatra was canceled. While the new yatra dates for the general public will be announced later, mo pilgrim was allowed from any route to the cave during the first aarti.

It is said that the Amarnath Yatra 2020 will begin from 21 July for general people. The first aarti was performed by LG of Jammu & Kashmir. Have a look at the first visuals of the aarti here-

First Visuals of Amarnath Puja. LG of Jammu Kashmir Performed Aarti with Few officials and Pujari. No Pilgrim has been allowed to attend the Puja due to Covid. Although security arrangements have been put in place. @indiatvnews pic.twitter.com/Nxrbia4AYJ

First arti of yearly Amarnath yatra 2020 will be done at holy Amarnath cave today , LG Jammu Kashmir G C murmu will be present at holy cave with only few officials and pujari ,As today is Ashaad Purnima and which is religious day for opening of yatra @indiatvnews pic.twitter.com/nmzhp6YtFF

What to expect during Amarnath Yatra 2020?

Due to coronavirus pandemic, the authorities have decided to limit the number of pilgrims during the Amarnath Yatra as all of them will undergo the COVID19 test. Jammu and Kashmir Chief Secretary BVR Subramanyam on Saturday announced that only 500 pilgrims will be allowed each day this year. He further said that the yatris entering J&K have to be sampled, tested, and quarantined till they are reported to be negative.

"The Amarnath Yatra will have to be held in a restricted manner so that SOP for SoPs for COVID-19 are strictly adhered to during the conduct of the Yatra," said Chief Secretary Subramanyam. 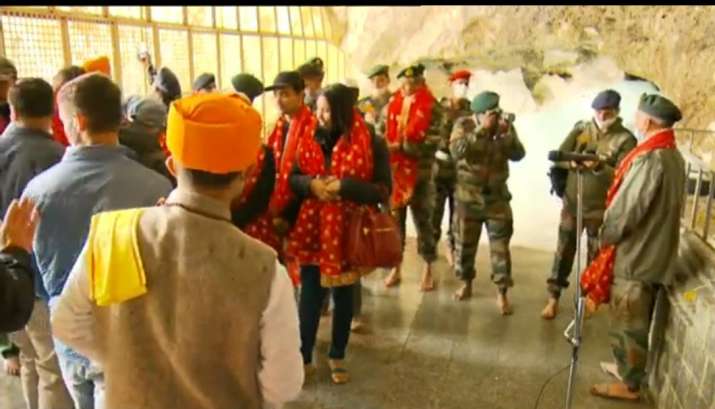 The Amarnath Yatra this year has been cut down to 15 days rather than the regular 43 days in wake of COVID19. Also, children below 15 years of age and adults above 60 years of age are not allowed to embark on the pilgrimage.

One route has been decided for all the devotees who embark on Amarnath yatra i.e. through the north Kashmir Baltal route. "No pilgrim will be allowed to undertake this year's Yatra through the Pahalgam route", officials said.

Amarnath Yatra 2020 will conclude on August 3, on the Raksha Bandhan festival which will coincide with Shravan Purnima.