Leave it to Bigg Boss 13 fame Shehnaaz gill to break the internet with her otherworldly personality and uber-chic style. The 'Punjab Ki Katrina kaif' has come a long way since her appearance in the controversial reality show. she has not only made a special place in the viewers' hearts but has also undergone a drastic physical transformation. Her sense of fashion has become the talk of the town. Shehnaaz recently featured in Youtuber Janice Sequeira's show Social Media Stars Season 3 and rocked a black turtleneck and plaid skirt. She took inspiration from American singer Selena Gomez for the chic look.

Soon after Shehnaaz Gill shot for the episode along with social media sensation Yashraj Mukhate, her pictures and videos went viral on the internet. In the photos, the diva was seen flaunting a black top paired with a plaid skirt. She completed her look with a statement necklace and earrings. As Shehnaaz broke the internet with her pictures, old photos of Selena Gomez wearing a similar outfit also surfaced.

Have a look and decide whose look did you like better- Shehnaaz Gill or Selena Gomez. 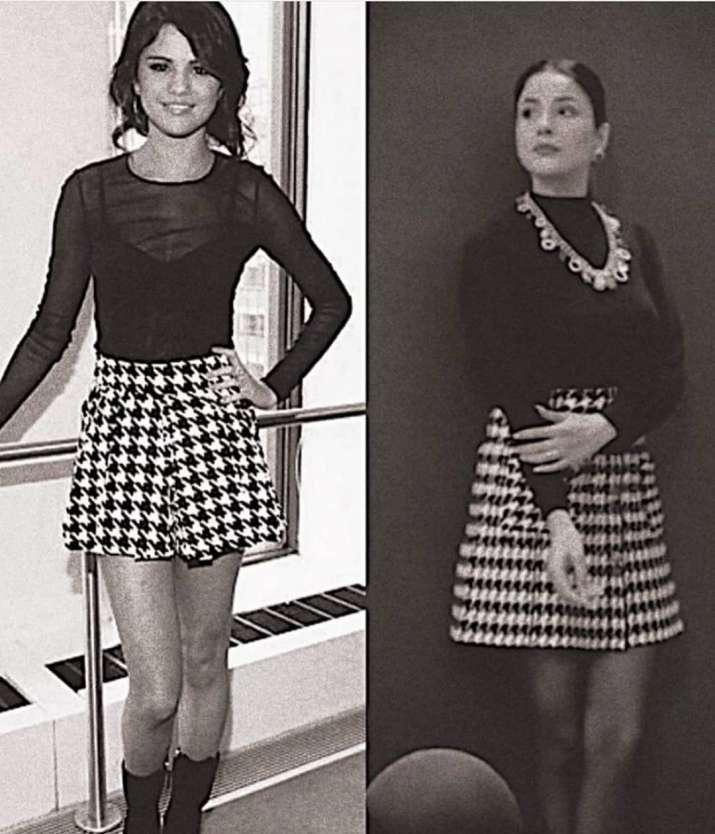 YouTuber Janice Sequeira on Wednesday released the trailer of her first episode of Social Media Stars Season 3. Shehnaaz and Yashraj Mukhate will grace the very first episode of the show. Janice wrote, "Couldn’t have asked for a better pair to start S03 of #SocialMediaStarWithJanice with!"

The duo's chemistry will definitely leave the fans to go ROFL-ing. The trailer itself gives a sneak peek into their fun banter and fun conversation.

Check out the trailer here-

Sharing gorgeous pictures with Bollywood actor  Arjun Kapoor, who felicitated Shehnaaz, the diva revealed that she is overwhelmed. She said, "There have been many moments in my short life, where I have been inspired by many many talented women and today to get this honour, is truly overwhelming. With a promise to entertain forever, I humbly accept the ET Inspiring women as a promising Fresh Face award."

On the work front, Shehnaaz Gill has featured in many music videos after her Bigg Boss 13 stint. She will soon be seen in a Punjabi film titled Honsla Rakh. The actress will play a role of a pregnant woman opposite Diljit Dosanjh in the film. The film is scheduled to hit the theatres on Dussehra this year. Other details about the film are still under wraps.

Shehnaaz also has a couple of music videos coming up with Bigg Boss 13 winner and rumoured beau Sidharth Shukla.