The longest Hindu festival, nine days long navratri 2021 comes to an end with Ram Navami today. The devotees all over the country end their fast today by worshiping Goddess Siddhidatri and kanya puja.

The longest Hindu festival, nine days long navratri 2021 comes to an end with Ram Navami today. The devotees all over the country end their fast today by worshiping Goddess Siddhidatri and kanya puja. It is the ninth manifestation of Maa Durga. Today, people invite little girls to their house, feed them and take blessings. It is said that they are the avatars of Maa Durga. According to folklore, Maa Siddhidatri has the power to fulfill all the wishes of her devotees and those who pray to her, get relief from all their sufferings.

Goddess Siddhidatri is worshiped on the final day i.e. ninth day of Navratri. Siddhdatri-- Siddhi means meditative ability and Dhatri means giver. This manifestation of Maa durga sits on a lotus and has four arms which holds a lotus, mace, conch shell and discus. This day is also observed as Mahanavami. As per Hindu mythology, Lord Shiva had attained all the siddhis by the grace of Goddess Siddhidatri and this is the reason why his half body was that of the Goddess; he was known as Ardhanareshwara.

On this day, after offering prayers to Goddess Siddhidatri, other Gods and Goddesses are worshiped and a special havan is organized. Then, mantras from the Durga Saptashati are also recited to invoke the Goddess. The Beej mantra such as Om Hreem Kleem Chamundaye Vichay Namo Namah should be recited 108 times while giving ahuti in the havan. The prasad should be distributed among the devotees present for the havan at the end.

Kanya puja is also performed on Ram Navami. Firstly, wash the feet of the nine little girls then offer them food which is called kanya-prasadam. It includes suji (semolina flour) ka halwa, poori and kala chana along with a coconut and some money. 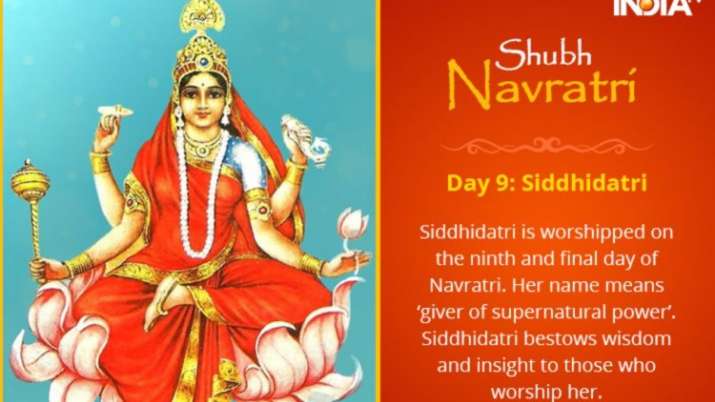