The Ram Mandir-Babri Masjid dispute has been a socio-religious debate in India for decades. It focusses on a plot of land in Ayodhya, a city located in Faizabad district of Uttar Pradesh. The site has been regarded holy among Hindus, who believe it to be the birthplace of Lord Ram.

The Ram Mandir-Babri Masjid dispute has been a socio-religious debate in India for decades. It focusses on a plot of land in Ayodhya, a city located in Faizabad district of Uttar Pradesh. The site has been regarded holy among Hindus, who believe it to be the birthplace of Lord Ram.

Beliefs say a Hindu temple, previously constructed at the site, was demolished to build up a mosque, which came to be known as the Babri Masjid. Muslims, on the other hand, say that the land is their sacred religious place - built by Mir Baqi in 1528 - and that Hindus desecrated it in 1949, when some people placed idols of Lord Ram inside the mosque, under the cover of darkness.

What is the Ayodhya land dispute?

On December 6, 1992, the Babri Masjid was demolished during a political rally, which later took the face of riots. More than 1,000 people were killed in these riots. In a landmark hearing of the Ayodhya land dispute case, the Allahabad High Court, on 30 September 2010, divided the land of the site into three parts.

According to the court ruling, 1/3 of the total (2.77 acres) of the land went to the Ram Lalla or Infant Rama represented by the Hindu Maha Sabha for the construction of the Ram temple, 1/3 was allocated to the Islamic Sunni Waqf Board and the remaining 1/3 went to a Hindu religious denomination Nirmohi Akhara.

While the three-judge bench that pronounced the judgement was not unequivocal that the disputed structure was constructed after demolition of a temple, it did agree that a temple or a temple structure predated the mosque at the same site.

The court used the excavations by the Archaeological Survey of India as evidence by the court that the predating structure was a massive Hindu religious building. 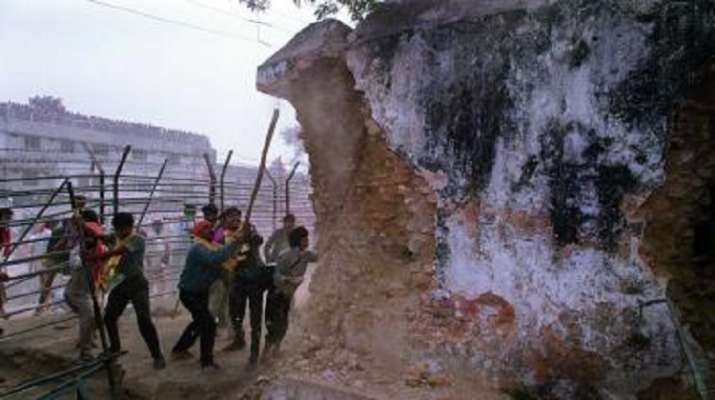 How did the Ram Mandir dispute arise?

In an attempt to stake claim of Lord Ram's birthplace and convert the existing mosque into a temple, idols of Ram and Sita were placed inside the mosque in December 1949. The then prime minister Jawaharlal Nehru then talked to the then Uttar Pradesh chief minister, GB Pant, and asked him to remove the idols from inside the mosque premises.

Nehru's concerns were, however, dismissed by many Hindu nationalist leaders, who refused to remove the idols. A dispute soon broke out, which prompted the lockdown of the mosque gates for the next 40 years.

Since then, the Ram Janmabhoomi-Babri Masjid dispute has remained a subject of focus. In the most recent follow-up, the Supreme Court on May 10, 2019, granted time to three-member mediation committee till August 15, to find a solution. 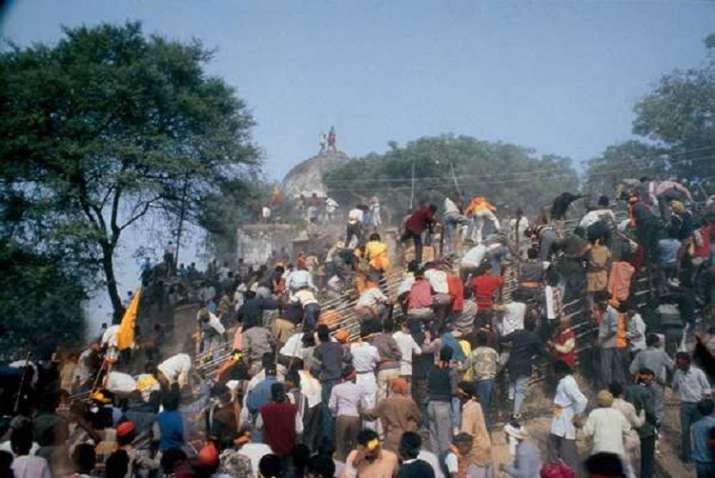 Here's how Ayodhya Ram Mandir may look like once built:

While there is still no clarity over the matter, craftsmen at a workshop in Ayodhya are busy giving shape to huge rocks which will be used in the Ram Temple.

The sprawling workshop also houses a wooden model of a 'proposed Ram Temple' in a glass encasement. Many devotees stream in from various parts of India; some out of curiosity, other led by local tour guides.

Annu Bhai Sompura, in-charge of the workshop, points out to rows and rows of huge, ornately carved stones stacked up on the ground in the open in its premises, which he said are "ready-to-move blocks that can be easily assembled". 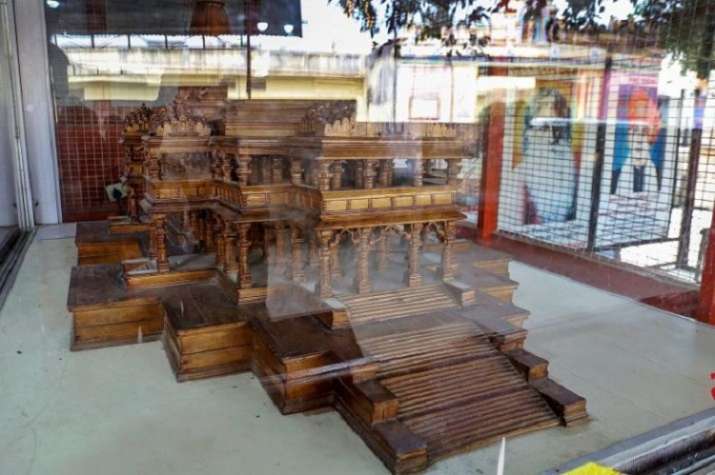 The Ram Mandir-Babri Masjid dispute can best be explained through a timeline of events, which have occurred since the beginning.

1528 - During the reign of Babur, the first Mughal emperor, the old Hindu temple was demolished and a mosque was constructed at the same place in Ayodhya and named after Babur.

1853 - The first recorded communal clashes over the site date to this year.

1859 - The colonial British administration put a fence around the site, denominating separate areas of worship for Hindus and Muslims. That is how it stood for about 90 years.

1949 December - Idols were placed inside the mosque, both sides to the dispute filed civil suits. The government locked the gates, saying the matter was sub judice and declared the area disputed. The civil suits were filed for ownership of the Plot no 583 of the area.

1961 - Case filed in Indian courts against the forceful occupation of the Babri Mosque and placing of idols within it.

1984 - The movement to build a temple at the site, which Hindus claimed was the birthplace of Lord Ram, gathered momentum when Hindu groups formed a committee to spearhead the construction of a temple at the Ramjanmabhoomi site.

1986 - A district judge ordered the gates of the mosque to be opened after 37 years and allowed Hindus to worship inside the "disputed structure." A Babri Mosque Action Committee was formed as Muslims protested the move to allow Hindu prayers at the site. The gates were opened in less than an hour after the court decision.

1989 - The clamour for building a Ram temple was growing. In February, VHP proclaimed that a Shila or a stone will be established for construction of the temple near the area. In November, the Vishwa Hindu Parishad laid foundations of a temple on land adjacent to the "disputed structure" in presence of Home Minister Sh Boota Singh and then Chief Minister Sh ND Tiwari. There were sporadic clashes in the country such as Bhagalpur in Bihar.

1990 - VP Singh became the Prime Minister of India with support from BJP that had won 58 seats in the election, a massive improvement from its last tally of two seats. The then BJP president Lal Krishna Advani took out a cross-country rath yatra to garner support for the move to build a Ram temple at the site. On October 23, he was arrested in Bihar during the yatra, following which BJP took back its support to the government.

Later Chandrashekhar became the Prime Minister of India with support of the Congress. On October 30, many were gunned down by the police on orders of the then Uttar Pradesh Chief Minister Mulayam Singh Yadav, when they gathered in Ayodhya as participants of the rath yatra; their bodies were thrown in river Saryu.

1991 - Congress came to power at centre after election in 1991, while BJP became the major opposition party in the center and came to power in many states such as Madhya Pradesh, Rajasthan, Himachal Pradesh and Uttar Pradesh. Kalyan Singh was elected as the Chief Minister of Uttar Pradesh. State government acquired 2.77-acre land in the area and gave it on lease to RamJanmBhoomi Nyas Trust. The Allahabad High Court stopped any permanent construction activity in the area. Kalyan Singh publicly supported the movement while Central Government took no action to curb the increasing tensions. In spite of the High Court judgement, the disputed area was leveled.

1992 - Kalyan Singh took steps to support the movement such as making entry into area easier, promising no firing on Karsevaks, opposing the decision of the central government to send Central Police force in the area, etc. In July, several thousand Karsevaks assembled in the area and the work for the maintenance of temple began. This activity was stopped after the intervention of the prime minister. Meetings started between Babri Masjid Action Committee and VHP leaders in presence of the home minister. On 30 October, Dharam Sansad of VHP proclaimed in Delhi that the talks have failed and Karseva will presume from 6 December. The Central Government was considering the deployment of central police forces in the area and dissolution of state government but in the end, decided against it. The case was being heard in the Supreme Court which told that State Government is responsible for ensuring law and order in the area. The government was discussing it in Cabinet Committee meeting and Rashtriya Ekta Parishad. BJP boycotted the Parishad. The Allahabad High Court was hearing the matter of the legality of the structure of foundation laid in 1989.

1992 December 6th - The Babri Mosque was demolished by a gathering of near 200,000 Karsevaks. Communal riots across India followed.

1992 December 16th - Ten days after the demolition, the Congress government at the Centre, headed by PV Narasimha Rao, set up a commission of inquiry under Justice Liberhan.

1993 - Three months after being constituted, the Liberhan Commission began investigations into who and what led to the demolition of the Babri Mosque.

2001 - Tensions rose on the anniversary of the demolition of the mosque as the VHP reaffirmed its resolve to build a temple at the site.

2003 - The court ordered a survey to find out whether a temple to Lord Ram existed on the site. In August, the survey presented evidence of a temple under the mosque. Muslim groups disputed the findings.

2003 September - A court ruled that seven Hindu leaders, including some prominent BJP leaders, should stand trial for inciting the destruction of the Babri Mosque.

2004 November - An Uttar Pradesh court ruled that an earlier order which exonerated LK Advani for his role in the destruction of the mosque should be reviewed.

2007 - The Supreme Court refused to admit a review petition on the Ayodhya dispute.

2009 - The Liberhan Commission, which was instituted ten days after the demolition of the Babri Mosque in 1992, submitted its report on 30 June — almost 17 years after it began its inquiry. Its contents were not made public.

2010 December - The Akhil Bharatiya Hindu Mahasabha and Sunni Waqf Board moved to the Supreme Court of India, challenging part of the Allahabad High Court’s verdict.

2011 May 9 - Supreme Court of India stayed the High Court order splitting the disputed site into three parts and said that status quo will remain. The two-judge bench of Supreme Court remarked that the High Court ruling was surprising as no party wanted a split of the site.

2018 April 6 - Supreme Court of India ruled against the immediate constitution of a larger bench to hear the case.