In 1965, shortly after the India-China war of 1962, the Chinese accused the Indian soldiers of stealing '800 sheep and 59 yaks' belonging to China. China was driving high from its exploits of 1962 and was looking at an opportunity to initiate another armed conflict with India.

India-China relations are going through turbulent times. In the last few weeks, the anti-China sentiment in India has been at an all-time high, in the aftermath of the Galwan Valley clash between the Indian Army and the Chinese People's Liberation Army (PLA) which left both sides with casualties.

In the past, there have been many such incidents when India and China have been at odds with each other. Be it the agreement on the Line of Actual Control (LAC) or naming Pak backed terrorists on world forums.

But one such incident of hard yet humourous diplomacy is worth a special mention. On this occasion, a young Atal Bihari Vajpayee showed utter political brilliance to tame the dragon through a herd of sheep.

In 1965, a few years after the India-China war of 1962, the Chinese ridiculously accused the Indian soldiers of stealing '800 sheep and 59 yaks' belonging to China. China was driving high from its exploits of 1962 and was looking at an opportunity to initiate another armed conflict with India.

Point to be noted here is that during this same time, India was fighting the Pakistani infiltrators (Operation Gibraltar) in the then state of Jammu and Kashmir, this conflict later led to the war of 1965 between India and Pakistan.

So the period was not conducive for India to prolonged two-front conflict.

The Chinese wrote a letter to the Indian government accusing the soldiers of stealing the sheep and the yaks and asked the Indians to return them at priority, or there will be consequences.

Vajpayee, 42 years old then, was a Member of Parliament. He arranged for a herd of 800 sheep and marched them right up to the Chinese Embassy in New Delhi. The sheep had placards hung around their neck which read -- "Eat Me But Save the World". 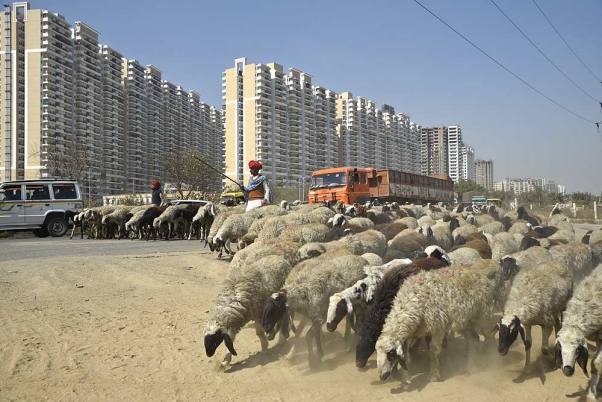 This infuriated China. They considered this as an insult to the Chinese nation. China again wrote a letter to the then Indian Prime Minister Lal Bahadur Shastri. China accused the Indian government of backing Atal Bihari Vajpayee's protest in New Delhi.

The Indian government responded with a letter of its own. "Some of the citizens of Delhi took in procession about 800 sheep. The Government of India had nothing to do with this demonstration. It was a spontaneous, peaceful and good-humoured expression of the resentment of the citizens of Delhi against the Chinese ultimatum and the threat of war against India on trumped-up and trivial issues," the letter read.

This incident became the topic point amongst people who were still in the hangover of the 1962 war, standing up to China was a big step then.

Two years later, the Chinese did give a shot at a misadventure in the Nathu La pass area but were shelled out of the region, quite literally, by the Indian Armed Forces.

WATCH | Mastak Nahi Jhukega: This poem by Vajpayee has a message for countries eyeing Indian land in Kashmir