The latest report states that Taarak Mehta Ka Ooltah Chashmah actor Bhavya Gandhi's father Vinod Gandhi passed away due to COVID-19 complications. He was admitted to Kokilaben Ambani Hospital after testing positive and was on ventilator support. Gogi aka Samay Shah from the show confirmed the news through an emotional post on Instagram.

People love Taarak Mehta Ka Ooltah Chashmah and which is why they keep track of what is going on with the show and the cast. The latest report in Dainik Bhaskar states that actor Bhavya Gandhi's father Vinod Gandhi passed away due to COVID-19 complications. He was admitted to Mumbai’s Kokilaben Ambani Hospital after testing positive and was on ventilator support for the last 10 days. He reportedly died last night and is now survived by his wife Yashodha and sons Nischit and Bhavya. The family has not released any official statement yet. However, it was Bhavya's co-star and friend Samay Shah who took to Instagram and shared an emotional note for his father. For those unversed, Samay is known for playing the role of Gogi while Bhavya played Tappu aka Tipendra Lal Gada in the show. However, he quit the soap opera in the year 2017. 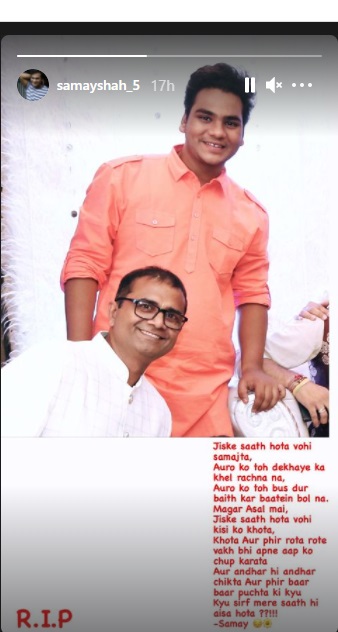 The report about Bhavya's father also stated that the actor was supposed to attend his cousin Samay Shah’s sister's wedding but due to his father's ill-health, he attended the same virtually. His father Vinod Gandhi was professionally in the construction business.

Bhavya rose to fame because of his stint in Taarak Mehta Ka Ooltah Chashmah for 9 years but quit the SITCOM to explore new opportunities. Have a look at some of his pics here:

Ever since his exit from the show, he has been away from the small screen but has done some Gujarati movies. He still shares a close bond with the cast including Dilip Joshi, Disha Vakani who played his on-screen parents.

Actor Kush from the show who is seen playing the character of Goli also tested positive for COVID-19. Not only him but three other crew members contracted the virus while the shooting was on.