IND vs PAK T20 World Cup: The excitement among the TV celebrities Hina Khan, Gauahar Khan, Rohit Roy and others for this greatest match of all times is on an all-time high on social media.

As  audience gear up to watch the iconic match between India and Pakistan on Sunday, October 24 several television celebrities also could not resist and took to social media to express their excitement. The India vs Pakistan T20 match will be held in Dubai and is indeed one of the greatest face off's. Hina Khan shared a fun video on Instagram where she can be seen wearing a blue t-shirt, painting the tricolour on her face, fries, and a glass of juice. The actress seems pretty excited about it and wrote on social media: "Chak de India #BlueSuadArmy #ICCT20WorldCup #FeelItReelIt #BlueReelArmy #T20ReelSquad #ReelsWithHK "

Gauahar Khan also shared a dance video expressing her excitement. Alongside, she wrote: "Accha batao who is excited about the #t20worldcup ! tomorrow is gonna be a super exciting match !!! Can u tell me how many cricketing actions have I done in my #reel ??? #GoIndia #bleedblue #BlueReelArmy #t20reelsquad (sic)"

Rohit Bose Roy also pointed out a hilarious combination of face-offs and wrote, "Some of the greatest rivals face off today.... India-Pakistan, Manchester United- Liverpool, Real Madrid - Barcelona... And then there’s Karwachauth to @manasijoshiroy #SuperSunday (sic)"

Karan Wahi also took to Instagram and shared the poster of the match. 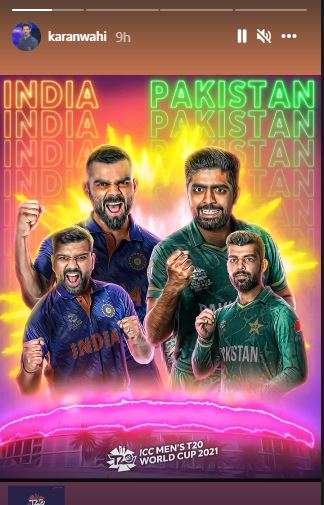 Meanwhile, Pakistan captain Babar Azam won the toss and elected to bowl first against India in a high-octane Group 2 match in Super 12 of the ICC Men's T20 World Cup at the Dubai International Stadium.